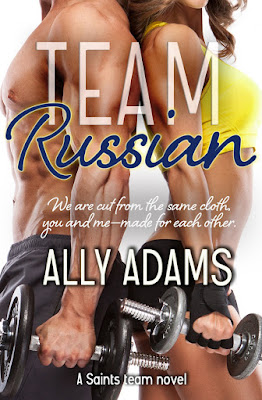 He’s tall, dark, handsome and athletic and just that little bit mysterious. Star of the Saint’s team, The Russian has had a high profile relationship with a Hollywood director’s daughter for years and now that it is over, he just wants to focus on his sporting career. Due to injury, Carla Brooker’s professional sporting career as a basketballer with the Suns is about to come to an end, but not before she needs a date for her team's gala ball night. When these two sporting hotshots meet, they are more than a good fit, they are made for each other … if they can just file away their history and find a way to be together.

I’m due to record a quick interview in the Club Room with a player nicknamed Buzz – a Defender just back from injury and playing for the hottest sports team known to man, well woman – the Saints. Room Three; I check the number, wander in and holy-naked-guys-getting-rub-downs … it appears I’m one of the few with clothes on.

Half a dozen faces turn and smile at me; I see a flash of glowing tight, tanned butts, muscly legs, toned arms, even a groin or two that was just ‘out there’.

“Ah, sorry wrong room,” I say, as I stumble backward, trying not to look anywhere but out the door.

“Are you looking for the coach?” a voice from the corner booms.

I put my hands over my eyes, web my fingers a little which sets them off laughing again and look towards the voice. It was The Russian.

“No, I’m after Buzz, he said to meet at this time in Room Three.” My face was burning red, but I think other parts of my body were enjoying it.

I could see several of the physios shaking their head, smiling, and the youngest answered.

“I’ll give him funny when I see him,” I muttered.

“Thank you,” I said, spinning on my heels to leave before I was magnetically drawn to that tall, dark, and gorgeous hunk of a man in the corner. Mm, The Russian.

What The Reviewers Are Saying About The Saints Team Series

“Team Lucas should come with a warning: once you start you won’t be able to put this Saints team novel down until the very end,” ~ Jaymy M

“It was hot, sexy and passionate. I wasn’t expecting to fall in love with this novel so much but I did and I love the author even more for doing just that!” ~ Christine, Goodreads

“This is one of the best sports romances I ever read. I have re-read it now a couple of times and each time I fall in love with it a bit more.” ~ Claudia, Goodreads

“So much fun to read. Really, the sometimes funny and witty dialogues between the leads were just amazing. I would have to quote half the book here just to try to give you my favorite examples.” ~ Jeri T. Ryan

“This is a hot, steamy read filled with passion from beginning to end … a great read for readers who love hot guys and hot stories…and women who have a head on their shoulders.” ~ Tonja Drecker

“Ms. Ally had me sold and hostage from the very first page.You need to read the story!” ~ Darlene, Goodreads

Ally Adams is a journalist who lives in coastal Victoria, Australia with her husband and furry friends.

She is a literature major, avid romance reader and writer. Ally freelances for two lifestyle magazines and has just completed her fourth Saints Team novel. She is now looking towards a whole new series!

Check Out All The Stops On The Blitz For More Chances To Win
Posted by Unknown at 03:00