Book Blitz & Giveaway ~ Shape of My Heart by Khardine Gray

Like a Phoenix from the Ashes, True Love Can Arise from Illness and Death.

An aspiring fashion designer, Amy’s life changes when her mother suddenly falls ill. Her mother needs lifesaving surgery, and it’s up to Amy to acquire the funds.

A famous and highly valued football player, Josh has an incredible lifetime of excellence in his sport. His life crumbles when his mother and sister are killed in a car crash while on their way to see his last game of the season. Distraught with self-loathing and self-blame, Josh descends into a life of alcoholism and loose women that threatens to ruin his football career and possibly his life.

A friend sets Amy up with a job as a PA at the LA PR Agency which represents Josh’s football team, the Gladiators. Her task is to whip Josh into shape mentally and physically for the next football season.

From Worst Person in the World to Love of a Lifetime?

Shocked to her core, Amy discovers that Josh is the worst person in the world. His daily protests, unsavory habits and loose women are unbelievable. Josh is equally annoyed with Amy. As Amy gets Josh to see some hope, a spark is kindled…

Will that spark grow into a flaming romance? Or will they return to their regular lives?

A series of female giggles pierced the silence. She looked upstairs to where the sound resonated and saw two women in barely there bikini’s running down the steps. Behind them was Joshua Mancini himself wearing a pair of shorts and a black t-shirt. He was chasing the women.

Amy geared herself up to meet her new employer. Even if she was appalled at the state of the house she had to make that first impression a good one.

As he got closer she saw that he was truly handsome indeed with his sleek muscle and untamed pride. What she saw online was totally drool-worthy, but those images had nothing on the real-life Joshua Mancini who was six feet six, extremely well built with a ridged wall of a chest that bulged against the soft fabric of his t- shirt. He was breathtaking to look at with his black shiny, spiky hair, tanned skin and piercing eyes with an unusual mix of blue and green. Turquoise. That was the color. It was turquoise like the sea in somewhere like the Caribbean. Not that she’d ever been, but she’d seen enough pictures.

He was the kind of man that made you want to stare, even against your will. She quickly adjusted herself and her focus. It would do her no good to go all girlie weak-kneed and turn into some babbling buffoon in front of him. She had to look professional.

He looked her over with appreciation as he made his descent down the stairs and stopped a few paces away from her, making her feel like a dwarf even in her heels that added an extra two inches to her mere five feet and four inches. The women joined him and giggled as they tried to fix each other’s hair.

“Good, the stripper’s here,” he said with a wide smile that revealed super gorgeous dimples in his exotic high cheek bones. It took her a second or two to realize that he was referring to her.

“No, no I’m from the agency,” she replied quickly. “I’m Amy, your new PA.” That was when he looked up at her and narrowed his eyes. “If you could just point me in the direction of the office I’ll get started.”

There, that was professional.

To her surprise, however, he started to laugh. It was the usual sort of off balanced laughter you’d expect from someone who was truly wasted and didn’t know what they were even laughing at. “Those people are jokers.”

“This is no joke. I’ll take care of all your paperwork and everything.” She offered a smile.

“Ha, ha. Everything? Well you can start in there.” He set his square jaw in a firm line and pointed to the mess in the living room. “Clean that up will you.”

Her mouth dropped. She attempted to protest but he just walked away, leaving her there to gawk at the crazy mess.

Khardine Gray is a contemporary romance author who lives in England with her husband and two kids. She is well travelled, cultured, and a woman with a passion for dancing and ice skating.

When not writing you can catch her shopping, indulging on pizza and hot chocolate, or hanging out with her family and friends.

No need to spend money on an airline ticket. Simply pick up one of Khardine's books to become immersed in the fascinating stories and characters she creates. 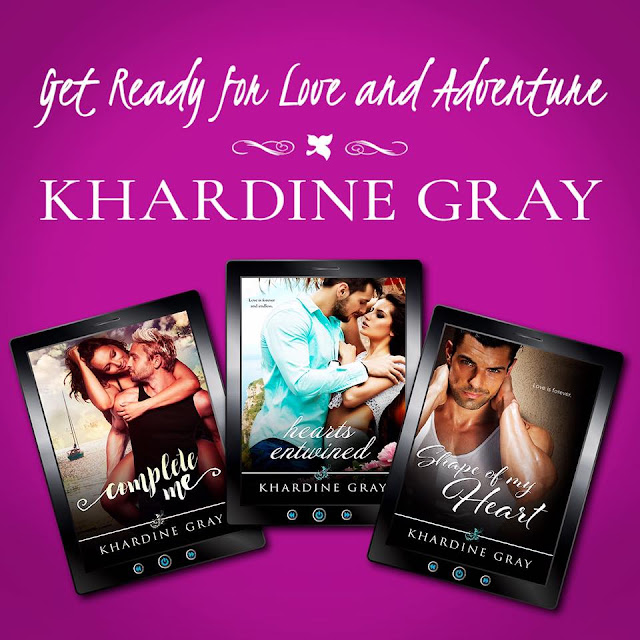 Khardine Gray is giving away an e-copy of her latest release, The Shape of My Heart. For your chance to win, simply enter via the Rafflecopter below. The contest closes at midnight EST on August 11, 2017, and is open to entrants worldwide.