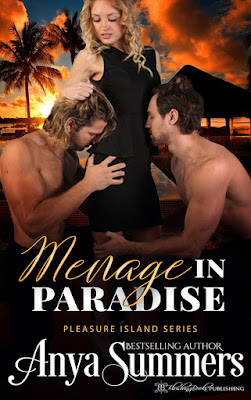 Ian has wanted Olivia from the moment they first met. They shared a torrid one-night-stand in Scotland a year prior and never spoke of it again. Now they are business partners, and Ian has plans to woo Olivia back into his bed permanently.

Eric Thomas is a drummer from the superstar rock band, The Harbingers. When he meets Olivia, he knows there’s something different about her. He wants her – and not just for the night.

But when the two Doms cause a stir with their antics on Pleasure Island as they each attempt to win Olivia, they will be forced to contemplate another means of attaining their prize. Can they convince Olivia to experience the fantasy of a ménage with them? And will what happens on Pleasure Island stay that way?

Publisher’s Note: While this steamy ménage is part of the bestselling Pleasure Island series, it can be read and enjoyed on its own.

Adrift and unsteady, he braced himself against the swells as the ferry moved through the cobalt waves like a hungry sea creature.

Eyes shielded behind a pair of aviator sunglasses, Eric surveyed the rest of the passengers aboard Goddess of the Sea. In addition to their boat captain, Deke, a Dom with the bearing of a boxer, there were four couples present on deck whom, after a quick perusal when they first arrived, he had ignored.

He wasn’t intentionally being an ass. Not this time.

And on Pleasure Island, with the non-disclosure agreement every guest must sign, he could sue the pants off anyone who leaked information to the press.

Besides, out of everyone on board the vessel, it was the lone beauty on deck who captured his attention. The name of the ship, Goddess of the Sea, perfectly described the willowy blonde poised at the stern. In skinny jeans that accentuated her endlessly long, supple legs and a gauzy peasant top that rivaled the sea in color, she had seized his full attention.

He had to admit she was stunning. The way the sunlight illuminated the waves of her golden tresses that stopped mid-back made her look like a beacon, a shimmering gemstone. No man, no Dom worth his salt, would want to deny himself the pleasure of her company.

He’d done enough of that.

Denying himself. That stopped, now.

Eric’s intentions on Pleasure Island were simple. Find himself a submissive and fuck himself into a state of orgasmic bliss over the next two weeks. Hopefully one that he could maintain once he left the island.

And, he prayed, the most effective cure for his malaise. Not to mention, it was doctor ordered: the fun, the frivolity to be had on the island, as a way to battle his misery.

And damn it all, he needed to feel happy. It had been too long since anything had stirred his lethargy. Not a stay at an exclusive facility in Switzerland to help his depression, where his bandmates believed he was getting it on with a ski instructor. Not all the accolades, fame or fortune that had come his way through The Harbingers’ success.

And he hated that it made him sound like a pansy ass wanker.

Over the next two weeks, on what was becoming the legendary Pleasure Island, he would soothe his battered soul and the depression surrounding him. And the beautiful woman standing all alone was a damned fine place to begin.

Anya is a bestselling and award-winning author published in multiple fiction genres. She also writes urban fantasy and paranormal romance under the name Maggie Mae Gallagher. A total geek at her core, when she is not writing, she adores attending the latest comic con or spending time with her family. She currently lives in the Midwest with her two furry felines.
Visit her website here

Her Highland Master, Book 1
To Master and Defend, Book 2
Two Doms for Kara, Book 3
His Driven Domme, Book 4
Her Country Master, Book 5
Love Me, Master Me, Book 6
Submit To Me, Book 7
Her Wired Dom, Book 8