Blurb Blitz & Giveaway ~ Lie To Her by Mehrisa Mex

Lie to Her
by Mehrisa Mex
Genre: Psychological Thriller 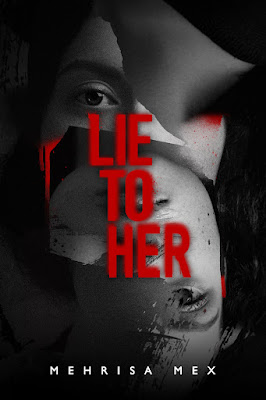 Despite years of treatment, twenty-one year old Lydia still struggles with trauma from being attacked as a teenager. House-bound with anxieties and haunted by ghostly visions, she soon comes to suspect her psychiatrist husband, Myles, of sabotaging her recovery.

Her pursuit of the truth uncovers secrets more terrible than she ever imagined and it soon becomes clear that nothing is as it seems and no one can be trusted – not even herself.

She drew out a baseball bat from the cupboard and gripped it tightly. Then she swung it at the camera on the landing until she was sure she had destroyed it.

She thundered down the stairs and knocked out the one in the hallway. She then went about smashing the one in Myles's study. She was out of breath by the end of it, but also completely exhilarated.

Now out of view of any detectable surveillance camera, she went over to his desk drawer, which was locked. She hoped the gun was still in there and she tugged on it on the off-chance that it was a bad lock. No such luck.

With her hands shaking from the adrenaline, she pulled the hairpins out of her jeans pocket and laid them out on the desk. Her eyelids fluttered as she surveyed them. What was she thinking? She couldn't do this.

You've done it before a hundred times.

"That was years ago." Her days of picking locked liquor cabinets were long past her.

She bit the soft end off one of the hairpins and pulled it apart while bending the rounded end of another pin into a lever. She pressed the lever hairpin into the lock cylinder and with the other one, she began to work on shifting the spring-loaded internal pins into their required position.

At any moment, it would all be over. The doors of the house would fly open and people would come crashing in to get her - the unstable fugitive, the runaway lab rat.

Mehrisa Mex writes mystery-thrillers, neo-noir and international crime. She often appears in her own imagination lit in the chiaroscuro style of film noir and narrating thoughts to herself in moody, hard-boiled tones.

Be sure to check out each stop on this blitz for additional chances to win.