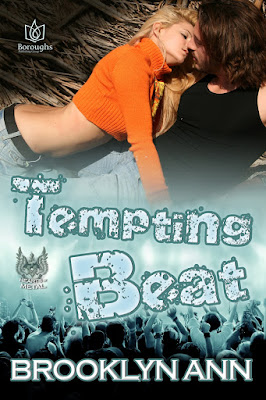 Bleeding Vengeance’s drummer, Roderick Powell knows he’s a sod for feeling glum, especially after moving into a beautiful new home in a smart Denver suburb. But all his mates are partnered or married, and dreadfully happy. It’s enough to make a rockstar rethink his options. And even though his sexy neighbor has given him the brush-off, he’s decided to have another go – at this point he has nothing left to lose, apart from his heart.

Gwen Mason’s romantic past has been bumpier than most – twice divorced by thirty, she’s had enough of broken promises. An ER nurse who keeps a brutal schedule, she’s happy to become known as the neighborhood crazy cat lady. But…the most delicious man has moved next door. He’s British, he’s famous, he’s a rockstar. And, hard as she tries, Gwen can't keep Rod Powell from breaking all her rules, and suddenly she sees a future she never believed possible.

Gwen’s eyes widened. “Do you think all five of them are moving into the place?”

“Lord, I hope not.” Mrs. Kersh’s lips thinned like a junior high schoolteacher’s. Suddenly she gasped. “The first one is coming this way.”

Sure enough, Mr. Hotness was striding up Gwen’s lawn with a smile that made her breath hitch. “Cheers, new neighbors. I’m Roderick Powell. I thought I’d introduce myself to you lovely ladies and get the rundown of the neighborhood.”

He had a British accent. Gwen nearly melted in her seat. It wasn’t fair. Her belly fluttered like an infatuated teenager’s as she rose on shaking legs and shook his hand.

“I’m Gwenda Mason.” Oh God, his grip was so warm and strong, and some delicious scent radiated from him. She fought to keep her head straight and not stammer. “I’m your next-door neighbor.” She cringed as his brow lifted with amusement at her stating the obvious. “I mean, ah…” She pointed at her other neighbor to clarify. “This is Mrs. Kersh. She lives across the street from me.”

Mrs. Kersh stiffened on the bench swing and gave him a stiff nod instead of a handshake. “Where are you from, Mr. Powell?”

“Los Angeles.” At her suspicious frown he added, “But I was born in Lancashire, England.”

“And what do you do?” she demanded, casting a baleful glare at one of his speaker cabinets being hauled up his walkway.

“I’m a drummer.” He confirmed their suspicions. “But don’t worry, I’m installing sound-proofing panels in my music room, which will be in the basement.” Roderick tossed the question back. “And what do you do, Mrs. Kersh?”

“I’m retired.” Mrs. Kersh said primly. “Are those others going to be living here as well?” She pointed at the other gorgeous men and the beautiful women beside them.

Roderick shook his head. “No, they’re only helping me move.” At Mrs. Kersh’s loud sigh of relief, he chuckled and turned to Gwen. “And what do you do, Gwenda?”

Her skin flushed under his gaze. “I’m a nurse.”

A startled laugh escaped her lips. “Did you just make an Animaniacs reference at me?” She’d grown up with that cartoon. For a moment she wondered how he knew about that old show, but then realized that it was probably streaming online somewhere.

He nodded, still grinning. “Sorry, luv. That was cheeky. Couldn’t help it.”

Mrs. Kersh sniffed in disapproval while heat flooded to Gwen’s face at the casual endearment. She should disapprove as well. Her young neighbor shouldn’t address her with flirtatious terms. That would get them off to a bad start. Yet she didn’t have the heart to reprimand him. Besides, it could be a Brit thing. It probably didn’t mean anything more than other English terms she’d heard like “ducky.”

Gwen changed the subject. “So you’re going to be living in that big house all alone?” At first it seemed like an odd thing, but then she remembered that she’d done the same. Yes, she’d been awarded the house in the divorce, but she could have sold the place and had a much smaller mortgage. For her, keeping the house was a matter of pride, comfort, storage, and the unspoken hope to maybe have room for someone else.

“I’ve had bigger,” he answered with a wink, though for a moment there was a flicker of pain in his gray eyes.

Formerly an auto-mechanic, Brooklyn Ann thrives on writing Romance featuring unconventional heroines and heroes who adore them. After writing historical paranormal romance in her critically acclaimed “Scandals with Bite” series and urban fantasy in her “Brides of Prophecy” novels, she now explores the chaotic realm of heavy metal music— a difficult world to find love in.

Be sure to check out all the stops on his blast for additional chances to win.