It's time to mate!

Mated on Hades by Golden Angel is here!!!

Get It Only On Amazon

Read it for #Free if you're a KU subscriber!

The Celestial Mates agency always knows what - or who - you need.

Tarrik would do anything to avoid breaking his mother's heart, so he begrudgingly signs up for Celestial Mates and agrees to come home and settle down once the agency finds his match. There's just one catch: he's not ready to give up his free and easy life traveling the galaxy. And he's doing exactly as his mother asked, so what will it hurt if he makes himself as unappealing as possible on his mate application?

Juliette is a woman on the run. Her attitude, and more importantly her hacking skills, have pissed off all the wrong people. Now the target of a contract hit, she's decided the solution to her problems is to leave the planet as fast as she can. The Celestial Mates program is exactly what she needs. By the time her "mate" realizes she's impossible to live with, hopefully it will be safe for her to return to earth. She wasn't counting on a seriously hot alien who looked like the devil and could do the most sinful things with his tail...

The sparks fly at first meeting when their chemistry ignites. But they can barely stand to be in the same room with each other.

They shouldn't work at all. 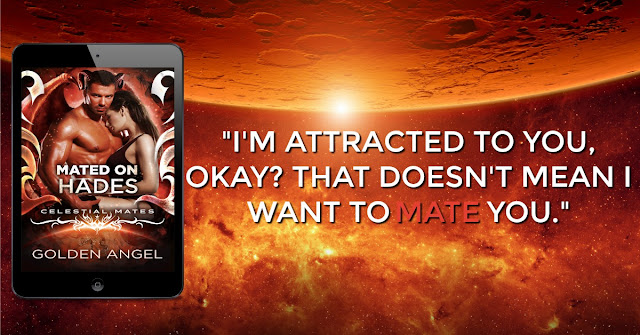