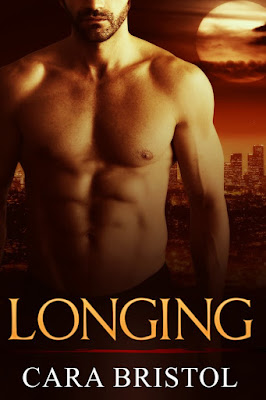 
Spurned by vampire society because of his mixed blood, Luc despairs of finding his one true mate. Then he meets her, and they share a single night of passion. Can he convince her to accept a Half Breed, or will that one night have to last him for an eternity?

An excerpt from Longing

In this scene, the heroine, using an alias, meets the hero for the first time.

A single lit sconce cast the luxurious room into deep shadows. After the door latched behind her with a quiet click, she set her overnight case in the entry and tiptoed into the sitting area to deposit her purse on a table. All the furniture appeared constructed of old wood, the soft pieces of silk brocade.

She listened for rustling in the other rooms, of which there appeared to be several, but heard not a sound. Instead of the relief she’d expected, disappointment settled on her like a heavy winter coat. What if the guy didn’t show? What if she’d been stood up?

Her gaze alighted on an open bottle of red wine resting on a distinctive, olive wood, leather-topped bar. Other than water, red wine was the only beverage she could tolerate since her transformation.

Maybe she could borrow some courage, settle her jangling nerves with a drink. Would it be rude if she started on the wine before her date arrived? She picked up the bottle and studied the label, French, from some unfamiliar region.

“Je t’ai attendue toute ma vie.” A man materialized from a dark corner of the suite.

Lily screamed and dropped the bottle.

He flew from across the room and caught it before it hit the floor.

“Let me help you with that.” He said in English this time, his voice like dark chocolate—rich and smooth but with an underlying bite.

She stared, mesmerized into immobility by his seductive tone and aquamarine eyes that matched her pendant. Short, thick hair, as stark as a moonless night, swept back from his forehead. He wasn’t a pretty man, or even a handsome one; life had hewn the angles of his face roughly, almost brutally, but he exuded an indefinable allure. Stubble fashionably darkened his square jaw, although she had a hunch he followed no fad—nor any man’s dictates.

Despite her high heels, his height forced her to tilt her head back to look at him, a circumstance that made her feel both overpowered and protected. Lily swallowed. “I’m sorry…for screaming.”

“No, it’s my fault. I startled you. I should have made my presence known the moment you walked in. I’m Luc, by the way.”

“Chéri.” He pronounced her name with a French accent, although he sounded American. She rather liked how her fake name sounded on his lips, but wished she could hear him utter her real one.

“It’s a pleasure to meet you.” His growl stroked her like a rough caress.

Longing is a revision of A Scent of Longing, an older novellete, that perhaps only six people in the world have read. I’ve “revamped” the story and rereleased it.


If you're looking for a quick love story to get you through your day, then look no further!

Cara Bristol brings us a story about a newly turned vamp, Lily, just starting to live her life again. The hopes and dreams she once had, now much be forgotten thanks to one fateful night that changed everything.

Luc has always been an outcast due to his half blood status. He's been searching for his mate for many centuries and has all but given up hope at finding her.

Luc decides to make a last ditch effort and signed up with a dating agency. Lily's best friends decides to help her along and sends Lily's information to the same agency.

Lily goes to the date with an open mind, although scared since she's not exactly sure what she's getting herself into. Luc wants to leave, but then he'll always wonder what if.

Luckily their nights goes well, very well indeed. The only problem would be the secrets each are keeping. Now that everything is laid out, will they but all that behind them or will those secrets tear them apart?

This was a defiant feel good story. It's lighthearted but also intense. The characters, although supernatural, are very relatable; they have the same desires as their human counterparts. This fast paced story will endear these characters to you as you join them in their quest for an everlasting love.

Cara has lived many places in the United States, but currently lives in Missouri with her husband. She has two grown stepkids.

When she’s not writing, she enjoys reading and traveling.