STIRRING UP DIRTY
Stirred by Love: Book 1
By Kacey Hammell 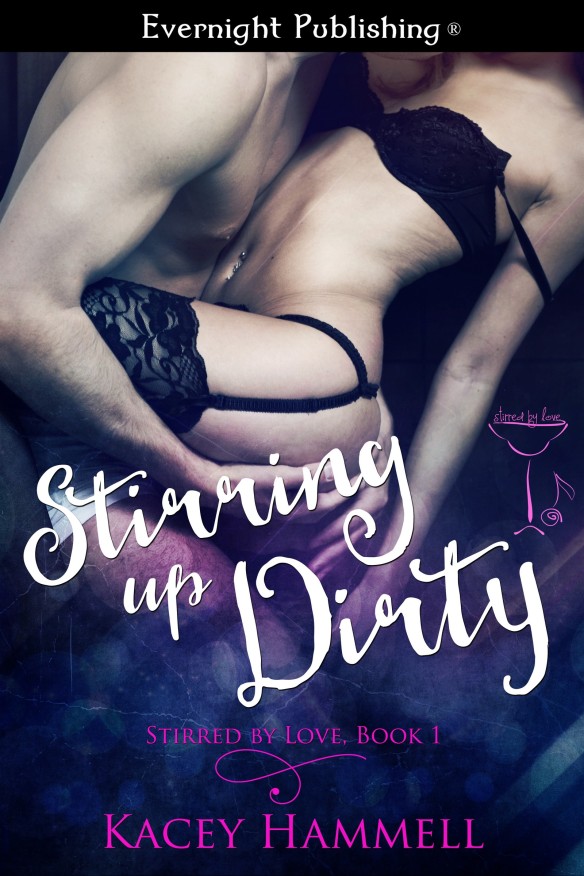 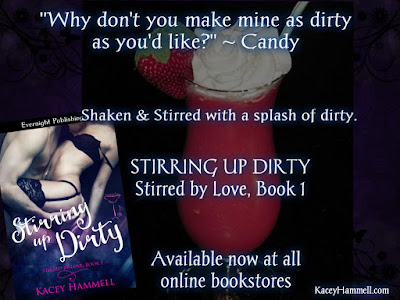 Shaken and Stirred with a splash of dirty.

Candy Wilson arrives in St. Albert with one mission—to sign the next young, hot model to her modeling agency. She has no time for distractions and isn’t prepared for bartender Eric McKenna—the brother of her young client-to-be, Melissa. Eric challenges her on all counts, irritates her daily, and heats her body to boiling temperatures with just one touch. He’s hard to ignore and impossible to resist.

Eric McKenna will be damned if his baby sister signs any contracts with Candy Wilson. No way in hell will he allow anyone to whisk Melissa off to a foreign country and lead her on a path that’s not right for her. And yet Candy pushes him further than he’s ever been before and drives him crazy. Eric can’t control his need for her or the desire to engage with her … on so many levels. 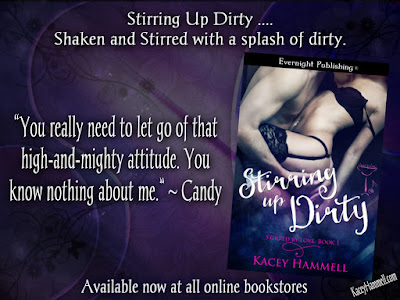 He stalled and pivoted. Behind him was the one person he didn’t need to see right now. Melissa had talked about her enough that he knew all he needed to about her. And some shit he hadn’t cared to.

She leaned against the wall of Abe’s Diner. “Little? This place is huge. I did enjoy some shopping this morning. The market a couple blocks over has some of the nicest things. I spent way more than I should.”

He bet she did. From what she’d shown at the bar yesterday, she had more money than she really knew what to do with. In his opinion, she’d earned it all by letting it all hang out in fashion magazines for the world to see. Wearing skimpy outfits and bathing suits, which to him was too much to be taken seriously. She had the looks for sure, but he questioned her morals.

“Well, I have to get back to the bar. Nice seeing you.”

“Oh, you couldn’t spare a few minutes to have coffee with me? There are a few things I’d love to talk to you about.” She sidled closer to him, a smile lighting her face, her eyes twinkling like stars in the evening sky.

He bet she was used to getting her way all the time.

She brushed a hand over his bicep. “Just a quick coffee, and maybe a bite to eat?”

The heat from her palm rushed through him. His fingers tingled and the urge to feel her warmth around him caught him off guard. He took a step back and shook his head. Damn her for getting to him. He needed to steer clear. She would do anything to take his sister away from here, even use her wiles to do it; he’d seen her flirting with Drew yesterday.

“Sorry, I don’t have time to entertain you. You’ll have to find someone else to keep you occupied, Ms. Wilson. Have a good day.”

Eric turned and strode away. He needed to keep a watchful eye on his sister and find a way to dig himself out of the hole he was in.

Neither would be easy, though.

Not with the distraction of Candy Wilson around to battle with. 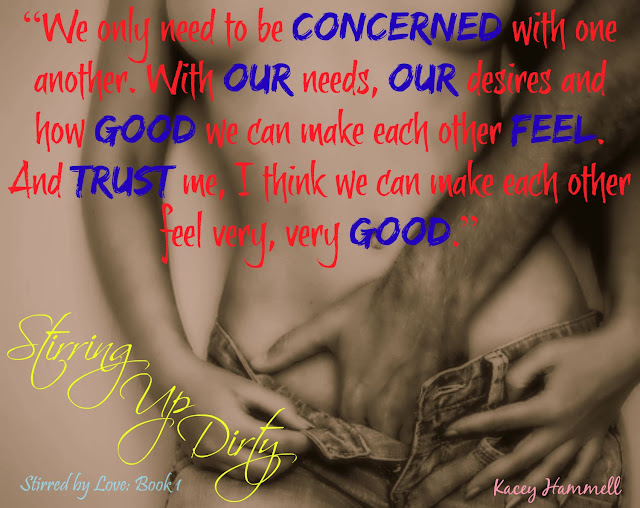 A stunning woman, Candy, comes to town and walks into the town bar. She there on business but the tall drink of water standing in front of her is making her reexamine her hopes and dreams.

Eric has been running the family bar since his stepfather left it to him and his siblings. But he's set in his ways, the oldest, the leader, the protector. He's struggling to keep the bar afloat, but he'll do whatever it takes to keep his family together. The last thing he's going to let happen is to let his baby sister go off to Europe to pursue her dream of being a model.

His plan has one big flaw, Candy. Candy believes that Melissa has what it takes and she wants to sign Melissa to her new company. She believes in her so much, that's why she's here and she'll do anything for the girl that is like a sister. The tempers fly between Eric and Candy but more than there, there is a strong sexual tension between them. Seriously, the electricity between them radiates off the pages.

But like all stubborn men, Eric puts his foot in his mouth that could cause Candy running in the opposite direction and never look back.

I really loved this fast paced story. The banter between Eric and Candy is thrilling and their sensual innuendos are sizzling. With this stunningly delicious story, we also get an update on a long beloved couple. Besides, any guy that can make a dirty daiquiri is ace in my book. 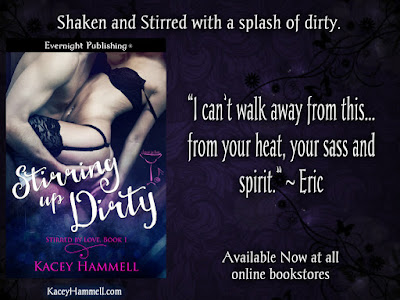 There was no way she’d tell Melissa she had the hots for her oldest brother. “All is good. Is there anything I can help you with, though? I waited tables once. A lot of years ago, but I’d be happy to help.” Besides, it would get her mind off the hot-blooded male behind the bar who made her want to hop over it and take him right there. A full room of customers or not.

“No. Absolutely not. I didn’t ask you to meet me here so I could put you to work.” Melissa glanced over her shoulder when one of the customers yelled for her and raised one finger. She turned back to Candy. “Maybe we should meet tomorrow?”

Candy nodded. “Sounds good. Come by my hotel, okay? But for now,” she slid from the booth, “put me to work. What can I do?”

Melissa stood and hugged her, then pointed to the corner. “Well, I’m behind in getting out more nuts. The bowls on the bar and tables need refilling. I have enough to get some done now, but we’ll be closing in an hour and will need more. If you don’t mind, could you grab some?”

“Thank you so much. They’re on the very back wall, third shelf from the bottom.” Another customer hollered for Melissa’s attention. “Thanks again,” she said before hurrying off.

The girl was meant for bigger and better. Not that there was anything wrong with working hard for a living, but her long and lean figure, her regal neckline and great posture would be better served on a runway or in a magazine than hustling from table to table.

She strode across the room to the side door Melissa had directed her to. The door was ajar, held open with a small wooden crate. She pushed the crate inside and entered, shutting the door behind her.

“Damn it. Who let the door close? Drew, fuck, you know better.” The masculine voice from somewhere in the back startled her. Thankfully she recognized the voice or she’d have been screaming bloody murder about being locked in a room with a stranger.

“Sorry, Eric. It’s Candy. I closed the door.” She moved further into the room and around one large utility shelving unit.

“Christ, what the hell are you doing in here?”

She found him near the back wall, piling boxes of what looked like the nuts she had to find on a small cart.

“I was giving Melissa a hand.” She pointed at the item in his hand. “I was going to take them out for her, for after closing, and give her a hand.”

He snorted, set down the case and reached for another one. “I don’t think a woman like you would be into this type of work. Don’t want you breaking a nail or anything like that.”

He raised his head and glared at her.

“Don’t look at me like that, either. I’m no stranger to hard work.” She scanned the room. Jesus, wasn’t there air-conditioning in this little closet? She pulled at the neckline of her scoop neck top. “Anything else I can help with?”

Eric set aside the last case and leaned against the shelf. His arms crossed over his chest, and Candy tried to ignore the bulging biceps that stood out beneath the sleeves of his grey t-shirt.

Her heart skipped and her pussy throbbed. Just when she thought she’d shoved the need for him aside, he had to go and look all manly and tasty standing there.

“I thought you were here to whisk my sister off somewhere?” She hated that he could see right through her plans. “Or are you here for a job? No longer young enough for those crazy sharks in magazines these days?”

Oh the bastard knew how to cut her to the quick. She wasn’t a washed-up has-been, but her time in the fashion and modeling limelight had come and gone. “You really need to let go of that high-and-mighty attitude. You know nothing about me. Now,” she waved her arms, “anything here need to be taken out front?”

He smirked, and she wanted to slap him. But he shrugged and pointed to the shelf above her head. “I need that red box there brought down. The blue one beside it too. They aren’t heavy, just napkins.”

She nodded and lifted her arms. In her six-inch heels it was hard to reach so high, and she widened her stance for better balance. The tips of her fingers eased the red box closer to the edge for her to grab the sides. She lowered it and set it on the stack of cases he had on the cart.

“I’m glad I can help. Melissa looked a bit frazzled out there. She is a hard worker.”

He coughed. “We all grew up working hard.”

Candy reached for the blue box and nodded. “It seems like a great family unit that you all have.” Crap, this one was a bit farther back. She felt a breeze cross her skin as her top rose, baring her midriff. She wobbled on her heels. Shit. That’s all she needed was to fall on her ass while in a skirt and look like a fool.

Warm hands suddenly circled her waist. Gasping, she drew in a deep breath and grabbed on to the shelf with both hands as he touched her.


“Easy there, darlin’. Those heels aren’t exactly made for working.” His searing breath washed over her neck. Electric currents spread along her skin, igniting and firing to life. Goddamn, goddamn. 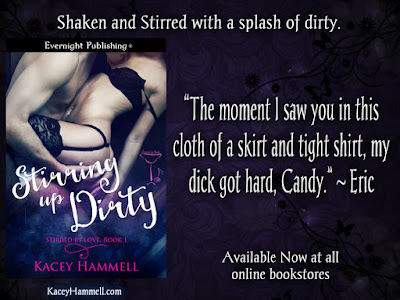 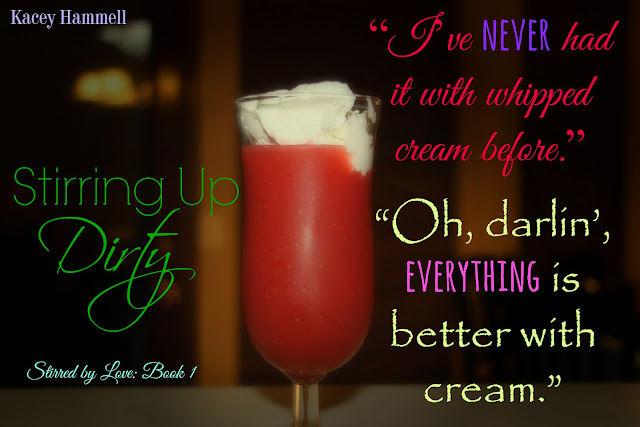