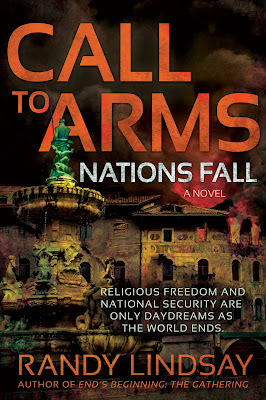 Joining the military had seemed like the right thing to do, but when war breaks out in Europe Robert wonders if he hasn’t made the biggest mistake of his life. The Russian juggernaut grinds its way toward , the country Robert has grown to love. As one of a handful of American soldiers in the area, he must find a way to help the ragged remnants of NATO’s forces to prevent any more European nations from falling.

While back home, the rest of the Williams family struggles to protect themselves in the face of an impending civil war. The very fabric of society continues to unravel, threatening the destruction of the Constitution and the American way of life.

As Vice President, Calvin McCord continues to defy both sides of the political divide in order to find a solution to the war in , the ravaging of the , and an espionage ring within the White House.

RANDY LINDSAY is a native of . He lives in with his wife, five of his nine children, and a hyper-active imagination.

His wife calls him the “Storyman” because he sees everything as material for a good story. Randy’s first novel, The Gathering: End’s Beginning, was published in 2014. He has also been published in several anthologies during 2013-2014.

I love top ten lists. I post them on my website whenever I can find an excuse to do one.
In fact, I’m thinking I should put one together on my ten favorite top ten lists.
Before I do that I better finish my list of Randy’s Ten Favorite Things.