Catarina Stone is a woman of mystery, and she likes to keep it that way. But she is thrust into the limelight when two of her “girls” are slain by a serial killer. The Tampa Madame, as she has been dubbed by the press, is being hounded by the media who want to find a connection between the killer and her. She reaches out to Andreas Marino of The Marino Bros.

Cat has done her research, and knows she needs a professional, a person experienced in catching psychopaths. She needs Andreas. The police are baffled, and the killer must be caught before another one of her girls is mutilated, then murdered.

Andreas Marino, the striking eldest Marino, does know serial killers. It used to be his job. But not anymore. Not since one of those sick bastards claimed his parent’s lives, and destroyed his own. He doesn’t want this case, not at all. Not until he sees her.

The strikingly elegant Madame intrigues him. She is an enigma. And, Andreas can’t get her out of his head . . . and the need to have her in his bed. When she shows him copies of the note left by the killer, signed “Beautiful No More,” the thought of her exquisiteness destroyed reignite a flame in him he thought long dead. He must catch a killer. He must save the girl. If he doesn’t, Andreas will be lost this time . . . forever.

Beautiful No More is the final book in The Bounty Hunters - The Marino Bros. 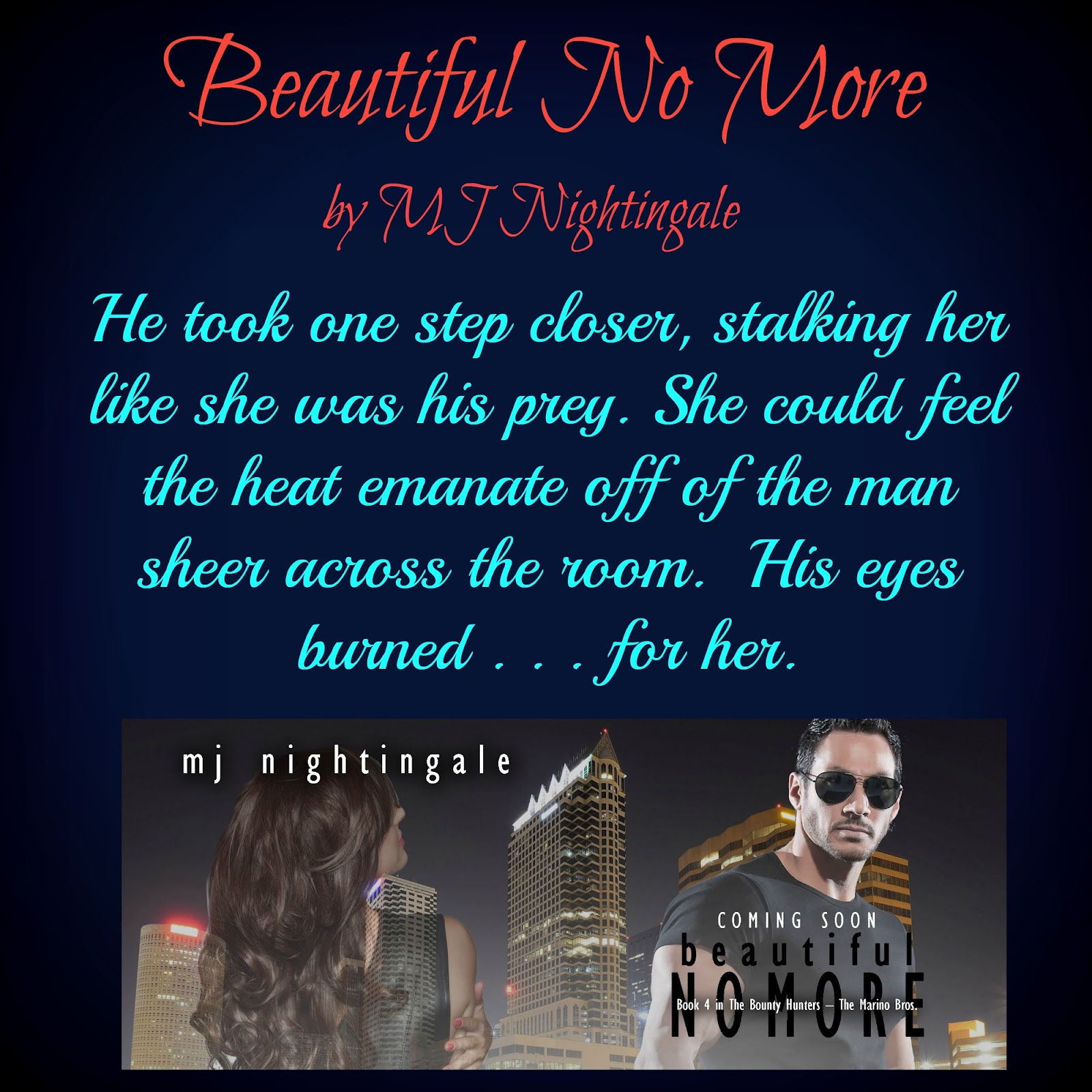 
Still is, he thought.


He scooted closer to the wall, repositioned himself for comfort, and then once again brought his face to the small hole he had made in the closet. Placing his eye over the peephole he watched, and remembered.


Catarina Stone was standing before her mirror brushing out the tangles in her thick black hair as she blow dried it to make it smooth. His palms itched to touch her hair. He felt himself getting hard.


She wore a simple white nightgown that reached her knees. Her feet were bare. What he could see of her legs showed him she was still fit. Perfect. He adjusted his erection choking back the groan that threatened to escape from his lips.


He had to sit back for a moment, collect himself.


He counted to twenty, and then leaned forward again to watch.


She had unplugged her blow dryer, then disappeared into the bathroom, and he cursed his impatience. He watched until his eyes began to water, trying not to blink so he wouldn't miss her coming back into the room. He'd be able to catch a glimpse of her face then.


It seemed like forever. But ten minutes later she emerged from her ensuite, and grabbed the remote off her high boy dresser.


He nearly choked back a sob at her beauty. The whore. That's what she had been, still was. Yet he loved her. She had been kind to him once. That was when it began, twelve years ago. Catarina was thirty-one now. But he still remembered her at nineteen. He'd been just a few years older. Only twenty-two. She'd disappeared. Vanished. Then everything had come crashing down around him. His father still rotted in jail, but he'd managed to escape. But for two years he'd yearned for her. Her smile. Those eyes that glowed grey with flecks of gold. She hadn't smiled much then. But for him she had. They had been friends, he'd thought.


He'd brought her extra food, books to write in. She was always writing in her little books. He'd asked her about them once. She said they were her diaries. But they were all in Dutch. Her language. She was born in Amsterdam. She'd told him that.


He got bits and pieces out of her when he brought her treats. But he never dared to stay too long in her presence then. He didn't want his father to find out, plus she was a working girl. One of his father’s many slaves.


Catarina stood, legs slightly apart by her bed. She was close enough to touch. He wanted to touch her. He'd never dared. He sniffed at the wall trying to inhale her scent as he imagined stroking her thighs, cupping her.


His cock hardened even more, and it became so painful. Yet he resisted.


Catarina settled on Bay News 9, a local twenty-four hour news program. She always did that. She'd surf the local stations, but always chose the news. She set the timer on the remote so the television would shut itself off in forty-five minutes, and placed it on her night stand. She quickly crawled into bed. She always slept in the middle. On her back, then in the night she would roll to her side away from him.


It never took her long either. She was usually out in fifteen minutes, and then came the turn. Away from him. Just like before.


He watched. He waited. And just like clockwork, she fell asleep.


After she turned, only then did he grasp his cock in his hand after fishing it out of his pants, and jerk off. He came silently, but wanted to scream her name. Catarina. He silently lifted his closed fist, and pretended to smash the wall that separated them. He cleaned himself up, and got ready to go to work. He covered the hole with white putty that he'd be able to remove tomorrow. But now he had hallways to vacuum, mirrors to clean, and banisters to polish. The Trump Towers in Tampa did not clean itself. And he needed to hurry. This wasn't even his floor.


Salvatore shut the closet door, and padded out of the empty apartment. The owners were snowbirds, and they were gone for eight long, beautiful months of the year. That gave him time—plenty of time. He hummed softly as he hit the stairwell taking him back down to the seventh and eighth floors.


He immediately got to work upon finding his cart.


Ah, Catarina. He'd missed her. And she brought back those urges he thought he'd been able to suppress. A plan began to form. He hadn't done anything bad in nine years. Nine long, lonely years. And she had made him do it when she disappeared.


Twelve years ago, this beauty had escaped him. She wouldn't do that again, he vowed. Never again. If she tried, she would be beautiful no more. 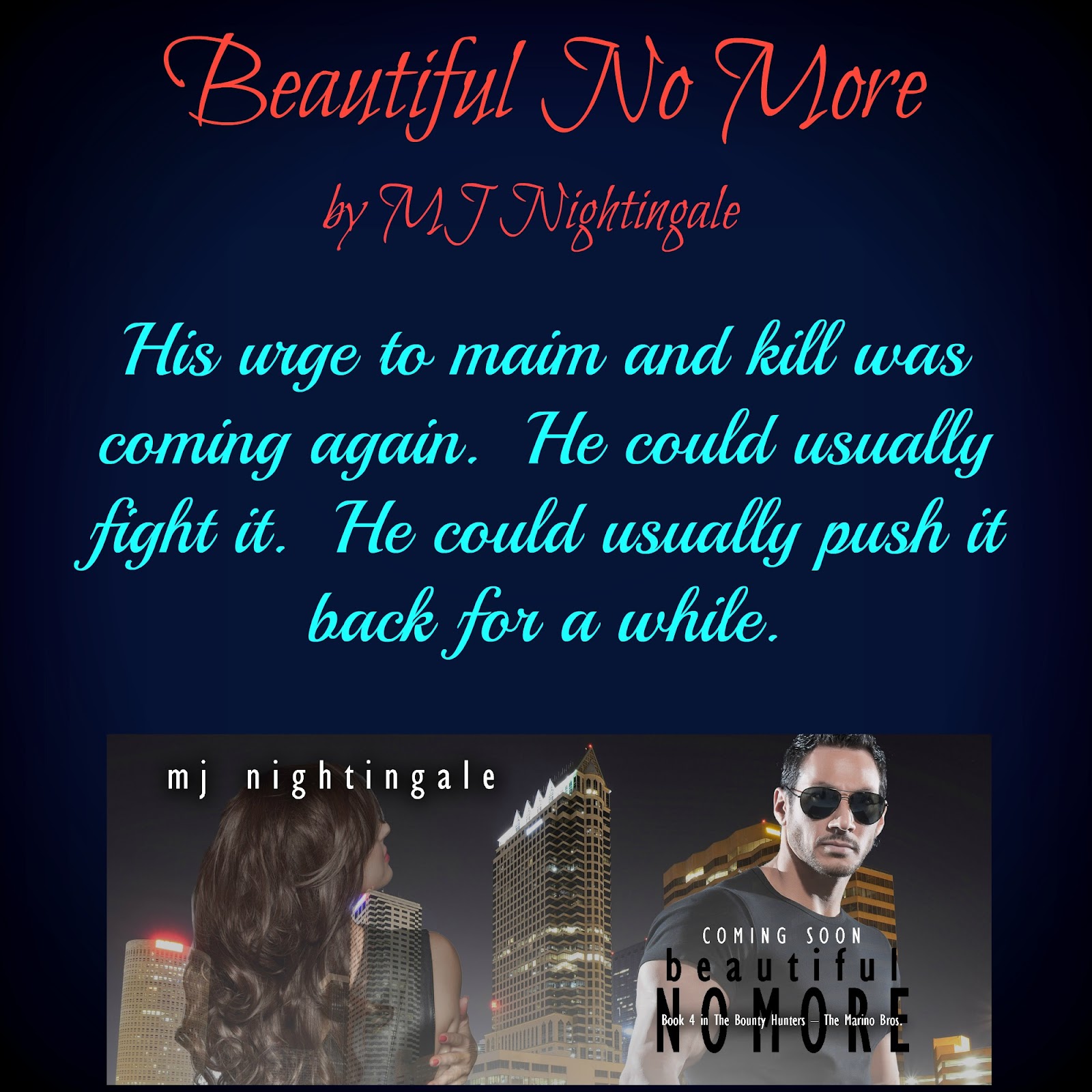 
MJ Nightingale has been a teacher for over two decades. Writing is her new career, and something she has wanted to do for a very long time. But reading has been a part of her life since she was a child. She has been an avid lover of romance novels, and they have always held a special place in her heart. When not working, or writing, or spending time with her children, she devours books all summer long, and any type of fiction; thrillers, crime, suspense, contemporary, and drama.