Resisting His Mate
Part of the Bad Alpha Evernight Anthology
is now available! 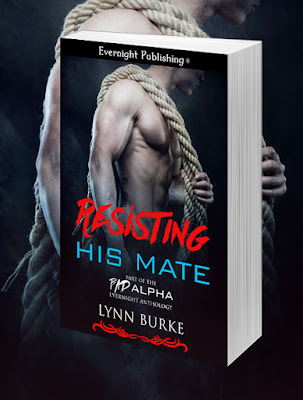 Warrick Keaton eludes a forced pairing with one of his kind. No one is going to choose his mate for him, not when he wants nothing to do with being tied down to a woman. He never expects fate to intervene in the form of a freezing, barely alive female. With his independence in jeopardy, Warrick fights his inner hawk's desire to stake a claim on her.

Clare Byron longs to escape her domineering ex-husband, a jealous bear shifter determined to keep her prisoner. She seizes the opportunity to run and lands in the arms of another alpha—exactly what she doesn’t want or need.

For Warrick, Clare is everything he's ever wanted in a mate and all that he's run from.

For Clare, Warrick is freedom in a way she never dreamed possible—the one man who will own her heart yet give her wings to fly.

Excerpt from Resisting His Mate:

No fucking way, Warrick grumbled to himself as his feathers retracted, and human skin once more covered his body.

A female, the one thing he had no interest in—the thing that he’d traveled across the country to escape. And she floated down the river, sporting a black and blue eye, appearing half-frozen and ready to take a short jaunt with the grim reaper.

Warrick ran his fingers through his shoulder-length hair, cursing his damn luck. Only back at his summer home for two days, finally getting time away from his demanding job with the CIA, and a battered female is tossed in his path?

Even worse, his inner bird had decided to bond with the woman and latched onto her soul like a motherfucker.

With a growl, Warrick sprinted toward the river. Naked and shoeless, he jumped over brush and fallen logs, focused on the female his animal half demanded he rescue.

He reached the shore. The log she’d clung to lay half-submerged far downriver.

Maybe he was too late, and she’d given in to the freezing water. “Couldn’t be that lucky,” he grumbled, taking off south.

Dragging marks showed where she’d pulled herself up and out of the river. Stepping on light feet, and ears straining, Warrick followed her trail to a dip in the land where leaves had piled. The wet tracks disappeared, and he squatted down, scanning the ground for sign of her.

A lock of dark hair caught his eye.

The female had buried herself beneath the leaves, but she didn’t stir.

Passed out or dead?

“Hopefully the latter,” Warrick mumbled, staring at the matted hair. He recalled the fear and anxiety that had shown through her eyes. Eyes the same damn color as his. “Fuck.”

Without another thought, he reached through the leaves and lifted her into his arms. Her head lolled back. A weak pulse beat in her neck. The stench of unwashed body and … bear wafted past his nose. Instant rage kicked his stomach.

Jaw clenched, Warrick clutched her freezing form close and cursed the lush curve of her ass beneath his hand. Fucking prick had a mind of its own and obviously didn’t give a shit about body odor or the fact she’d recently been with his northern enemies.

“I don’t have time for this shit,” he ground out between his teeth while starting toward home. He needed to unload the burden, and quick. His brother was better with women—he’d drop her at Heath’s and hightail it to his own place before the woman opened her eyes and swamped his soul with emotion again.