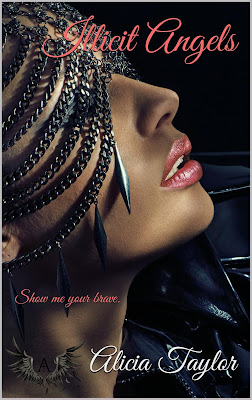 Eternity Rivera had a fairy tale life until one fateful night intruders stormed her home, destroying it and her parents in their passing, leaving her and her baby sister behind. With the help of her uncle, she soon learns that life moves on, until a monster comes lurking into her room at night. When she finally makes the decision to change her life for the better, Eternity is hit with another life-altering blow. Sometimes life is cruel and unkind and kicks you up the arse, leading you down a dark path you want nothing to do with. Sometimes we don't have a choice.

Ryke Justice has lived his life in purgatory for the last ten years, but to him, it’s just another day in the office. They don't call him Justice for no reason; you mess with the boss and you're messing with him. Justice will come and you won't even be expecting it. That is until an Angel finally turns his head and becomes the envy of every girl there. She ignites his desires, stirring his black soul back to life, but is she strong enough to withstand his monster?

Can Eternity save Justice from himself? Can Ryke finally give into his deepest darkest desires? Has his monster finally met his mate?

Choices will be made, Justice will be served, and things are about to get hot. It's time to go to the dark side.

This story is part of a six part series, each approx. 50-60k words in length.


“Welcome, Eternity.” His voice has a deep baritone, and it seems to vibrate deep in my bones. “Please come and take a seat.” His tone holds no room for argument and I find my feet taking me to sit in the chair across from him before my brain registers the motion. “I’m going to tell you how things work here. I don’t want you to speak. You will hear me out, and I will answer any questions you have after I’ve finished. Do you understand?” I nod my head, too afraid to speak. This man is pure evil. It emanates from him in dark clouds, covering me in shadows. He seems to loom over me but that’s impossible; he’s five feet away from me.

“I’m going to tell you a story. This is your story. When I’ve finished it, you will understand what we expect of you. Okay?” At my nod, he begins my story. “A long time ago, your father approached me. He made a deal with me, and you were the promise. You became club property, but this deal had conditions. I accepted all your father’s conditions and everything was running smoothly. That was, until you fucking disappeared. Vanished into thin air,” he says. Black Eyes takes a deep breath through his nose, and his jaw clenches tightly. “That deal was broken the minute you went underground. When you resurfaced, I came for what was mine.”

I try to process his words. If what he’s saying is the truth, then Carlos was right. My daddy did sell me. But he thinks I’ve been underground, whatever that means. If it means what I think it does, then he is crazy. This isn’t some mob story. This is my life.

“What was–” I don’t get to finish my question. Black Eyes stands, knocking his leather seat back against the wall. He slams his hands on his desk, and the noise bounces around the room, echoing. I hold my breath and wait for him to speak.

“I said you speak when I’ve fucking finished. You said you understood. If you don’t, little girl, then I will make you understand. I’ll fucking gag you. Keep your mouth shut, otherwise I’ll make you. We clear?” he growls. His voice rises, anger lacing his words. My breath hitches, but I remain silent. “Good girl,” he says in a calmer voice. “Illicit Angels is exactly what it implies in the title. Rich men pay an exorbitant amount of money to fuck beautiful girls – beautiful Angels, to be more precise. It’s indecent. It’s immoral. It’s illicit.”

“Rich men buy their way in but, occasionally, we allow a promise. A promise is a sale. We get the gift of a new girl. They gain entry. When a promise is broken, we end that promise. A long time ago, you should have been taken out. Wiped out,” he hisses. “You disappeared before that could happen. Now that you’re back in our clutches and I can see your potential, there are a few choices to make, Eternity. You see, I want that promise back, but a new deal had to be struck. I can’t just take a promise back. It would be bad for business. In this life, you should already be dead.”

My brain swirls with questions, but I’m frozen. Stuck in his story. What choices are there? My daddy wanted into this club? He wanted to cheat on my mum? Why would he want to come here? Surely, if he wanted to cheat, then he could have picked up a mistress. He didn’t need to sell me. He chose to. Hate and hurt ripples through my veins, hot and swift.

“You get six months before you’re claimed, Eternity,” Black Eyes says, drawing my attention back to him. “Six months to make a good impression. You can’t be a promise, but you can be a new Angel. For the first month, the bidders can only look at you and touch bare skin. The next two months, they can taste you. Give you untold pleasure,” he says nonchalantly. Black Eyes speaks as if we’re discussing the bloody weather, and his cool demeanour makes me want to scream. I don’t want goddamn pleasure. “The following three months they can give and receive pleasure. They’ll teach you how they like it and you will learn to submit to their every demand. Their every need. At the six-month mark, they will bid. The winning bidder will own you. You will become theirs to control, theirs to use, theirs to do with as they damn well please. I’m sure their first order of business will be to strip you of your virginity. That little lining inside will make you pussy gold. They’ll pay a pretty penny for you. There is one slight problem. Your promise wants you, and it seems he’s willing to stake his claim now. You have six months to make your decision, Eternity. You can persuade a bidder to want you enough to go up against Justice, or you can face the man himself and accept your fate. Justice won’t let you go. He’ll fight until you’re his. You have to decide which route to follow. Both will result in you being Justice’s, but you can fight for something better. I’m not sure you’re strong enough to withstand Justice’s darkness.”

Once he’s finished talking, he just stares at me, captivating me with his pitch black eyes. I want to speak, but I’m not sure if he’s testing me so I stay quiet. Black Eye’s smirks and nods his head.
“Good girl,” he praises. It was a test! “Do you understand what is to happen over the next six months?” I nod my head but still don’t say a word. “Do you accept these terms?” Black clouds swamp my mind. This is all too much. I don’t want any of this. I didn’t choose any of this, and I won’t accept it. But I’m too scared to answer him. A chill darts down my spine when anger twists his face at my non-response, and a frisson of fear, cold and brewing, unfurls in my stomach. “Do. You. Accept. These. Fucking. Terms?” he spits, each word separated and angry. When I still don’t answer, he storms around his desk to stand beside me. I flinch, expecting a blow, but none comes. I peek up at him and find him panting in rage. “Speak,” he growls.

“What if…” I pause, clearing my throat. My mouth is dry and terror is overwhelming me. “What if I don’t accept?” I ask, hesitantly. Black Eyes laughs at me, a sparkle of delight fills his soulless gaze.
“Well, here is your problem. I was made a promise, and that promise wasn’t fulfilled. I want the debt paid. I was promised a daughter, and I’m going to have one. I know Rivera has two daughters,” he drawls, pausing to let his words sink in. My eyes widen when I get where he’s going with this. I shake my head. This can’t be happening. “Little Nevaeh is acceptable as payment, but I thought you would want to accept the fate your father gave you rather than subject your baby sister to it. I’m more than happy to have Nevaeh in your place if you don’t accept.”

“No,” I gasp. Emotion, swift and violent, rushes through me. I’ve spent the last four years protecting my sister. I won’t let it all be for nothing. “I’ll do it,” I weep. “I’ll stay.”

“I thought you might,” he replies, smugly. “Now you just have to decide if you’re going to fight for your place or be consumed by Justice.”

“Who is Justice?” I whisper, brokenly.

“He’s someone who will destroy you, little girl. You’re not strong enough to be with him. Justice will swallow you whole.”


“Because you made him feel,” he empathises. “But I can see you’re not strong enough. If you break at this point, then you are too weak to go against him.” 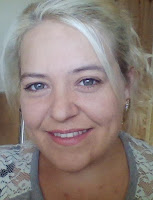 I was born and raised in the East. I live with my family and mass of animals - I'm a huge family and animal lover.

Writing powerful love stories and creating Alpha males with a dash of darkness has become a passion of mine, and I have many stories and characters swirling in my head that I can't wait to share with you all.

Is it weird to have so many voices in my head? I'm not crazy, I promise... maybe a little bit.