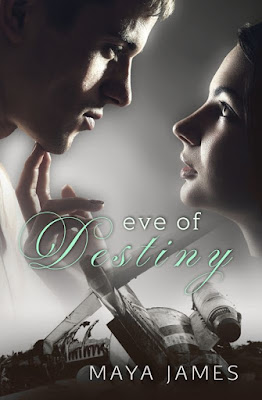 Adam vanishing from her life hasn't been as easy for Evette to forget about as she'd hoped in this finale to the novella, Fate: Adam & Evette.

No matter what distractions Evette creates for herself, the memories of her short but intense love affair refuse to fade. An unexpected encounter with someone from Adam's past reveals the awful truth of his fate and the plane crash that has plagued Evette's subconscious. New and old friendships converge around her for support and with them comes a new purpose, the sole survivor of the accident that took Adam. A young man named Mark Zimmerman, with his devoted father at his side, becomes Evette's obsession. But with Mark's recovery and entire future offering no promises at all, is she placing her heart on an impossible hope?
Unexpected love, forgotten revenge, lifelong secrets, forgiveness, loss, and unrelenting passion all await Evette on her path from fate.


(The conclusion of Fate: Adam and Evette)

East coast born and raised, I'm married, extremely happily, with 4 kids, 3 of which are now young adults (not sure when that happened).

I’m a COO in my technology-based "day job,” which requires a mix of technical and creative writing for both internal and client-facing materials, but it was not satisfying my artistic spirit. Writing the “Charity” series has been absolutely fulfilling and exciting.

My favorite writing takes place on my phone while lying on the Southernmost Beach in Key West, where I try to go at least twice a year.

I can't hold it in anymore, not another day. Every time I'm captured in his eyes I want to shout it. I feel him in every inch of my sole, and the pressure never has any release. I love him. I want him. There is primal need to express my love for him that I'm denying every day and it has become an animal; not a peaceful, playful baby animal, this is King fucking Kong. I love him so much I wanna slap his perfect face until the words fall out of his mouth.

I cannot feel his body pressed against mine for one more night and not do something about it. My clothes have to come off. His I'm going to rip into shreds and not give a damn if I'm clawing him up in the process. Those would be war wounds, scars to remind him that you can't keep my love trapped and waiting like this.

His eyes say the words all of the time to me. I love you, Evette. He looks at me like I'm something he's never seen before, something we wants to stare at for the rest of his life. I want you, Evette. So just say it already! 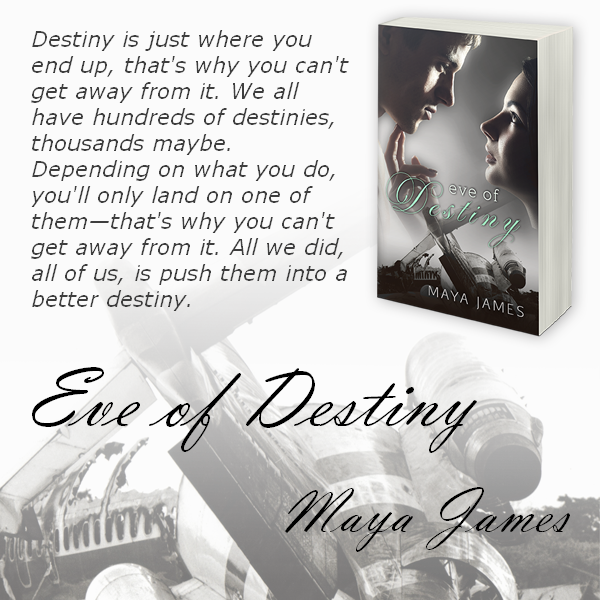 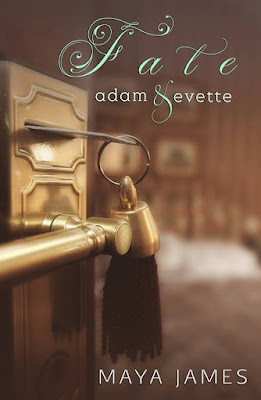 Fate is a fast paced novella about two people from opposite ends of the country trying to support each other as friends while denying their instant attraction for one another.

Adam and Evette have both recently ended relationships that were never meant to last. Each of them is longing for something more intense and meaningful, and fate brings them together online in a support system for rebounding daters. The only problem—they’re perfect for each other but too far away to do anything about it.

Will they help each other find love with someone else, or will Fate completely take over their destiny? 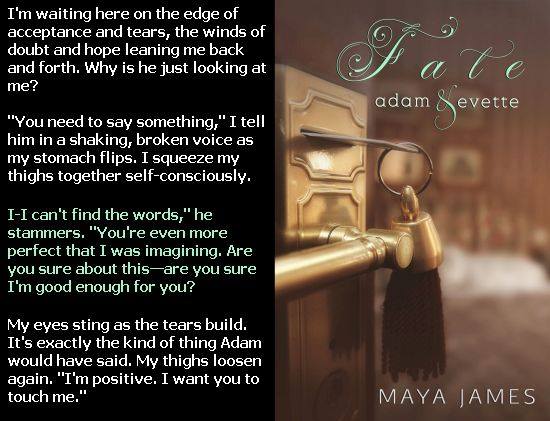