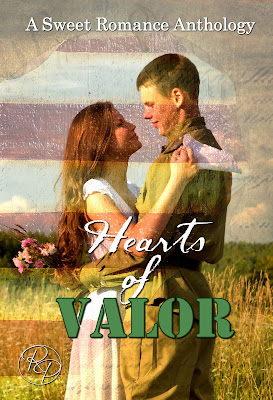 Description: It takes a heart of valor to survive love's battlefield.

Six veteran themed romantic tales brimming with love and sacrifice are sure to show us all what it truly means to have a Heart of Valor.

Hero of Her Heart - S.L. Hughson


Nicole Taylor has loved Vincent for years. Now he’s back from serving in the Army, and she’s determined to make him see her as something other than a little sister.


After a heated Valentine’s date, Nicole is confused by Vince’s withdrawal. She confronts him, but no matter how hot their physical attraction, he keeps backing away.

Nicole helps him follow his lifelong dreams but he drifts further from her happily-ever-after plans. What will it take for him to see he is truly the hero of her heart?

Kerry only wanted to do right by Christopher. To protect him from the whispers of 'coward' and the shame of a white feather.

But the war doesn't look like a grand adventure any more. All Kerry wants is Chris home safe. But will he still be the same man she once knew?

Confederate POW, Braxton Bolton, had an unexpected visitor the day before his execution, when Arabella Anderson walked into his jail cell and, in front of other POWs, kissed him until he shook with desire.

Two years prior, she had been the Lieutenant Colonel’s prisoner. While she was tortured and raped by the other Confederate soldiers, Bolton was different. He protected her from further suffering, and the grateful young woman had come to repay his kindness. While they became more and more intimate, she learned the story behind his kindness.

But what she learned turned the sweet girl into a fearsome warrior, one determined to save the soldier with a noble heart.

How will Jack be able to put Iraq behind him and return home to Leah and their two children? The green peaceful coast of Ireland is the perfect landing zone from the brown violent landscape of Mesopotamia. Jack is humping ruck along the North Atlantic coast when a chance encounter with an Irish maiden turns him all around and he hears the voice of Leah in a magical moment calling him home.

Captain Quinn Alstrom of the U.S. Coast Guard was eager to start his newest post; however the excitement had nothing to do with the beautiful surroundings of Key West, and everything to do with his best friend’s wife.

Will Quinn’s surprise arrival in Veronica’s life re-spark the fire in the vivacious woman he remembered? Or, will the memory of her fallen husband stop the two of them from finding happiness?

Ever since they were kids, Joan dreamed of being Walt Herley’s wife. But, Joan's dream is short-lived when the Korean War draft has Walt trading his groom's suit for army fatigues. After a short celebration of their rushed nuptials, Walt is whisked away to fulfill his duty to his country, leaving Joan behind with a promise to return.

With her heart a world away, Joan struggles to keep her spirit afloat while praying for the war's expedient end.  Fate, however, has a plan of its own, one that threatens Joan’s faith in Walt’s promise to return.

Open only to those who can legally enter, receive and use an Amazon.com Gift Code.  No purchase necessary, but you must be 18 or older to enter. The winner will be chosen by rafflecopter, and announced on the widget. Winner well be notified by emailed and have 48 hours to respond or a new winner will be chosen. The number of entries received determines the odds of winning. Giveaway was organized by Roane Publishing's marketing department.
Posted by Unknown at 01:00