New Release & Review ~ Illusions, In The Arms of the Law #1, by Kacey Hammell 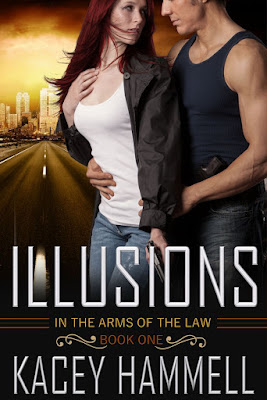 Author’s Note: Illusions was previously released with another publisher. It has received minor revisions for reissue. Also includes a bonus short story

Protection. Adventure. Love.
It's all found within The Arms of the Law...

Detective Isabella Knowles, a tough-as-nails cop, lives by the law, and knows what she wants out of life. And it doesn't include marriage or all that comes with it. Everything Isabella has ever known seems like an illusion when a new relationship makes her feel more alive than ever before.  She isn’t happy about it and fights it every step of the way.

Burned by his fiancée years ago, seer and P.I., Brady Jacobs never wants another commitment in his life.  But his bachelorhood and heart are threatened when he has one of his visions and see a killer striking too close to the woman he has recently come to love.

Danger lurks close to home and neither Brady nor Isabella like that they can’t control every situation…especially matters of the heart. 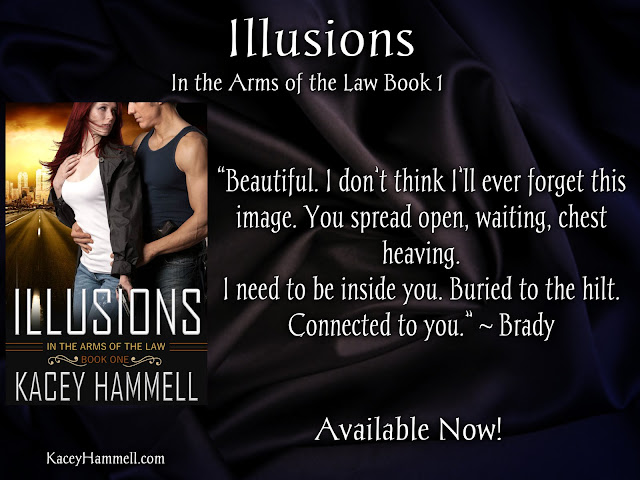 Replacing the receiver, she sighed, resigned to leave the comfort of her bed. “Got to go to work, Izzy?”

Brady’s voice came from behind her and not for the first time, Isabella wondered if he realized he used so many variants of her name. She had noticed it a lot in the last few weeks but didn’t think he did. Tonight, for some reason, it bothered her more than ever.

When he was driving into her or when they were warm and cozy, sharing a few quiet moments, he called her Bella. She found herself coming to enjoy every time the name rolled off his tongue. It was special to her but she didn’t want to dwell on why at the moment. Instead, she counted off in her head his use of Isabella.

When they were around others, coworkers or just talking in general, he used her full name. At times like this, when interrupted by her job, he used Izzy in a distant, unaffected tone. The tag was starting to grate on her nerves.

She twisted on an angle toward him, unable to keep from caressing his body with her gaze. The sheet only covered his hips and navel, leaving his abs and biceps exposed to her hungry eyes.

What I wouldn’t give for ten more minutes with him tonight.

“Umm, yeah. It was Connor. I have to go. A woman who’s been missing for thirty-six hours was found dead down by the docks.” She headed to her closet as Brady got off the bed.

Pulling a denim shirt from her closet and a pair of jeans, Isabella turned to look at him as he grabbed his clothes. Her breath hitched as he covered his tight ass with his Jockeys and jeans. It was a shame to see such perfection hidden.

With a small shake of her head, Isabella pulled herself from her musings and reached into her top dresser drawer for panties and a bra. “Yeah. The woman’s been missing for over a day and from what he said, she’s naked.” Her hands shook as she put on her panties and willed herself to calm down and think it all through.

“Connor didn’t say much else.” Turning her back to Brady, she shook out her jeans, put both legs in and pulled them up. So lost in her thoughts and trying to get a grip on her emotions, she didn’t hear him come up behind her, until he placed his hands on her shoulders.

Touched beyond means by his offer, she turned in his arms. “Thanks, but no.

You know I’ve been through it all before. Don’t make it a bigger deal than it has to be. I’ve seen this kind of thing many times, over and over.”

She sounded like a bitch but couldn’t let the fact they were having sex get in the way of her job. They had an unspoken agreement, no commitments, and let one another do what they had to do, never coddling each other or making bigger issues of anything.

“I know you have, Izzy, but sometimes…. Hell, never mind. It’s cool.” She could tell by the look in his eyes he was frustrated but didn’t want to show it.

Good, let him be pissed, irritated or anything other than caring. She understood he was a man used to taking care of others, but she’d be damned before she leaned on him.

After taking her gun from where it was locked up, she clipped the holster to the waistband of her slacks and adjusted it to where she liked it. Pulling her hair back into a scrunchie, she turned to face her lover, certain she had her emotions in check. “Thanks for coming over tonight. It was, as always, the exact thing I needed.”

For just a moment, she saw an emotion—maybe anger—cross his face, but it was gone so quickly she might have imagined it.

With what looked like a forced smile to her, Brady shrugged. “Always here for you, babe, whenever you have an itch.” His voice held the cold, detachment she was coming to dislike. He grabbed up his leather jacket near the door, but stopped before crossing the threshold. He turned to her, staring at her in a way she had never seen before. “I know you won’t—seriously know you won’t—but if you happen to need me, I’m only a phone call away.”

She couldn’t even ascertain what sensations spread through her body at his words. As she watched him walk out of her bedroom, she could identify only one emotion.

Feeling like she was on a tightrope easily broken at any moment, she shook herself of her musings as she heard the front door close. She patted her pockets and sides. Keys, badge, gun. She was ready to face the night ahead. Detective Isabella Knowles, one of Trenton’s finest, was ready to catch the bad guys. 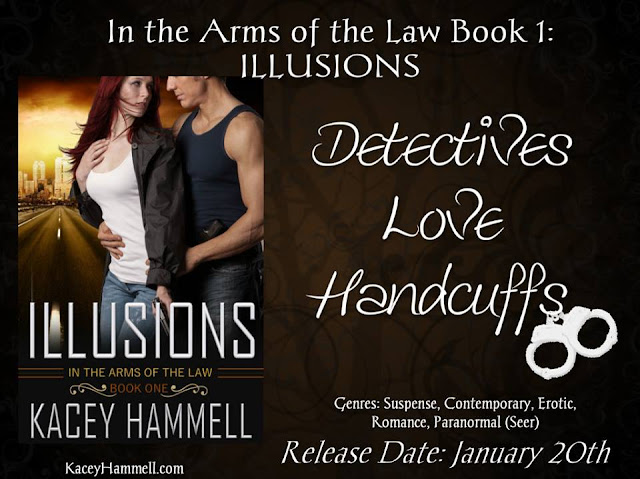 Isabella Knowles is the type of person you want to be friends with. She'll have your back and a very loyal friend. She's tough as nails and won't back down from a battle. A force to be reckoned with, to be sure.

She's been having an on again off again with a local PI, Brady Jacobs. She likes the no strings attached relationship, but he's starting to want more.

Brady isn't just a PI, he's also a seer. He's ability has helped his business and he'll assist the authorities when possible. He wasn't looking for more than what he and with Bella, but she's found a way into his heart whether she meant to or not.

Just as he's coming to terms with his feeling and attempting to convince Bella her heart wants the same, something disturbs their peaceful live.

Now they must face this danger head on, but will Bella come to terms with her feelings for Brady before it's too late?

I loved this fast paced, high action story. Brady is sexy and his ability is provacative. I love how he uses it for a good cause. Bella and Brady together are amazing. They have a sizzling connection that can't be diminished. This book is thrilling and the suspense will capture your imagination.

The the bonus short story really provided a happy ending for this fabulous couple.