Return of the Bad Boy
by Jessica Lemmon
Date of Publication: April 26, 2016

Asher Knight has three constants in his life: music, beautiful women, and a bottle of Jack. He lives for the next gig, the next city, and dreams only of a life spent in front of an arena full of screaming fans. But Asher's nomad ways come to a sudden stop when he learns he's the father of a three-year-old from a past relationship and suddenly this rock star bad boy is forced to put down roots.

Only she can clean up

Gloria Shields is no one's fool. Sure, the sexual chemistry between her and Asher has always been intense, but she'd never risk giving her heart to a man who has a perfect record for breaking them. Except the man desperate to make things right with his newfound son is nothing like the rock god she's guarded her heart against for years. And it isn't long before she starts to wonder if life with this bad boy might be the best thing that's ever happened to her.

A former job-hopper, Jessica Lemmon resides in Ohio with her husband and rescue dog. She holds a degree in graphic design currently gathering dust in an impressive frame. When she's not writing super-sexy heroes, she can be found cooking, drawing, drinking coffee (okay, wine), and eating potato chips. She firmly believes God gifts us with talents for a purpose, and with His help, you can create the life you want.

Jessica is a social media junkie who loves to hear from readers. 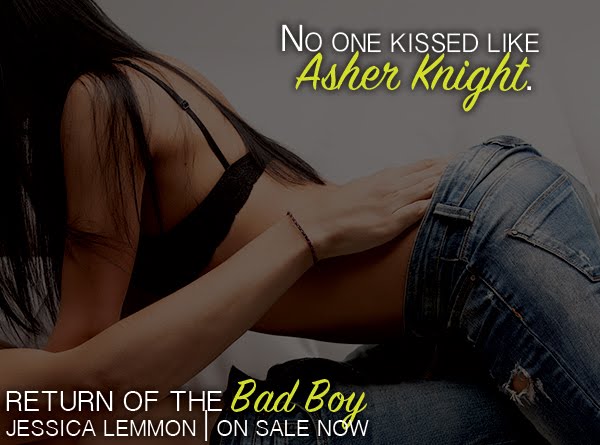 “You don’t own me, Asher Knight. You don’t get to be possessive when I’m on a date—”

“Yes, Asher. A date.” She leaned closer to him, fire in her eyes, her hair wild from the wind. “You don’t get to pull me into your life whenever you need help. I have a life, too.”

“I know that.” But she kept going.

“A life that is not in this house, that is not on this dock.” She pointed at the wooden slats they stood on now. “A life that shouldn’t be happening here, of all places.”

Okay, she’d officially thrown him. “What does my house have to do with anything?”

“How about the fact that I saved every dime I had to buy it?” She pointed at herself, poking red nails into her white dress. “I put down an offer and you outbid me. I was supposed to be living and working here, not playing family with a guy who only wants me sometimes!” She quit speaking when her voice became choked with emotion. He heard it. He saw it.

It took him a few seconds to piece together what she’d said.

“You put an offer on this house?” he asked, pointing at the deck.

She sniffed, crossing her arms and looking past him at the lake. “Yeah.”

“Why the fuck didn’t you tell me? I would have pulled my offer and let you buy it!”

“I know you would have!” she shouted, dropping her arms and going red in the face. “I didn’t want you to!”

He couldn’t win. And he also couldn’t keep from grabbing her face, tugging those lips to his, and kissing her with every ounce of passion and anger and whatever else flowed between them whenever they reached this point with each other.

Gloria responded like he expected, tugging his T-shirt in both fists as she dragged him closer. They’d always been a volatile mix, their arguing a twisted form of foreplay. But when Asher’s hands went to her hips and pulled her close, he found himself softening and her softening against him.

She pressed those pillowy breasts to his chest and looped her arms around his neck as he tilted his head to the side to make out with her as thoroughly as possible. She let out a muffled moan and he splayed his hand across her back, tucking her into him.

She tasted like everything he wanted but couldn’t have. Being this close wasn’t enough. Not for either of them. He could tell by the sweep of her tongue in his mouth she felt the same way. 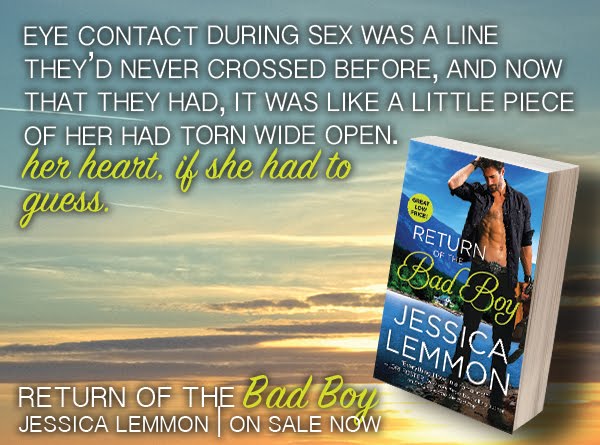 Who doesn't love a Bad Boy that has more heart than you would think at first glance? And if you add in a sexy, fiesty, and witty woman to the mix? That makes for one great book.

This bad boy rockstar told her years ago that she was it for him, and now he's going to make her believe it. Gloria has built walls around her heart, and it's going to take a lot of hard work to bring them down. It won't be easy, but these two are going to have some ups and downs along the way, but in the end it will be all worth it.

I really enjoyed Jessica's writing, engaging the reader from the word go until the very end. The emotions flow off the pages, connecting with the reader's heart and soul. Add in an adorable child and you'll be swooning right along with the couple.

I would recommend this book, and series, to any looking for a Bad Boy to keep you company at night.