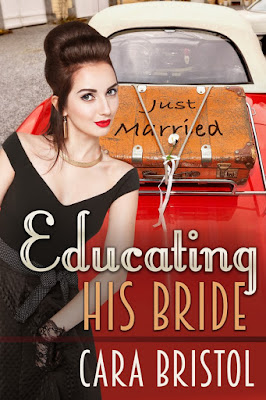 When she runs afoul of her professor husband, newlywed Margaret learns naughty college coeds get spanked.

It’s the 1950s. Never much interested in her studies, Margaret Atwater attends college hoping to graduate with an Mrs. degree instead of a bachelor’s. When she catches the eye of English Professor Henry Thurston, she’s thrilled to marry him, drop out of school, and begin a new life as a married woman and faculty wife. However, Henry is a kinky man who has much to teach his eager young bride—in, and out, of the bedroom. As Mrs. Henry Thurston, Margaret’s sexual education has just begun.

Educating His Bride was previously published in the short-lived anthology Correcting the Coeds. It is being released as a single title now.

Warning: this book contains explicit sexual content, spanking, exhibitionism, and the use of sex toys. And a funny, hot, historically accurate story.


“You forgot your lunch.” She glanced around. The office appeared the same as it had the day she’d gotten spanked with the ruler.


“I have a class to teach, so I’ll leave you two newlyweds alone.” Professor Abernathy winked.


His footsteps receded down the hall, and Henry planted a long, hard kiss on Margaret’s mouth. By the time he released her, she gasped for air.


“What did you bring me for lunch?” He peered into the corridor and slammed the door.


He twisted the key in the lock and scooted around her to the window. “On white bread?”


“Good. I like white bread. It’s so nice and fluffy. Almost like eating cotton candy.” He turned the wand and plunged the room into dusk. Enough light remained to see the sexual gleam in his eyes.


An answering heat pooled in her core. Yes, some things had changed since her last visit to this room. She might have gotten a C in his class, but she’d aced marital relations. He’d taught her much over the summer, lessons she’d embraced with alacrity.


Henry plopped into his chair and beckoned.


“What if somebody comes?”


“They won’t. It’s only the second week. Students don’t have reason to meet with me yet.” He chuckled. “They’re still searching for their classes.”


“I don’t know.” Did respectable married women do things like this?


He leaned back and spread his legs. His erection tented his trousers. “Do I need to come and get you, Mrs. Thurston?”


She loved being called that. Liquid lust pooled, but she played coy. “Maybe—”


Henry sprang up, dragged her to his desk, and upended her over his lap. The chair arms prevented him from pulling her completely atop his knees, but he was strong enough to hold her half on, half off. She braced her hands on the floor. Skirts flew over her head. A playful swat landed on her bottom.


Thwack. Thwack. “Henreee…” she giggled. “Ow!” she cried as he brought his hand down harder. There’d been many spankings over the summer. Only one had been for punishment after she’d gone shopping and had run late and hadn’t called. The rest had been sexy ones. There was something thrilling about her husband enforcing his will—and her surrendering to it.


“I wish you didn’t put on so many undergarments,” he groused as he spanked.


“I only wear the usual.” Panties, girdle, slip. Petticoats for poufiness, if the dress needed it.


“I mean around the house.”


That wasn’t as bad, but still. What if she had to answer the door? A respectable woman was always coiffed, starched, and properly clad. To not wear undergarments would be like not wearing…stockings!


She hoped he thought about it a long time. He flipped her off his lap into a heap between his legs, undid his trousers, and freed his cock from his shorts. Precum pearled on the smooth head.


Her brown feathered tilt hat had slipped from her head to her ear, despite being anchored with a pin. Henry threaded his fingers through her pageboy. The man was heck on a hairdo. Perhaps she should get one of those short, shaggy cuts like Italian actress Gina Lollobrigida had.


He exerted pressure to bring her face closer to his cock. “I used to think about you doing this when you were my student,” he said. “Suck me, Meggie.”


On the last day of their honeymoon, when her lady parts had become tender after so much unaccustomed activity, he’d offered her an alternative to please him: take his penis in her mouth. To say she’d been shocked was an understatement.


After much coaxing, he’d convinced her to kiss his cockhead. The smoothness of his glans had amazed her. After her tentative lick and hesitant suck, he’d emitted such a husky groan she’d been emboldened enough to shake off inhibitions.


Although she could never bring herself to utter the word “blow job,” not even in the privacy of their bedroom, performing it caused her woman parts to tingle. She relished the hunger in his eyes, his rumbles and growls. He could communicate his need quite forcefully, twisting her hair around his fist and thrusting so deep and fast into her mouth, he sometimes brought tears to her eyes, but his deep groans, his contorted expression made it worth it. She inspired desperation in him.


Margaret stroked his shaft and engulfed the head.


With her tongue, she traced the ridge. Sucking lightly at first, she increased the pull as she slid his cock in and out. He guided the pace, keeping a grip in her hair, rocking his hips. As his speed and force increased, signaling he approached orgasm, she hummed.


She’d discovered by accident Henry liked it when she hummed while she sucked on his cock. To merely hum seemed silly, so she found a song to fit the occasion, “Hold Me, Kiss Me, Thrill Me,” a hit record by Karen Chandler.


“Oh God.” His thighs tensed, and he thrust into her mouth so hard she saw stars, but she maintained contact and hummed louder.


The shaft of his penis pulsed, and he pumped his seed down her throat.

When the throbbing in his member subsided, his grip in her hair turned caressing, and she released his cock. Streaks of scarlet sunset—her preferred lipstick color—had transferred from her lips to his manhood. She wiped her mouth with the back of her hand. Thank goodness she was a married woman, or people would mistake her for a tramp—hair and hat askew, lipstick smudged right off, her dress wrinkled to high heaven.

A footfall sounded outside the door. Metal scraped on metal, and her blood froze in her veins at the realization a key was being inserted into the lock.

Margaret Atwater's college education goals was a Mrs Degree, what she didn't expect was to meet and fall in love with Professor Thurston. She may not have been interested in a bachelor's degree, but she's more than excited to learning her role as wife.

When Henry started seeing Margaret, he couldn't wait for the semester is over to marry her and start her lessons of how to be his wife. And those lessons are seductive, appealing, and oh so stimulating.

This book is a quick sensuous read about two people starting a life together based on a foundation love, hope, commitment, and a whole lot of titillating encounters. Margaret may stumble from time to time, but Henry will always stand by his wife and help her every step of way.

I really enjoyed this story and recommend it to anyone who is looking for a little something to help wind down after a long day.

When she’s not writing, she enjoys reading and traveling.