Laura Kaye has something hot and fun and new to share with you today – a scene from her upcoming book, Ride Hard, the first in her Raven Riders Motorcycle Club series about a new kind of MC with a protective mission. You might’ve first met the Ravens in the Hard Ink world, but this series stands on its own and is even sexier, edgier, and grittier! So read on for a taste and grab your copy of the first book in this sexy new series!

Get a Free bonus story from Laura’s Hearts in Darkness world for buying Ride Hard before April 30!

Brotherhood. Club. Family.
They live and ride by their own rules.
These are the Raven Riders…

Raven Riders Motorcycle Club President Dare Kenyon rides hard and values loyalty above all else. He’ll do anything to protect the brotherhood of bikers—the only family he’s got—as well as those who can’t defend themselves. So when mistrustful Haven Randall lands on the club’s doorstep scared that she’s being hunted, Dare takes her in, swears to keep her safe, and pushes to learn the secrets overshadowing her pretty smile.

Haven fled from years of abuse at the hands of her criminal father and is suspicious of any man’s promises, including those of the darkly sexy and overwhelmingly intense Ravens’ leader. But as the powerful attraction between them flares to life, Dare pushes her boundaries and tempts her to want things she never thought she could.

The past never dies without a fight, but Dare Kenyon’s never backed down before…

Dare jerked back from kissing Haven, his fingers rubbing roughly over his lips. “Fuck, I’m sorry.”

On instinct, Haven’s body pursued his, pinning his back to the railing. “Please don’t stop,” she said as her hands gripped his shoulders. She had the strongest urge to climb him, to wrap her legs around him, to grind against the hard bulge pressing electrically against her belly.

“Please,” she whispered, tilting her mouth toward his. “I liked it.”

Dare’s hand cupped the back of her head. “You’re killing me.”

“Dare,” she said, her body restless against his.

In a move that sent the world spinning, he flipped them around so that she was the one pinned against the railing. He pushed his legs between hers and leaned down over her, forcing her to arch her back, to yield, to open to him. “Tell me what you want from me. Say the words,” he said, his eyes absolutely on fire.

Her heart was a runaway train in her chest, frantic and picking up speed. The thought of giving voice to her desires was terrifying and thrilling and dizzying all at once.

“I want your mouth,” she said. The words sounded odder out loud than they had in her head, but they were more accurate than asking him to kiss her—because her mouth wasn’t the only place she wanted his.

“Jesus,” he rasped, his mouth coming down on hers once more.

The whimper she released was part relief, part anticipation. It had been so long since she’d kissed someone that she felt a little uncertain, but Dare’s intensity barely allowed her the capacity to worry about it. He was like a dark storm bearing down on her, relentless, magnetic, all-consuming.

Rough callouses from his hands scratched against her cheeks as he guided her. Hard breaths spilled over her lips, and the wet slide of his tongue tasted like whiskey and desire and man. Her hands found the soft length of his hair, and her breasts pushed against the hard plane of his chest.

Then her lips were freed as his mouth slid over her skin—exploring her cheek, her jaw, her ear, her neck. He hiked her up to sit on the wide railing, the move surprising a gasp out of her, especially as he crowded the space between her legs, pushing himself closer, bringing his erection against the place between her legs craving friction, hardness, so much more of him. Maybe even all of him.

One strong arm wrapped around her back and held her steady, while the other hand stroked her hair, her face, her breast. The soft groans and breathy grunts spilling out of him were delicious and thrilling, and bolstered her confidence that she wasn’t the only one losing herself in this moment, in these touches. She almost couldn’t believe this was happening, and part of her was certain she must be dreaming. Because Haven Randall didn’t have beautiful things in her life. At least, never before.

Don't forget you can grab Hard As Steel, a Hard Ink/Raven Riders Crossover Novella out now and pre-order Ride Rough, book 2 in the Raven Riders Series (out April 25, 2017)!

Laura is the New York Times and USA Today bestselling author of over twenty books in contemporary and paranormal romance and romantic suspense, including the Hard Ink and upcoming Raven Riders series.

Growing up, Laura’s large extended family believed in the supernatural, and family lore involving angels, ghosts, and evil-eye curses cemented in Laura a life-long fascination with storytelling and all things paranormal.

She lives in Maryland with her husband, two daughters, and cute-but-bad dog, and appreciates her view of the Chesapeake Bay every day. 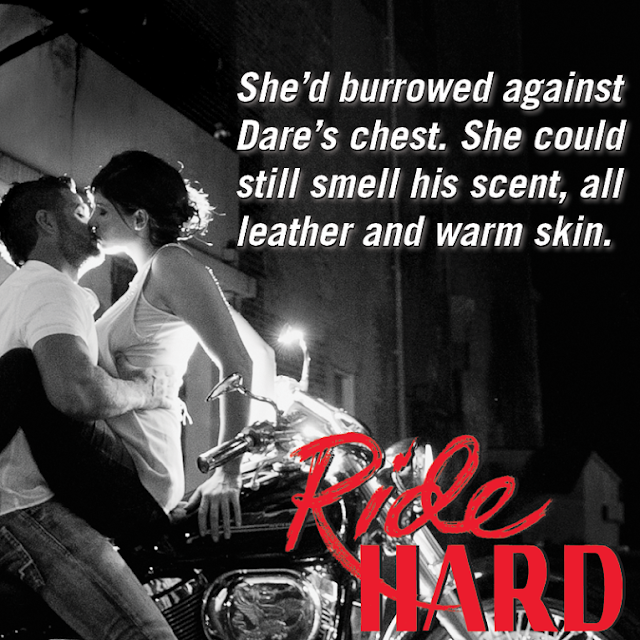 Check out all the stops on Laura Kaye’s Ride Hard – Review & Excerpt Tour!

April 21st
The Bookish & The Romantic
Lit. 4 Ladies
Melody May
Red Hot + Blue Reads
Reading in Pajamas
Always YA at Heart
The Book Boyfriend Addict
Vera is Reading
Write for Your Life