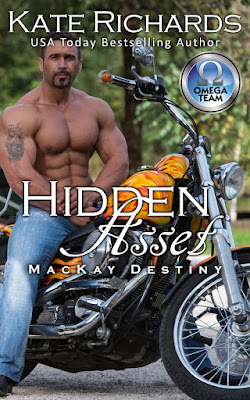 Jenna Gibson MacKay has been widowed for two years. A fact she’s just learned to accept. But the man at the door may change everything. What does a woman do when the guy she’s mourned turns out to be a little less dead than she thought? Does she take him back or send him down the road?

Gordon MacKay went dark to save his wife from a threat she never knew existed. The computer software engineer was working on a secret government project as well as helping out The Omega Team when Eastern European hackers forced him to fake his death. But the hackers are back and threatening everything he holds dear. If he and Scott and Caroline, other Omega Team operatives cannot stop them, the criminals may blow up a thousand wedding guests. But how can they be stopped when no one has seen them and nobody knows what they want? And now that he’s returned from the dead, can he convince his wife to trust him enough to let him stay?

“Jenna.” Gordon lurched forward as his wife crumpled in a heap on the floor, that stupid table he’d made for her landing next to her. “Jenna!” Damn, Grey was right. He should never have come back, especially not like this. Dropping to his knees at her side, he continued to call her name. He sat cross-legged and lifted her over his lap, stroking her satin cheek. She hadn’t changed much, except maybe lost a few pounds. More than a few. The pictures Grey’s contact had sent had not done justice to her weight loss. Damn. “My poor baby. What did I do to you?”

All his decisions had made sense until this moment when he held her pale, limp form. Now, nothing did. He’d left to protect her and returned for the same reason, but maybe it would have been better to take her somewhere far away to start with. How could he have asked her to live underground somewhere, far from her beloved inn and all her friends, and both of their families? Not to mention the threat had international roots and could follow them almost anywhere. No, the only way he’d been able to guarantee her safety was to be “dead.”

Even most of The Omega Team did not know that Timothy Baker who had worked from home doing computer research, thinly veiled hacking, and developing some new software for the past two years was Gordon MacKay. Everything in his HR file masked his real identity, his past, and his current location. They’d planned to keep it like that permanently, until the current crisis arose.

He had one chance to fix things, to make it right and eliminate the threat once again rearing its ugly head. This time, it menaced more than him. More than the two of them. This time, the ugliness hovered over everyone in Cedar Valley. The entire MacKay clan gathered for the weddings of two of Fire Chief Mac MacKay’s grandchildren, unaware of the danger swirling around them. His family and oldest friends’ lives were in danger

Kate Richards divides her time between Los Angeles and the High Sierras. She would gladly spend all her days in the mountains, but she’d miss the beach…and her very supportive husband’s commute would be three hundred miles. Wherever she is, she loves to explore all different kinds of relationships in her stories. She doesn’t believe one-size-fits-all, and whatever their it’s the love, the joy in one another, that counts. And her characters like to lead her on adventures she’d never have dreamed of on her own.