Book Tour & Giveaway ~ The Professor and The Bird by Roberta Franklin

Professor Nikos Angelopoulos is working with his Greek-Turkish team at a dig in Turkey when one day a young motorcyclist gets stranded: Sally from Ireland, fresh and charming and a bit flirty. Very soon the Professor finds out that, despite her temperament, she’s still very innocent and gullible, and he seems to develop fatherly feelings towards her, protecting her from the clear intentions of the young men at the camp.

Then she just happens to dig up a fragment of clay with an old Assyrian inscription in Hittite on it, and Nikos finds out that this inscription is the oldest one found so far in an Indo-European language. While celebrating their great find, Sally and Nikos discover their feelings for each other despite their age difference – but at the same time, an American millionaire turns up who wants to buy the clay fragment for his collection; and, although Nikos tells him it is a national treasure and not for sale, he won’t take no for an answer. He tries to convince Nikos to sell it to him, and when that plan fails he calls in his gunmen…

Amid their ever-growing passion for each other, Nikos and Sally now have got to face a dangerous and violent gang of artefact thieves together with their brave international team of archaeologists and workers. Who will win the showdown at Kanesh camp – and will this unusual relationship between a scientist of sixty and a young adventuress of not yet thirty stand the test of time? 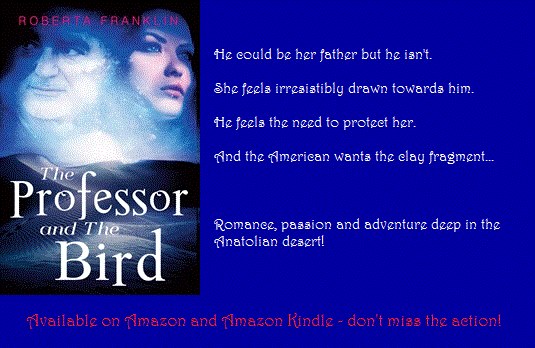 "True lovers of romance will fall to their knees over this sweet romance that proves love is just a number and when you meet your soul mate you do what ever you have to to be a part of their life." ~ Valerie Frentz, Amazon Reviewer

"Roberta Franklin put her heart and soul into this story and it showcases every single bit of what makes us human, the story that touches your soul and makes you believe in humanity and finding that one true love." ~ Igor Eliseev, Goodreads Reviewer 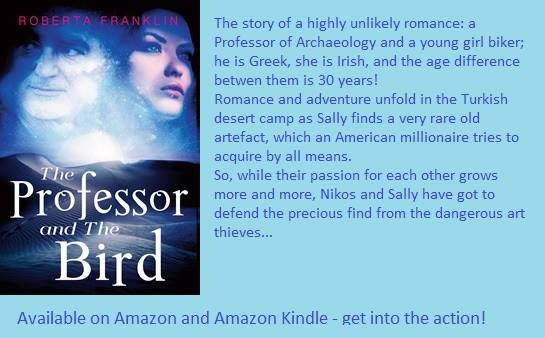 
Sally gets her first history lesson from Nikos

“Well, our work demands a lot of discipline,” the Professor explained while he sat down next to her with his cup of tea; “we start working at dawn, because the midday heat doesn’t allow us to work out in the open. I’m working in the treasure house, that’s what I call it” he added in a slightly embarrassed way, “with yesterday’s finds, which were plenty, and I’m waiting for the youths to tell me their opinion about my first evaluations; and maybe, at the trading place, they’ll find something really old sometime...” he said enthusiastically – and Sally asked, quite puzzled: “Well – I thought that all those things were old?”

“But of course, my dear child,” Professor Nikos smiled, and further explained to his young ‘pupil’ “Only there is a vast difference between a piece that is two thousand years old and one that is four thousand years old. Those finds can speak, if you understand what I mean. If one has learned their language, of course. The differences in the material, the style, the painting, the themes; right here on this spot there are items which give evidence about various quite different cultures, great empires that rose and fell or were destroyed, in the course of centuries. We know the more recent ones by heart, so to speak; anyone who has done three years of Ancient Greek or Latin at school can decipher the inscriptions; but the earlier cultures are still much of a mystery to us, and that is exactly what’s so suspenseful and fascinating about them. We don’t just assemble fragments of clay as if they were jigsaw puzzles; the whole history of mankind is like a giant jigsaw puzzle, and it takes a lot of patience and knowledge, and most of all curiosity, to try and assemble it. And there are still many pieces missing, and perhaps one or two of them are buried right here in the desert sand.”

The wise scientist’s speech had really made a great impression on Sally; and she admitted: “Gee, I’d never thought about it all like that... To me, history had always been just learning boring dates by heart.” 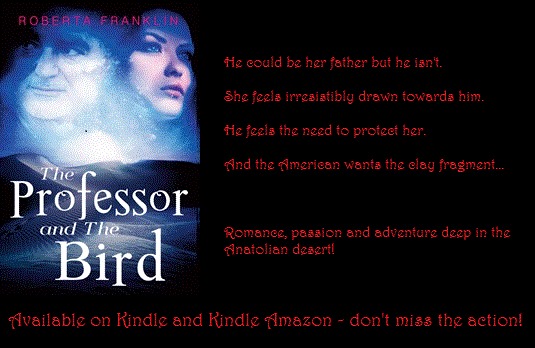 Turks love Westerns and other old Hollywood movies; they start acting as if they were in a Western during the robbery attempt, and they discuss Gary Cooper and Steve McQueen…

Nikos’ assistants Katerina and Giorgos develop their feelings for each other as well; in their case, the age difference is the other way round: Katerina is 14 years older than Giorgos!

Roberta Franklin, who was born in Germany in 1973 and studied History and English Literature in Munich, has been living in Greece since 1998. She has worked in various fields – as a journalist, as Social Hostess on a cruise ship, as an insurance agent – and during the past years she has been working as a freelance translator and a teacher of foreign languages. But her true passion has always been writing, and her favourite genre has always been romantic fiction.

To check the latest tour schedule, visit the The Professor and the Bird Book Page at Book Unleashed.