The Most Dangerous Duke in London
by Madeline Hunter
Genre: Historical Romance


Faint Of Heart Need Not Apply


Clara may be the woman Adam wants, but there’s one problem: she’s far more interested in publishing her women’s journal than getting married—especially to a man said to be dead-set on vengeance. Though, with her nose for a story, Clara wonders if his desire for justice is sincere—along with his incredibly unnerving intention to be her husband. If her weak-kneed response to his kiss is any indication, falling for Adam clearly comes with a cost. But who knew courting danger could be such exhilarating fun?

The Duke of Stratton was becoming a serious inconvenience. Part of the joy of being an older woman known to be uninterested in marriage was that people tended not to notice what she did. Clara had enjoyed that freedom even before her father’s death and now did so even more because she occupied Gifford House alone.

Stratton’s curiosity about her complicated that. Now here she was, sitting in his carriage when she should have been visiting the decorator she had hired to make some changes at her house on Bedford Square. Since no one knew about the house, she could hardly have the duke trailing her there.

She did not care for how he maneuvered her into spending this time with him. She resented that he had won a little contest.

“Do you prefer town? You spend a good deal of time here,” he said once they were seated across from each other and the coachman had opened the carriage to the air.

From anyone else she would think it small talk. From this man, she heard an intrusive question. “I like both town and the country. I spend time in both places. However, after all the months at Hickory Grange after my father’s funeral, it was time to see some friends here and dip one foot into society again.” Even as she said it, she worried that she gave him too much information.

“What do you do when you are not talking letters with them?”

“If I told you, I would no longer be intriguing and mysterious.”

It was a mistake to say that. She knew it as soon she said it. His dark eyes settled on her, amused and too confident that he saw more than she wanted. That gaze unsettled her. She found it stark, almost naked, in its demand for her attention. It implied intimacies of the spirit that she did not want to have or acknowledge.

She hurried to brush her own provocation aside. “You will find my interests very boring and feminine. I visit drapers and feast my eyes on the fabrics I cannot wear now. I stroll through warehouses and covet silk cords and laces.”

“Why not buy them now and store them until you can use them?”

“Because the anticipation is part of the fun. There is the danger it will build to a fever, however, and when I finally remove these black ensembles, I will be so reckless in my spending on a new wardrobe that Theo will have to bail me out of debt.”

She knew then that this man had learned about the size of her inheritance. Had Theo told him? Perhaps he had only heard gossip, but that would be enough.

It entered her mind that his only reason to pursue her with that stupid proposal was her fortune. As if the Duke of Stratton needed that! Although, really, who knew if he did or did not? She had not investigated him the way he had obviously investigated her, although she intended to.

Still, a man after her fortune. How predictable. How commonplace. How disappointing.

Once they were in the park she asked her own questions, while she encouraged their stroll to leave the main path so they might not be seen together.

“Would you truly not mind if the woman you proposed to had a lover before you? You keep implying as much.” She thought it a sophisticated and arch query and waited for him to avoid the meal once she set it squarely on a plate in front of him.

“You are what, twenty-four years in age? Only a fool would require innocence of a woman of that maturity.”

“What a liberal outlook you have.”

“I like to think so. I am only being a bit strict with you because I cannot risk my heir being the son of another man. I am sure you understand.”

She looked over at him, hoping to see that little smile or anything that indicated his continued references to his proposal were now a private joke. Regrettably, he appeared most serious. She decided that objecting would only dignify the ridiculous notion, so she ignored it.

Since he had coerced her into spending this time with him, he could not object to some frank questions about his life and his family, especially if he really believed they would marry. Althea was charged with investigating this man, but every bit added to the pile would help.

“Why did you leave?” she asked while they strolled through a little copse of budding trees.

“It was time to come back.”

His mood altered in a snap, as if the question opened a door to the dark humor she sensed in him. “My mother did not want to remain here after my father’s death, so I took her away and ensured she was settled in Paris.”

“She wanted to go home, you mean. That is understandable.”

“She had lived here for decades. This should have been her home, not a foreign land to escape. There were those who never welcomed her, however, or allowed her to make her place here.”

“If she is happy in France now, that is what matters, isn’t it?”

His sharp tone made her stop walking. “I am sorry if I misunderstood. I was careless in my response. Of course she could not be happy to leave her home of so many years.” She swallowed the question that begged to be asked. Why did she not want to remain here?

They stood under one of the trees, in the tangle of linear shadows its branches made.

“Do you really know so little about my life?” he asked. “Did you never hear the talk about my mother? You were out before she left. Before my father died.”

She did not have to search her memory long to remember some of the talk she had heard. Her grandmother’s voice always dripped with disdain when she mentioned Stratton’s French duchess. Grandmother was one of the people who suspected the worst of everything and everyone French during the war.

Others had sniffed when the Duchess of Stratton walked by at a ball, however. Clara had always assumed they envied her beauty and sought bad gossip out of spite. In truth she had not much cared what people said, however. The old war between her family and Stratton’s had left her unsympathetic to whatever slights were visited on his mother.

“I will admit, now that you speak of it, that I do know something of what she endured,” she admitted. “If that drove her away, it was not fair.”

To her surprise he took her hand and raised it to a kiss. “That alone did not do it. However, it is good of you to see how unfair it was.”

That kiss on her hand, brief though it was, created a bridge of intimacy. She felt that kiss all the way up her arm and down her body. His gaze captured hers before he kissed her hand yet again, slowly.

She did not pull her hand away. She did not avert her eyes, as she most definitely should. Instead she stared while that kiss and those dark eyes enlivened her whole body.

He drew her closer, closer, until she either had to step toward him or fall. She did a bit of both, stumbling awkwardly, and found herself in his arms.

He was going to kiss her. She was sure of it. That must not happen. Instead of pushing away, however, she could not move. His gaze paralyzed her and incited an unseemly excitement.

His arms embraced her. He looked down. Dazed, she closed her eyes and waited.

When nothing happened, she opened her eyes. Instantly the euphoria lifted, and she felt a fool. She tried to extricate herself from his embrace, but he did not allow it.

“Of course not. You are the last man I want kissing me, I assure you.” She refused to look at him and continued trying to pull away.

“That is not true. Let us be honest with each other in this if nothing else.” His head dipped and his lips hovered over hers.

Her breath caught. Heavens, but he was beautiful. And exciting. Even that darkness seduced. Thrills kept spiraling through her, begging to have excuses to become something more powerful.

“Part of the fun is the anticipation,” he said quietly, imprisoning her with his gaze. “Although there is always the danger of it building to a fever.” His lips brushed hers, ever so faintly, but enough to create a starburst of sensation.

It was a terrible tease. A provocative promise. 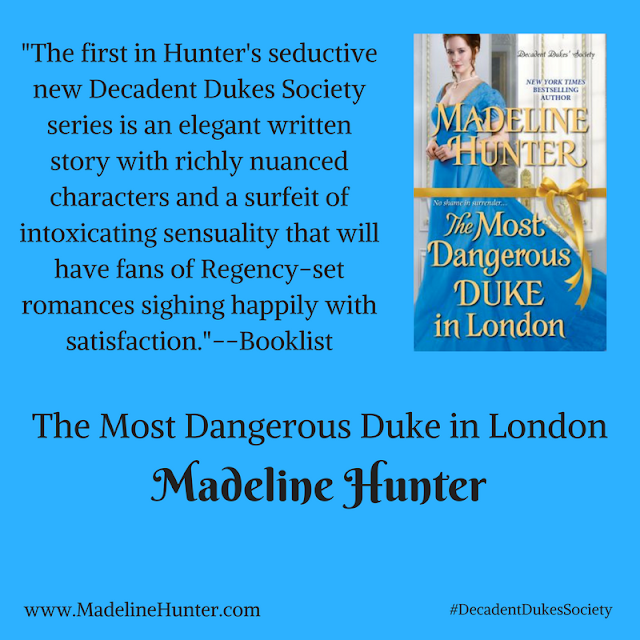 Madeline Hunter is a New York Times bestselling author with more than six million copies of her books in print. She has twenty-nine nationally bestselling historical romances in print, including most recently, The Wicked Duke, Tall, Dark, and Wicked, His Wicked Reputation, and The Accidental Duchess. A member of RWA’s Honor Roll, she has won the RITA Award twice and been a finalist seven times. Her books have appeared on the bestseller lists of the New York Times, USA Today, and Publishers Weekly, and have been translated into thirteen languages. She has a PhD in art history, which she has taught at the university level. Madeline also writes the Romance Unlaced column for USAToday.com’s Happy Ever After site. 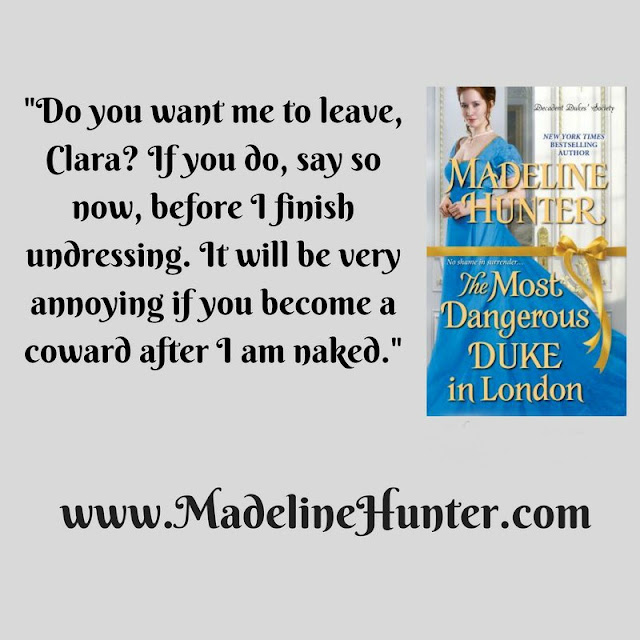 Follow the tour Here for exclusive excerpts and a giveaway!