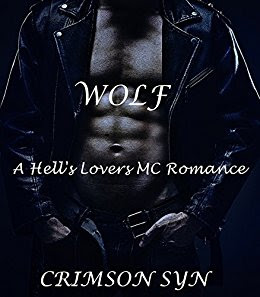 Scarlett Chase is every man’s wet dream.
As soon as I laid eyes on her, I knew she’d be mine.
That is, until I found out she was untouchable.
One kiss, one forbidden touch, will have me out on the streets and stripped of who I am.
Yet I want her. I need her. And I’m done following all these damn rules.

Wolf Stone is my obsession.
Ever since he pulled over on that empty road, I’ve been tormented by the man.
His possessive words and heated looks have me tightly wound.
One touch, and he lights me on fire.
But I want more.
I not only want him in my bed, I want to keep him for myself.
But he won’t budge, and now it’s up to me to entice his sleeping wolf. 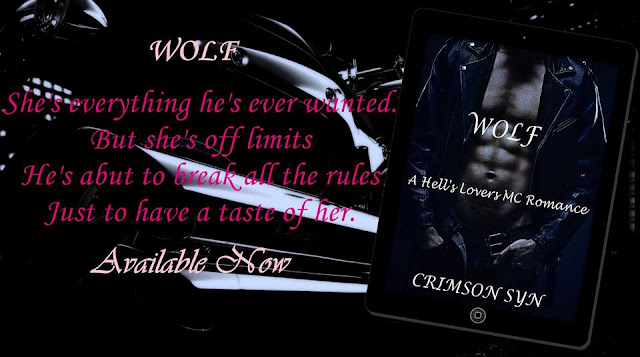 “Wolf.” I breathed, dragging my hands along his tussled hair.

I felt the hot slickness of his tongue lick me from the base of my shoulder up along the curve of my neck. He stopped briefly before nipping my earlobe and I nearly came, right then and there.

“You taste so goddamn good.” He whispered.

My words seemed to snap him out of his trance and he stepped away from me. I glided down the wall and a feeling of emptiness surrounded me as he moved away.

My hands reached for him, but he turned away. I could tell his breathing was labored, and he was just as, or even more affected by this, than I was. I reached out and touched his back and I suddenly found myself pressed once more against the wall. My body arched like a cat in heat, trying to bring every inch of him against me. The movement was futile as he gripped me by the shoulders and half shook me awake from my lust filled moment.

“Stop it. Stop, Scarlett. I won’t be able to do this if you don’t stop.” He pressed his forehead against mine and ran his hands down my arms, gripping my hips. His mouth said one thing, but his hands wouldn’t stop touching me. “Stop. Please.”

My body stilled at his request, but it remained thrumming alongside his.

He dragged his rough jaw against my cheek and breathed in. “I can’t. I just can’t.” He squeezed his eyes shut, almost as if it hurt. He waited a few minutes, his body vibrated against mine, and his hands continued to hold me. “I won’t have you wandering down here. You need to leave.”

He gripped my waist tightly. “I want you to leave, Scarlett. You don’t belong here!”

I rubbed my hands across the muscles of his chest and his breath hitched. “I don’t want to leave. I want to stay here. With you.”

He growled and leaned his body into mine. “Me too, gorgeous. Oh God, me too.”

He practically pried himself away from me and met my eyes. “But I can’t. I can’t do this to you. I’m not worth it, Scarlett. None of this is.”

“You can’t do what?” I shook my head as he stepped away, but this time I stayed with him, gripping onto his jacket. “Don’t! Don’t pull away. I want this. I want you.”

He looked down at me and smiled sadly. “I want you too.”

He didn’t elaborate on it, he just grabbed my hand and dragged me upstairs. He waited until I grabbed my purse and then he led me out to my car.

Closing the door, he leaned in. “Will you be here tomorrow?”

His question sounded more like a plea and my heart softened even more for this man.

“Yes.” I whispered, and leaned over pressing my lips to his cheek. I watched as he closed his eyes and then stepped away.

Her Hell's Lovers MC series is her first attempt at a bad boy biker series. If you're looking for sweet and innocent, you'll find it, but not in that wholesome way you're used to. No. Miss Syn delivers sex at its dirtiest, and the more innocent you are, the more her alpha males will attempt to defile you.

Miss Syn is passionate about her family, her friends and her writing. She cherishes her moments where she gets to travel, and her inspiration comes from all those wicked fantasies many of you ladies love to daydream about. She writes her alpha males tough, rough, and exciting, and she expects for her female leads to be independent, bright women with lots of sexy curves that can handle anything that gets thrown at them. 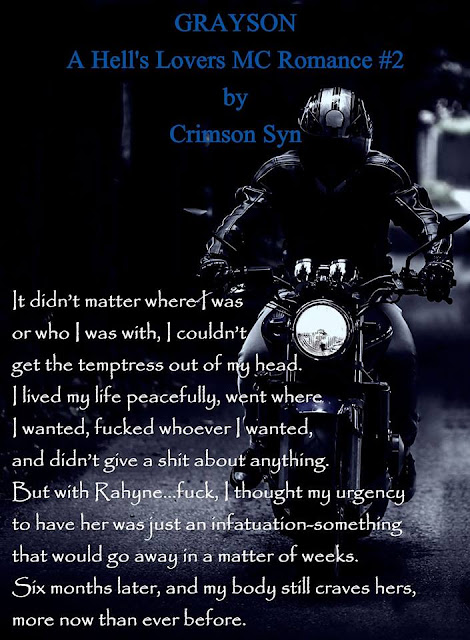