Harlie Steele is building a new life for herself and her two-year-old daughter, away from her controlling ex-husband. When she falls in love with rock legend Lex Callatori, their whirlwind romance pulls her away from her small-town home and sweeps her into his tempestuous world of paparazzi, tabloids, and bodyguards. She wonders why he’d fall so hard for her when he could have his pick of buxom blonde groupies, and whether the tabloid reports of his violent temper, womanizing ways, and drug addiction could be true. She opens her heart to Lex while emotional scars from years of domestic violence begin to fade.

But trouble looms near, casting a sinister shadow on Harlie and Lex as their passion grows stronger. Driven by jealousy, someone is hell-bent on ending their relationship, one way or the other. Harlie literally fought to stay alive when she left her abusive ex and has no intention of being anyone's victim ever again, but when an obsessed stalker raises the stakes, her strong spirit and will to survive are put to the test.

A wild roar sounded as Lex Callatori sauntered back onstage singing “Secrets.” He traipsed his slender five-foot, ten-inch frame across the stage, shaking his ass with each step. Harlie was close enough to see every detail of his handsome visage: his hypnotic brown eyes, his full sensual lips, high Italian cheekbones, and layered dark brown hair that seemed to massage his shoulders. Flawless skin and lascivious moves helped Lex look much younger than his years.

Animated by the music, Harlie swayed to the next song. Like a snake hypnotized by the charmer’s flute, she danced to please only herself, eyes dreamfully shut as Lex belted out the rest of “Nefarious.”

“My love is a drug I’ll use to seal your fate,
Flowing through your veins to intoxicate.
My perverted scheme will feed on your soul.
Addicted to me, you crave to feel whole.
You come crawling to me, begging for a fix.
Worship me now, kiss this crucifix.
Now’s your last chance to run and hide.
In just a minute I’ll be coming inside.
Nefarious, nefarious.
Done warned you once, I’m bad to the core.
I’ll do what I want and leave you screaming for more.
Nefarious, nefarious.”

Harlie’s heart almost exploded when she opened her eyes. For one brief moment, she thought Lex Callatori grinned at her over his scarf-enshrouded microphone. No freakin’ way, she told herself, it’s just my imagination playing a cruel trick on me. The lights were so bright he probably couldn’t see past the edge of the stage. Even if he could, she didn’t see why he’d look her way, not when he could ogle the three bimbos to the left who kept flashing their tits at the band. Dylan moved forward with his guitar when the blonde one threw her bra onstage.

Lex announced that the next number, “Last Dance”, would be the final song of the night. Harlie couldn’t believe the concert had gone by so quickly. She could have stood there in her uncomfortable shoes all night long, listening to FireStorm, watching Lex dominate the stage until the sun came up. She tried to burn each movement he made and every note he sang into her memory so she could replay it in her mind forever.

While Dylan soloed through the first chorus, Callatori motioned for one of the security people to approach the edge of the stage. The singer pointed in Harlie’s direction and whispered something in the burly bodyguard’s ear. Harlie turned around to see what he was pointing at, but didn’t spot anything out of the ordinary.

The next instant, the big guy walked straight to where she stood, and, after tinkering with a key for a few seconds, he cracked open a hinged gate in the barrier. He guided Harlie through and motioned for two men sporting blue security shirts to stop an influx of FireStorm devotees from following.

In a state of total disbelief, Harlie walked toward the stage. The security guy who led the way placed a stepladder in front of her. Lex, now directly above her, belted out the second verse. Someone guided her up the makeshift stairway where Lex stood smiling seductively, his hand extended.

Stunned, she took his hand, her eyes locking with his as the beautiful love song poured from his lips. God, don’t let me wake up yet, thought Harlie, because I know I’m dreaming.

The song ended with Lex still holding her trembling hand. He gave her a quick peck on the lips when the last chord rang from Dylan’s guitar. The frenzied crowd cheered as the band, Harlie in tow, headed to the rear of the stage.

During their exit, the singer turned to her and asked, “So, what’s your name?”

“I’m ...” Harlie tried to swallow the big lump clogging her throat. This is only a dream, she reminded herself, so I might as well play it right. Looking into his dark chocolate irises with an air of coolness, she heard words pour from her own nervous lips, “My name is Harlie Steele.”

“I’m Lex Callatori,” he said, as if she hadn’t known, leading her down the rear stage steps, “and it’s my pleasure to make your acquaintance.” 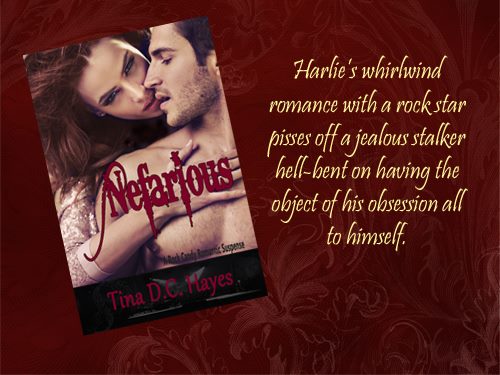 Tina DC Hayes is a bestselling author who writes sassy Southern suspense. The busy mother of four lives down a little country road in western Kentucky with her family, which includes a few pampered pooches and parrots. She likes to read, hang out with friends and family, watch movies, play the guitar, and indulges her inner Foodie in the kitchen and by eating at cool restaurants. Currently up to her elbows in diapers, she's an expert at 4 a.m. bottle feedings and Patty Cake.

The giveaway closes at midnight EST on June 16 and is open to entrants worldwide.
Good luck!