Release Blitz & Giveaway ~ Meet Me Under The Stars by KD Proctor 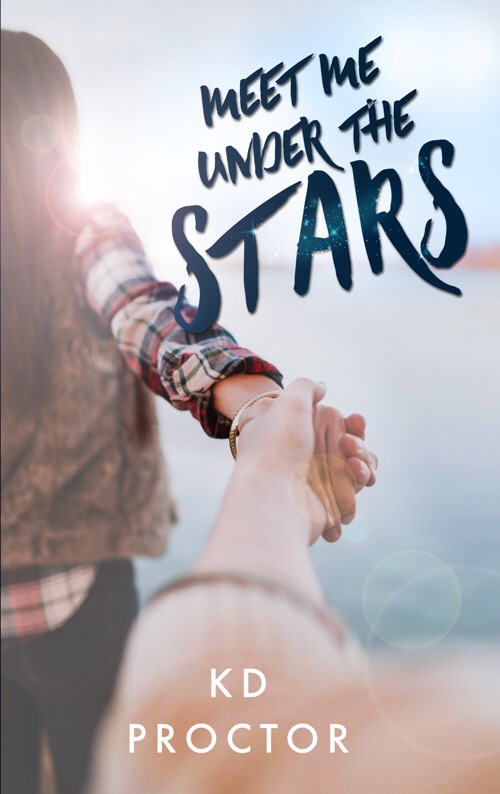 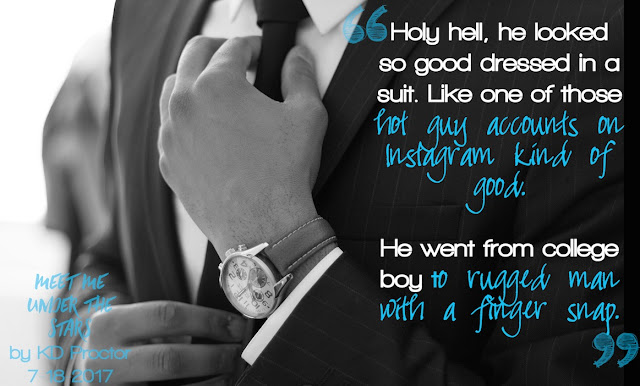 When ratings for her popular DIY show start to circle the drain after the sudden death of her sister, Charlotte “Charlie” Conti has only one mission—to plan a comeback. But her sister had other plans. As part of the will, Charlie must work with *him*  to create a memorial scholarship in her sister’s memory. The same *him*  Charlie fell in love with three years ago while working at a summer camp.

The same *him* she dumped to protect his heart.

Sexy British player, Nate Walsh, has sixty days to find a new job or he’ll be deported back to England where he’s no longer welcome. He doesn’t have time to work on a memorial scholarship with *her*. The same *her*  who shattered his heart without explanation or warning.

The same *her*  he’s never gotten over.

Unable to agree on a benefactor for the scholarship, Nate and Charlie challenge each other to a winner-takes-all competition. They both know the only way to win is to turn up the heat and tease one another with the one thing they both want: each other. But as sparks fly, their true feelings resurface. Nate and Charlie must decide if their love is worth the effort or if they'll allow their disastrous past mistakes to destroy their chance at forever. 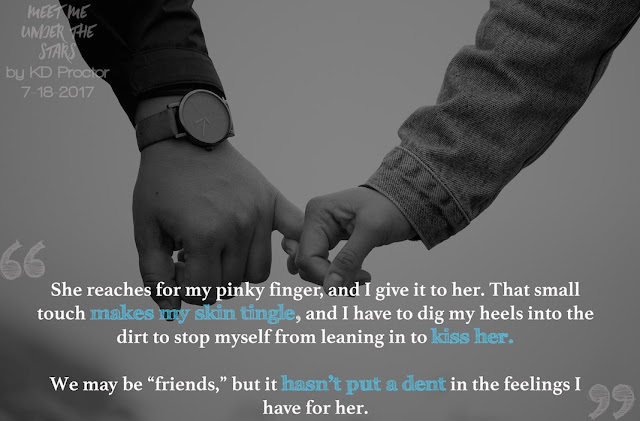 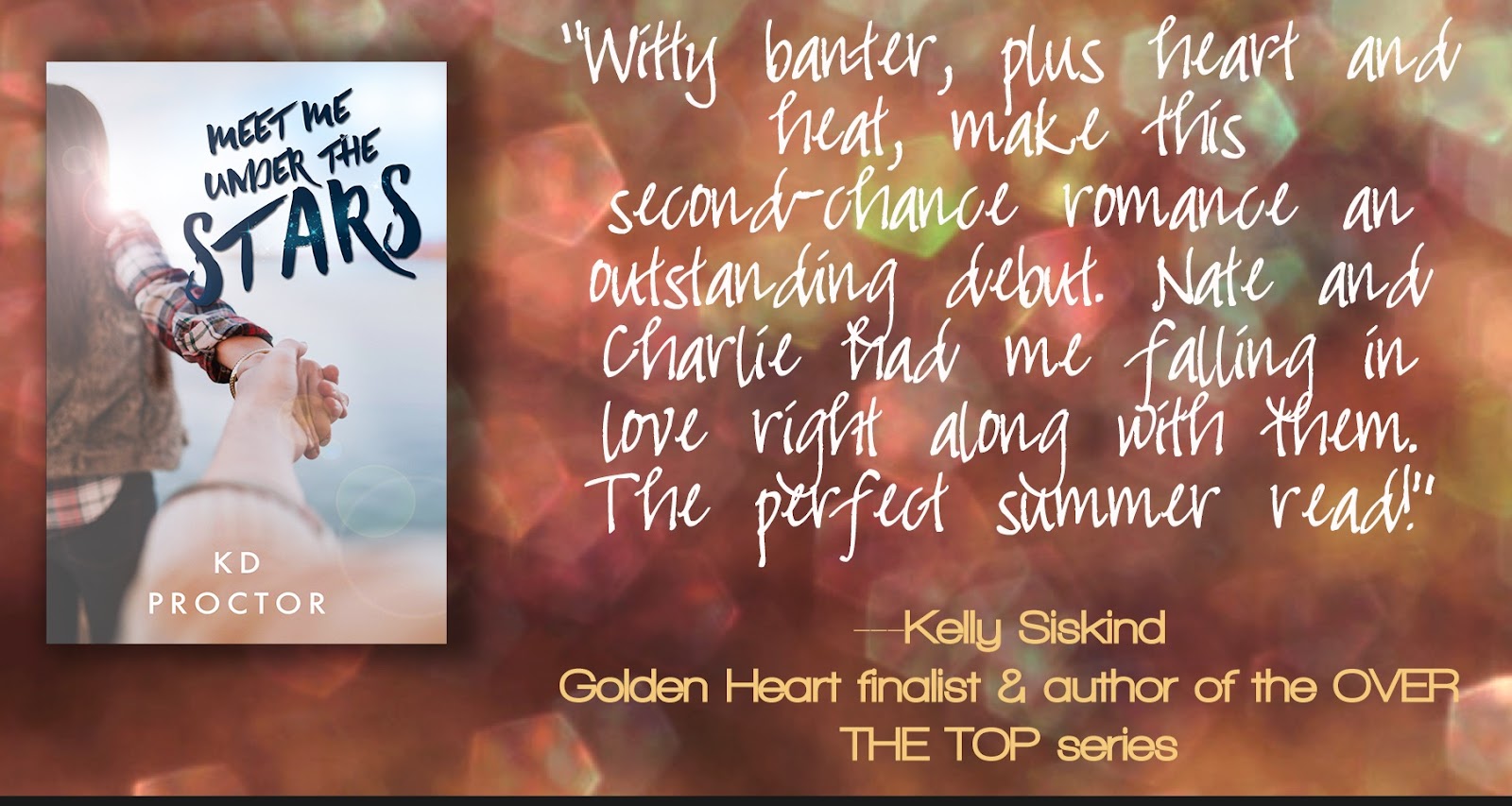 An Interview with KD Proctor

Thank you KD for stopping by today and sharing your release Meet Me Under The Stars! How about we get started...


Do you work to an outline or plot, or do you prefer just see where an idea takes you?

I am a plotter. I "pantsed" one novel, and it was a nightmare. My outlines are very detailed, and when it comes to writing, it's more like I'm filling in the blanks because I've plotted so much ahead of time.  I also do a really detailed character inventory (even using the 16 Characteristics website to help me really understand the flaws of my character).

What was your hardest scene to write?

When I first started out with this book, I thought for sure the sexy times would be hard to write! Ha ha ha! Surprisingly, they weren't. What was hard for me to write wasn't a scene as much as a concept: the idea of friendships made at a summer camp staying strong over the years. When CPs and betas read the early drafts, almost every single one came back at me saying, "This isn't realistic." To them, the idea of being close friends after ten weeks--much less two people falling in love--felt fake. At first, I scoffed at their feedback. But then I realized that to me--a former camp counselor and full-time camp staff member who has lived, breathed, and absorbed summer camp for years--it wasn't unusual at all. It felt unrealistic to them because they were looking at it from their own life experiences. If you worked in a traditional office setting, you might be friends with a co-worker, but keeping in touch with them after one of you leaves the office for another job doesn't always happen. At camp though, it's not unrealistic years or decades later to reach out to a camp friend, say you're in town, and ask if they want to catch up over coffee or dinner. And like no time has passed, you fall right back into old routines. The best way that I can describe it: it's like friendships formed in the military.

Which writers inspire you?

So many writers inspire me that we honestly don't have enough server space on your blog to list them all (and I'm also afraid I'd miss someone!). In general terms, I'm in awe of writers who persist, year after year, plugging away at the manuscripts that speak to their heart. I love writers who encourage others, even when things may not be going so well for them personally or otherwise. Writers who push the "rules" of writing and create beautiful stories and worlds. or #ownvoices authors who drop truth bombs daily that I'm always writing down so I don't forget. I'm inspired daily by writers--published and unpublished.

I would want to write the book, He's Just Not That Into You. This is a self-help/relationship book based on an episode from Sex and the City. In that episode, Miranda wants to see a guy again, but he's ghosted her. The girls try to console her with all the usual excuses ("he's busy" or "it hasn't been three days since your date"...that kind of stuff). Berger, the guy who is dating Carrie, is with them as they're processing this, and when they ask his opinion, he's like, "He's just not that into you." The girls gasp, but Miranda is spellbound by this new theory. He explains it to her, and right there she's a changed woman, no longer second-guessing or trying to decode all the bullshit games guys play.

One of the writers on the show took that line and made it into a great self-help book. I read that book back when I was dating, and it was a lifesaver. Seriously! Where was this when I was in college with all the broken hearts and nights spent eating my feelings over a pint of Ben & Jerry's? Not only that, but can you imagine having all of that research at your fingertips for writing a romance novel!?! Gimme!

What advice would you give to aspiring writers?

Can we be honest? Like really, honest? Publishing is not for the faint of heart. What they say is true. You need a thick skin and the patience of a saint.

True story: Colleen Hoover and I had a very kind email exchange very early on in my writing career. She shared a laundry list of writing advice, and this has always stuck with me: Publishing is a really hard industry to break into, and the odds of being a best seller are slim. However, that doesn’t mean you shouldn’t do it. She encouraged me to set my end goal to be as simple as possible: write a book that I love and publish it. That way, if any of the cool stuff happens (like movie deals and world publishing rights), then it’s an added bonus. If none of that happens, it’s okay because you still met your goal of writing a book and publishing it.

Yes. The advice we've all heard before about not giving up and persisting is 100% valid. But we need to be real about what to expect.

What do you like to do when you're not writing?

I love photography, cross-stitching, embroidery, and, of course, reading! I can also get sucked into a series on Netflix or Hulu and binge watch like my life depends on it.

Thank you again KD. It was a pleasure getting to know you!! 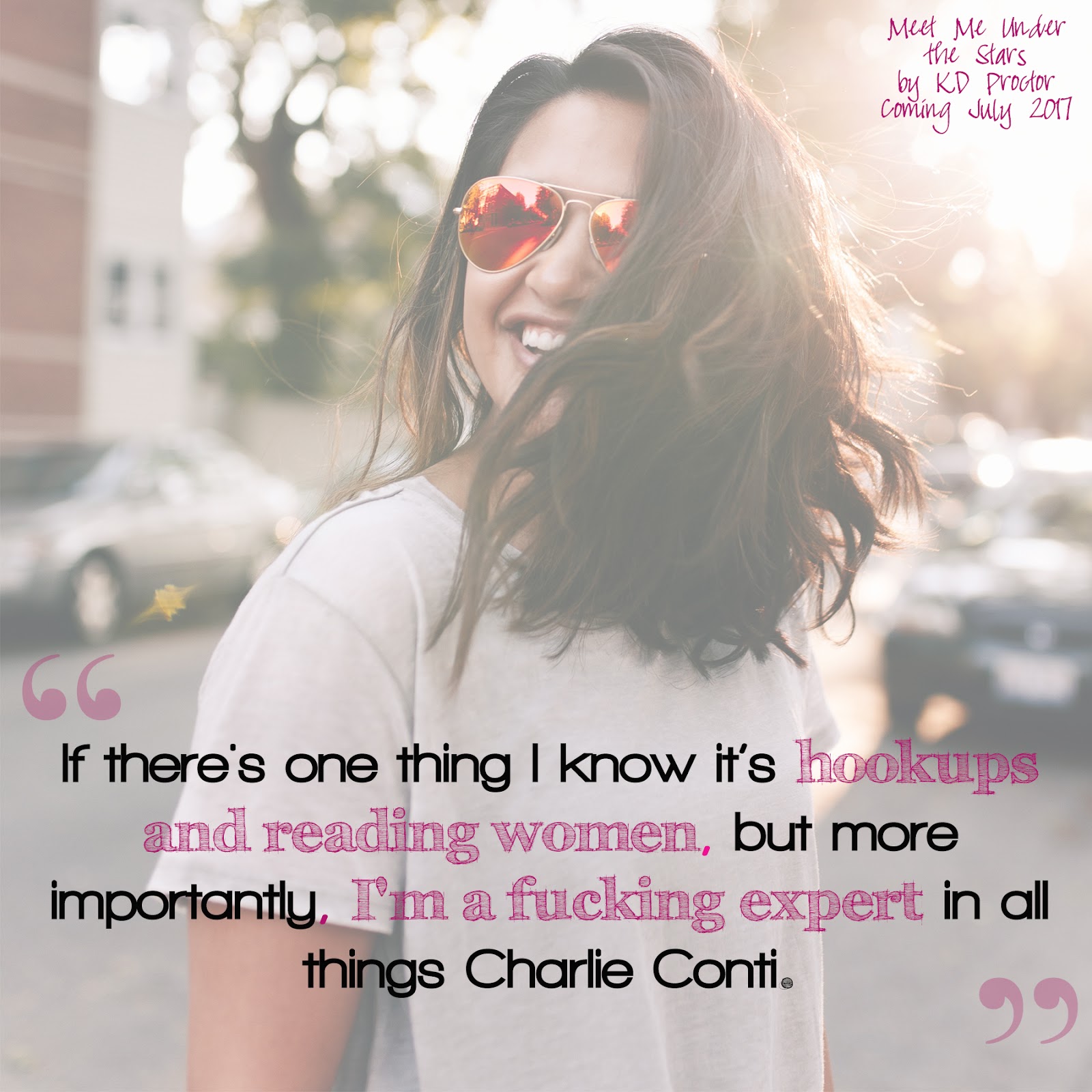 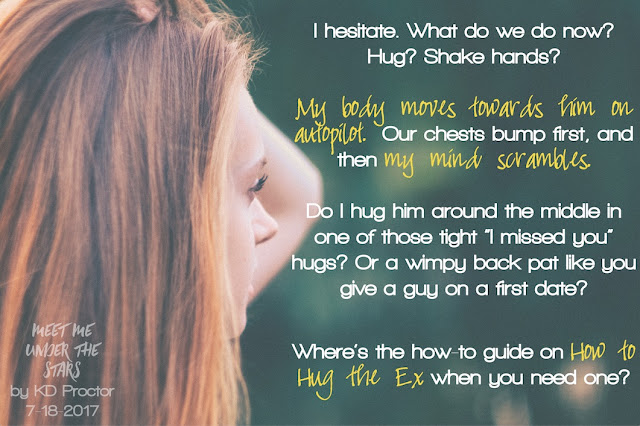 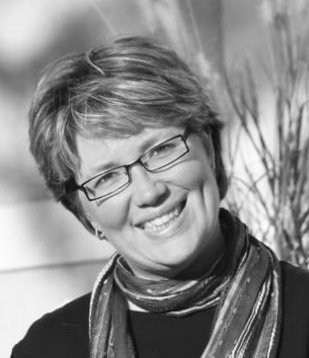 KD Proctor loved college so much that when it came time to graduate, she didn’t want to leave.  Trading in her textbooks for student handbooks and policy manuals, she began a career in College Student Personnel and she fulfilled her wish to stay on a college campus forever.  She always joked that one day she’d write a book about college students, never expecting that to come true!

KD lives in West Central, Minnesota with her husband and fur-kids.  She likes to write fun twists on the usual tropes that we all love. Her characters are smart, funny, and always swoony.  And yes. They always get their happily ever after.

Before being accepted for publication, Meet Me Under The Stars (formerly titled If You're Ever In Town) was the 2016 YARWA winner for the New Adult category. 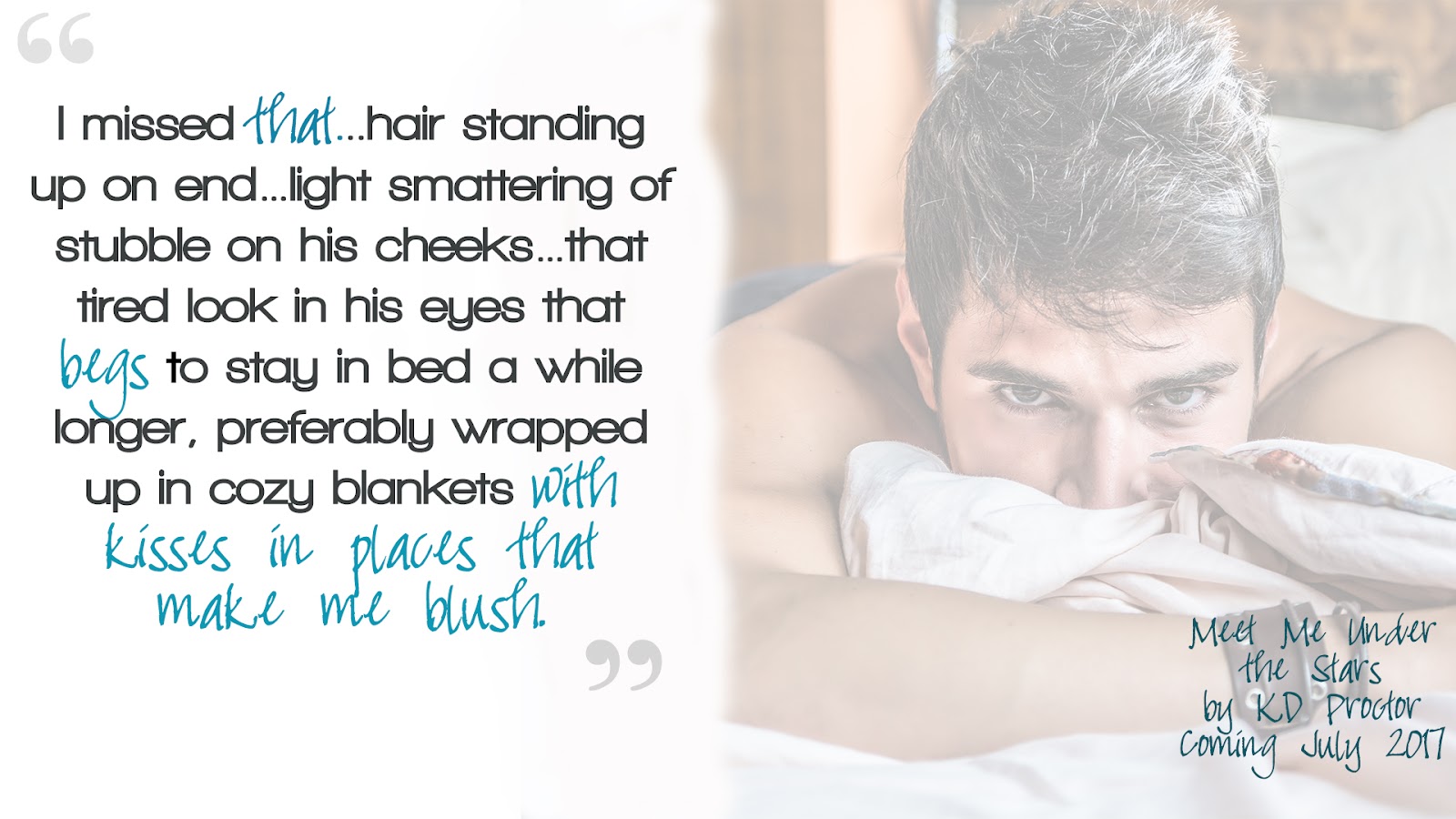 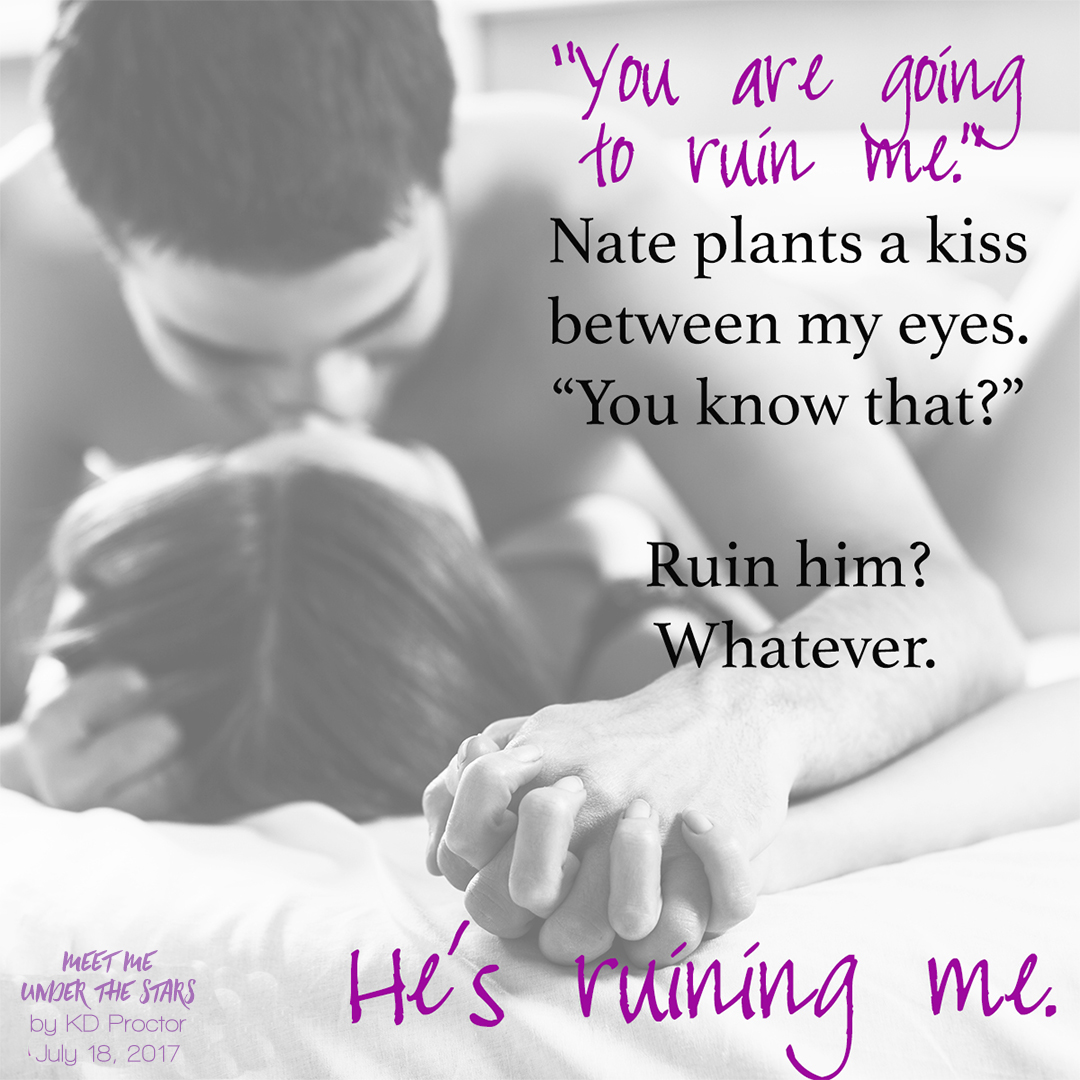