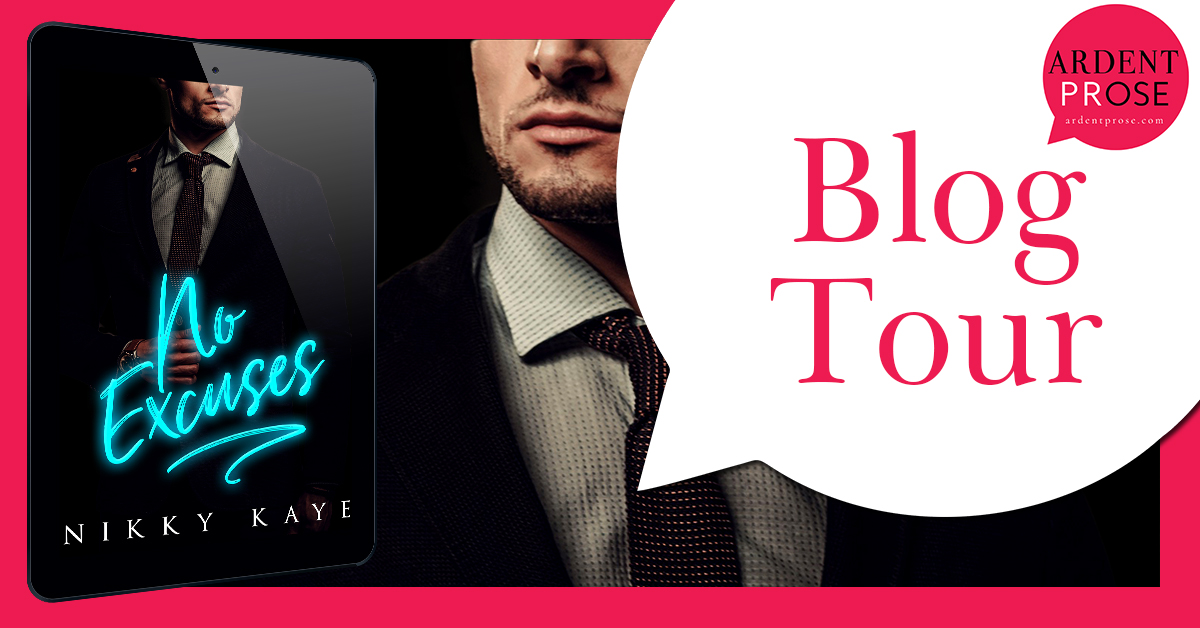 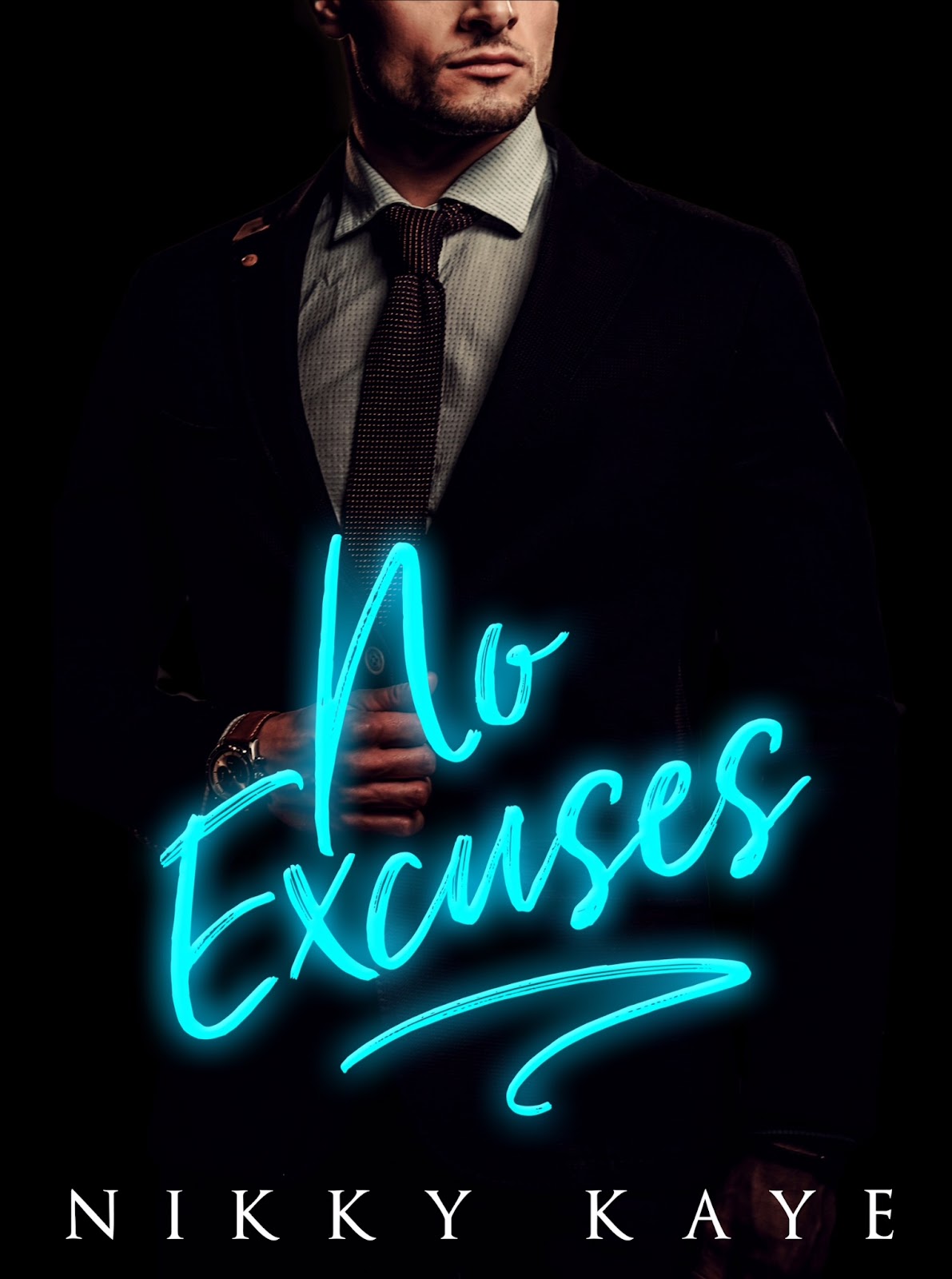 1 Pack the right clothes. Especially extra underwear.
2 Don’t try to school your insanely hot boss on acceptable trust exercises.
3 Be prepared for the extracurricular ropes course.
4 Make sure there is a safety net when you fall, because you will fall hard

Gage doesn’t appreciate how hard it is to be his right hand woman—especially when I’m spending so much time with my own right hand, fantasizing about him. My demanding, control freak boss is testing all my limits, and I don’t know how long I can stay professional.

No Excuses is a hot, full-length contemporary romance, featuring blindfolds, rope play, food fights, and sexy architectural features like wainscoting. As in all Nikky Kaye books, cheating is not allowed, but some funny stuff and a HEA are non-negotiable. 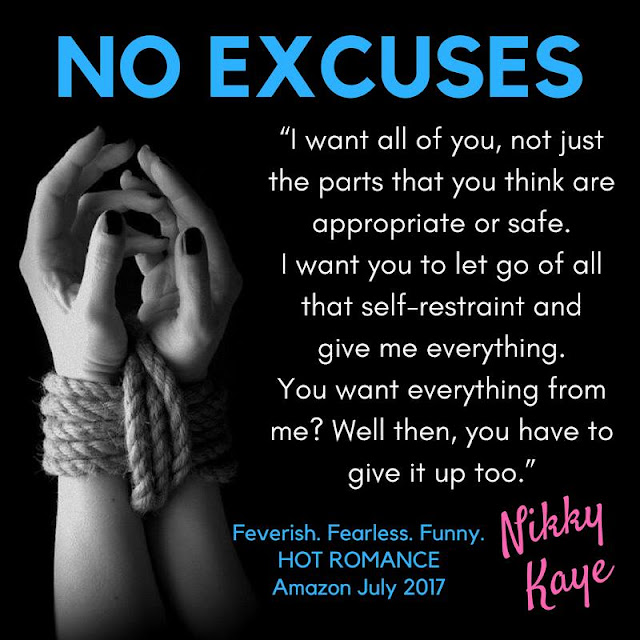 When he took my hand, he pressed his open mouth first to my palm, then the pulse point on my wrist. I was sure it was fluttering like a freaking butterfly.

“I want to show you my playroom. It’s important to me.”

He led me down the hallway in his little dollhouse. Another time I would have run my hand along the banister at the top of the stairs, its patina velvety with age. Or I would have probably noticed the vintage glass doorknobs at each room. But all I could see was the bright white of his shirt like a truce flag as I trailed behind him.

He stopped us in front of a door at the back of the house, and I hesitated. Actually, we both did. Gage rubbed the back of his neck. The direct, motivated, successful billionaire was nervous—and that made my knees close to knocking together.

“This is probably the most… personal, private part of me,” he explained haltingly, his gaze penetrating me. “Someday I would like very much for you to join me in here.”

Do not hyperventilate, I told myself. You are a mature, sexually active adult with an open mind—and past rope burns to prove it. You just role-played in the office, for god’s sakes. Do not embarrass yourself.

Instinctively, I squeezed my eyes shut as he reached for the knob, and the door creaked open. When I opened my eyes to slits, it was first to look up at the exultant look on Gage’s face. Then I faced the playroom. I hadn’t realized I’d been holding my breath until it whooshed out of me.

“How can you have Pac-Man but not Ms. Pac-Man?” I pointed to the array of arcade games lined up against the far wall. “That was clearly the better game!”

“I beg to differ.” With his arms crossed over his chest like that and his jaw looking like it had been set in concrete, there would be no persuading him.

At least he had Mortal Kombat and… was that a Dance Dance Revolution platform? It was covered in Japanese writing.

“Please tell me you have an Xbox.”

“Baby, I have everything.” He pointed to the giant beanbag and large—but not huge—television in one corner. Gage was almost glowing as brightly as the screens on the old consoles. Their sound had been muted, but the lights blinked in the background like dozens of little disco lights.

I wanted to laugh at myself for my idiotic fear. Whips and chains? Come on. I began giggling as I imagined myself bent over and tied to a bubble hockey table.

Boys and their toys. It gave a whole new meaning to “joystick.” At that ridiculous thought I bent over a little, my hands on my thighs, trying to cork up the laughter.

He stiffened, probably unused to being seen as a source of comedy. Well, it was past time to change that. Finally I managed to control my giggle fit, which was probably half due to relief.

His annoyance came out in a strange sound from deep in his throat. When I flung my arms around his waist, he felt as though made of steel. I wanted to melt him down in a fiery forge and bend him into sinuous shapes. Cradling his carved jaw in my hands, I pulled him down for a tender, apologetic kiss.

“I would love to play with you, Gage. But you should know that I take no prisoners in Mario Kart.”

He sighed against my lips, multi-tasking while devouring me. “That is one… of… the sexiest… things… I’ve ever… heard… come out… of your mouth.” 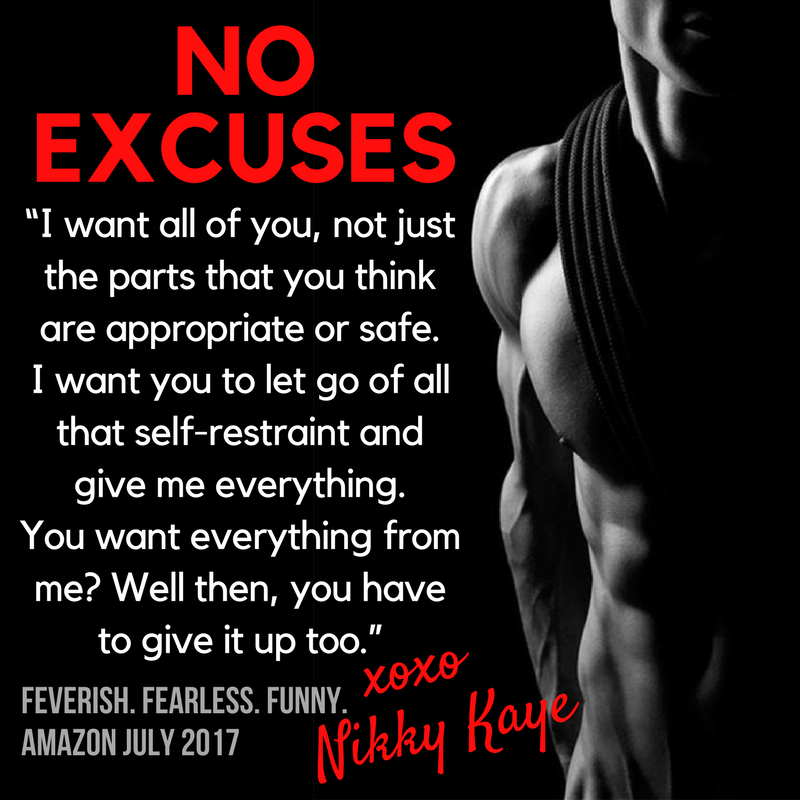 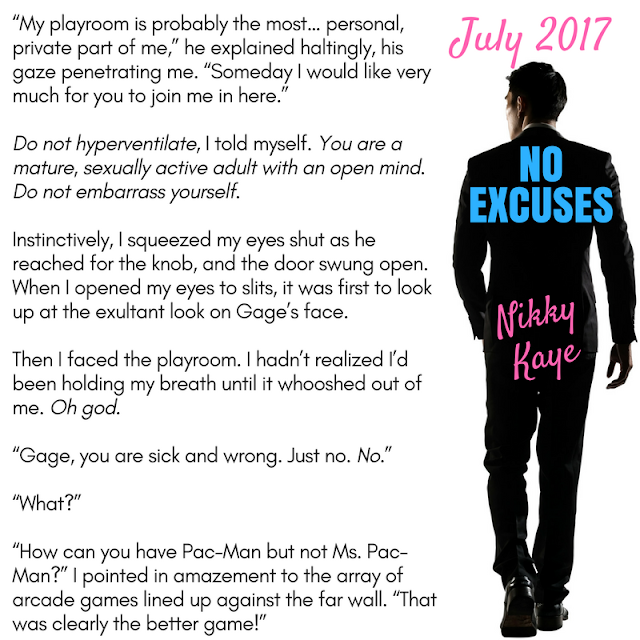