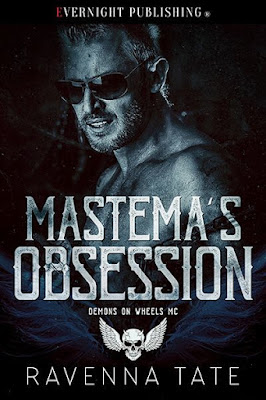 Kayla Romanowski is having trouble adjusting to life as a dancer in Scotty’s Place, the posh strip club that the Demons on Wheels MC owns and operates. She hadn’t really expected to be assigned domestic duties, even though it was a clear expectation when she was hired As a result, her days involve resentment and dubious glances from the other women.

All that changes when she finally allows Mastema, the club’s Secretary, into her bed. Kayla is gun shy from her past experience at other clubs, but there’s something about Mastema she finds irresistible and trustworthy. He also helps her put everything in perspective, including her extra duties and their importance to the running of the club.

As she and Mastema grow closer, she opens up about her life, and discovers he’s harboring a secret of his own. Can they let go of their pasts and embrace their future together? 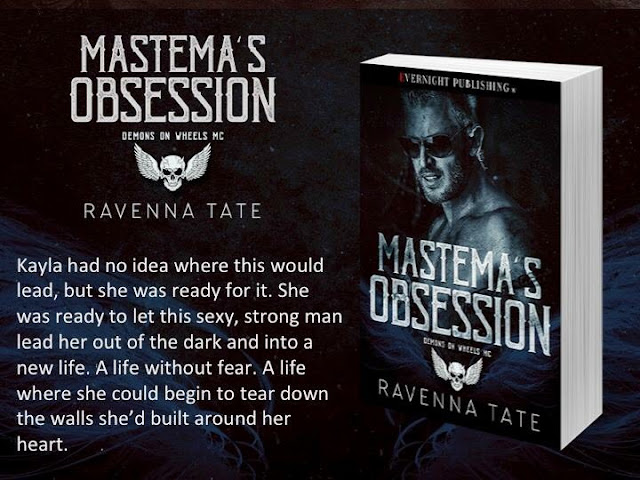 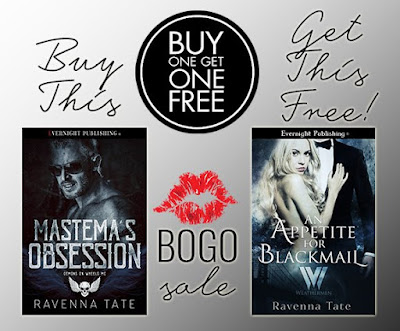 **Only on the Evernight Site ... buy Mastema's Obsession and get An Appetite For Blackmail for free** 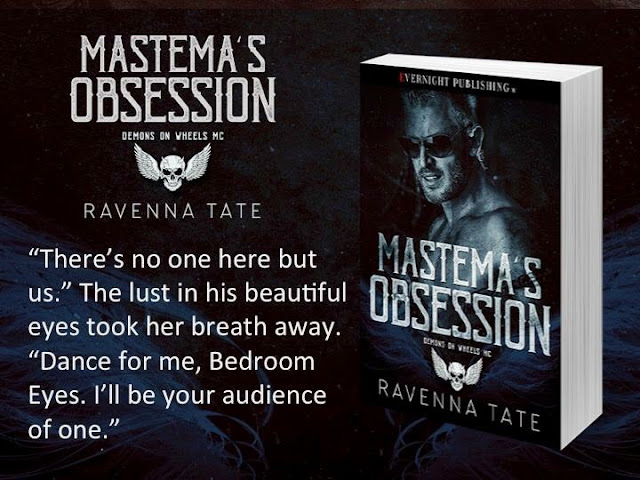 
Kayla’s moans brought him back to the present. Pushing three fingers into her now, he coaxed the inevitable climax along, using his teeth and tongue on her clit to help it along. When it crashed over her, she yelled so fucking loudly he was certain anyone in the hallway right now would hear her.

Mastema played with her even after she came, prolonging the contractions until her moans turned to whimpers and she panted. Only then did he rise to his knees and pull on his cock again. “Open your mouth.”

Letting her get used to his length that way did the trick, and he didn’t mind waiting. If he fucked up the trust she’d shown him the first time he handcuffed her, he wouldn’t get a second chance. And the Brothers never forced a woman to fuck them. It wasn’t their way.

Once he was able to push his cock all the way in, Mastema moved faster, debating whether to give into his needs and come inside her mouth, or fuck her tasty pussy raw. Holding back was torture, but he loved it. The sexiest woman he’d met in a long time, handcuffed to his bed, taking his dick into her mouth right down to his balls. Every man’s ultimate fantasy.

He pulled out and held his shaft poised at her lips. “Lick it.”

After giving him a quick grin, she moved her tongue up and down the length, swirling it around the tip and flicking it across the delicate skin as she moved. She alternated that with long, slow strokes, making sexy, soft noises every few seconds. It drove him insane. He wasn’t sure he could hold off long enough to fuck her pussy.

That did it. Mastema growled low in his throat and shoved his cock back into her mouth. He held her head again, giving her the entire length with each hard thrust. When she wrapped her lips around her teeth and sucked hard, he groaned. No way could he stop this now.

“Jesus,” he whispered. “But I still want to fuck your pussy. Make me hard again.”

Mastema grabbed his dick and pulled hard, gazing into her beautiful blue eyes. He was in deep shit here with this one, but right now, he didn’t care. He only knew he had to fuck every hole, again and again.

One hand still on his shaft, he played with her tits and finger-fucked her until his cock was ramrod straight once more. The fucking condoms were in the nightstand, but he couldn’t chance not using one. He reached past her and opened the drawer, put one on, wincing the entire time. Once he was sheathed, he lifted her up and positioned her ample ass cheeks on top of his thighs.

“You want it, you got it, Bedroom Eyes. I won’t stop until you fucking cry.”

You Can Read Chapter One Now 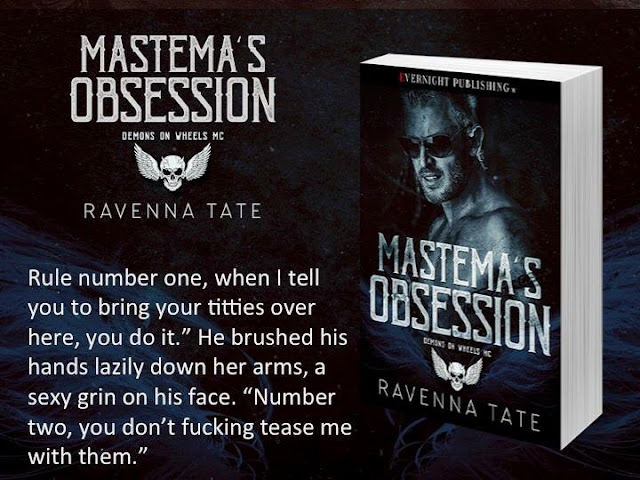 Kayla "Bedroom Eyes" Romanowski has been through some tough times throughout her life, but she have finally found the place she was always meant to be.

Dan "Mastema" Treadstone has loved and lost, so he devotes his time to the club and his Brothers.

Mastema was immediately taken with Kayla but she's been keep him at arm's length. However, when a situation arises, Kayla see's Mastema in a whole new light.

Their passion combusts into an inferno that no one can deny. But when their past come back to haunt them, can they work through their issues and embrace their new relationship? Or will it be just too much and cause Kayla to run away without looking back?

Mastema's Obsession is a sultry, intense, panty melting read that will keep you captivated from start to finish. Mastema is an alpha hero that will make you weak in the knees with just one look. When he tell you all the deliciously dirty things he'll do to you, you know he'll leave you satisfied and still begging for more.

Kayla may not have made a good first impression, her past made her keep to herself, but she tries hard to get over that and embrace her new life in the club. I admire her strength to do whatever it takes to survive. It may not have been easy, but she perseveres.

I really enjoyed Mastema's Obsession and couldn't put it down. It's hot, passionate, thrilling, and intense. What I love about this read is that they both have a past that would deter them from find love, but they end up embracing love with everything they have.

I am loving the Demons On Wheels MC series and with each book, it just keeps getting better and better. I can't wait to see what Ravenna will bring us next. 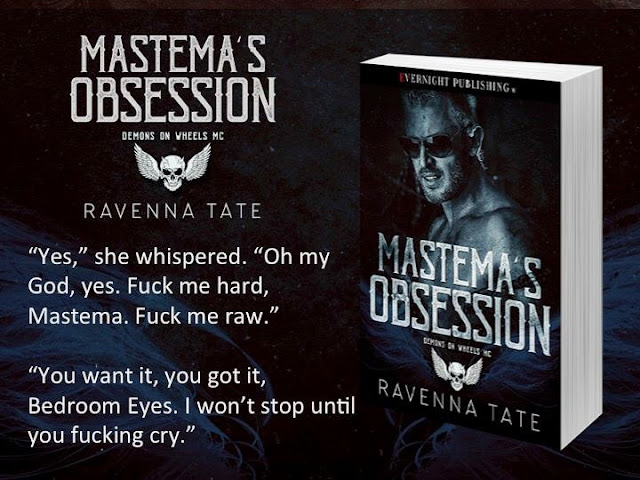 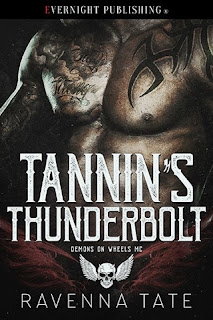 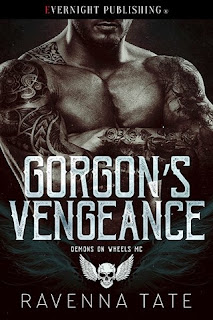 Chloe Dolan’s life is perfect. She’s the MC President’s old lady, she loves to dance at Scotty’s Place – the strip club the MC owns and operates, and she and Gorgon are deeply in love. But Chloe’s perfect life falls apart one night after her last set when she spots her abusive ex-boyfriend, Brad, in the crowd. He’s been gone a year, but now it appears he’s back to stay. 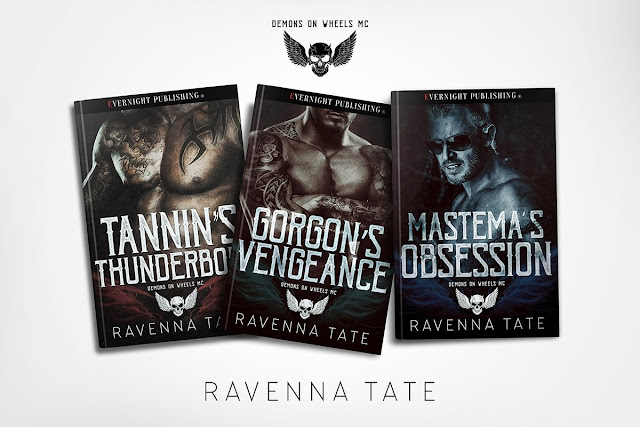 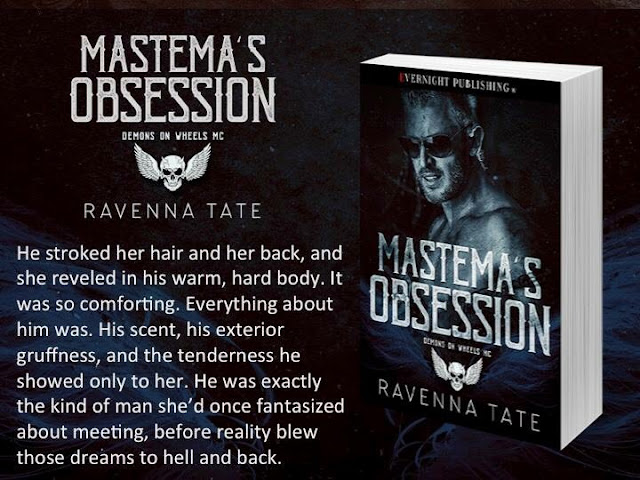 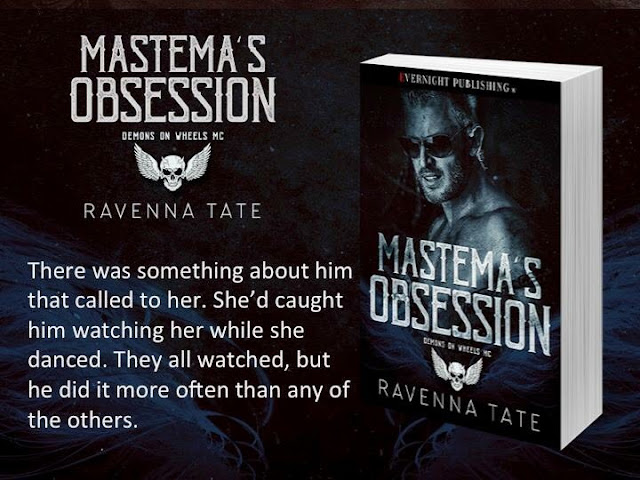