She won't be able to resist this tight end.

The Rivalry by Nikki Sloane releases on November 21st!

Keep reading for an Excerpt!

Add to Your TBR 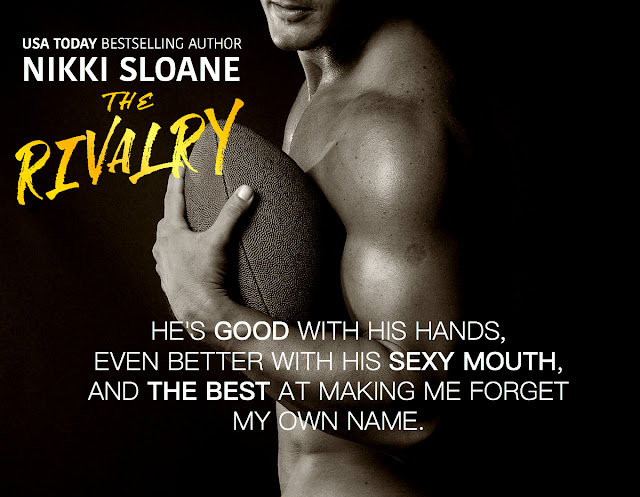 This tight end is at the top of his game.

He’s good with his hands, even better with his sexy mouth, and the best at making me forget my own name. His—ahem—stats are perfect.

But I can’t fall for him.

He might be everything I want, all rolled into a glorious package of gridiron god, but there’s one teeny-tiny problem. The vile, loathsome team I’ve spent my entire life hating—my beloved school’s arch-rival?

This guy is their star player.

Holy mother of God, this guy knew how to kiss. Jay’s lips pressed to mine. Gentle, and slow, but it ignited a fire that burned all through my body, sizzling out to the ends of my fingertips and toes.

The way he moved his tongue in my mouth was something else. It was sexy. Maybe even a little dirty, and a whole lot of awesome. Beneath his kiss, I was going to melt. If he wasn’t careful, I’d turn molten and pour down the side of the stone wall he’d set me on.

The added height of the wall was great. All he had to do was tilt down to meet me. His face was in my hands, and I brushed my thumbs over his cheekbones, enjoying the sensation of the rough ends of the whiskers on his jaw.

He smelled freaking amazing. I didn’t just want to make out with this guy, I wanted to inhale him. It’d been some kind of torture slow dancing with him earlier. My body had been tight with anticipation, hoping he’d make a move later. Only, here we were, lips locked—and the anticipation didn’t go away. It graduated into need.

How long could we be out here before anyone noticed we were gone? I couldn’t think like that. We were secluded in the shadows, and as the sunlight continued to fade, it’d only feel more intimate here in the woods with him.

Jay left a trail of damp kisses across my jaw as he made his way to my ear. His hot breath rasped the moment before his lips landed on the sensitive skin on my neck, just below my earlobe. I was burning alive, yet I shivered. Goosebumps broke out on my legs. Oh my God, that felt good. Something as simple as his warm mouth against my skin made every inch of me weak with desire. I ached.

“I’m kind of pissed at Dave,” Jay mumbled into my skin, right at the spot where my neck met my body.

“Why the hell didn’t he introduce us?”

I wanted to laugh. Or tell him I’d had the same thought. But Jay’s lips had rendered me unable to do anything. I couldn’t even breathe. Every inch of me was sensitized and hyperaware of him. I was turning to liquid in his hands, and he was barely touching me.

My eyes fluttered closed as his mouth crept along the length of my collarbone to the base of my throat and continued to the other side. His hands settled at my waist, but the longer we kept kissing, the bolder he seemed to grow. His palms inched upward.

It was like I’d drawn up a playbook and every route was executed flawlessly by Jay.

Breath caught in my lungs as his hands slid to a stop on my ribcage, pausing just below my breasts. The heat of his palms was a hot iron, seeping through my chiffon dress. I wanted him to keep going, but I also grew nervous. I wanted him too badly. Too much. I wasn’t the type to be reckless or have a random hookup.

His mouth found mine, and his kiss was urgent. Needy. It was loaded with lust, and I was desperate to give in to it.

“You were right,” I said, trying not to pant it out. “Your kiss needs to come with a warning.”

A noise escaped the back of his throat. A deep, wicked chuckle.

It was too hot for Ohio in August. Even in the shade, it was a million degrees Fahrenheit. Sweat blossomed on my skin, beading into tiny drops as Jay shifted his stance between my parted legs and urged me closer. I dry swallowed when there was no space left between us, and his hips pressed against the insides of my thighs. My skirt rode up, and I could feel the firm bulge in his pants nudging me.

It was powerful knowing I’d turned him on, and it was just my kiss that seemed to be doing it. My blood had burst into steam in my veins the moment his lips locked onto mine. I’d never had a kiss like his. Didn’t even know I was capable of this kind of feeling.

I hadn’t intended to do more than kiss him, but now I craved more. “Oh, God, do it,” I whispered, arching my back and making it as clear as possible what I wanted. I stared into his intense blue eyes, watching his lust-filled expression as he followed my plea. I sighed in relief as he moved his hands one inch up, followed by another.

Until his hands covered my breasts, gripping me through my dress. I moaned, but it was swallowed up under his dominating kiss. Jay drew my bottom lip into his mouth and bit down. Just a hint of teeth. I inhaled sharply, but not in pain. His action had sent pleasure zinging between my legs.

“Kayla.” He broke the kiss only for a moment. “You are so fucking hot.”

The earth was spinning like I was drunk, only I wasn’t even buzzing from alcohol. This was entirely him.

Nikki Sloane landed in graphic design after her careers as a waitress, a screenwriter, and a ballroom dance instructor fell through. For eight years she worked for a design firm in that extremely tall, black, and tiered building in Chicago that went through an unfortunate name change during her time there. Now she lives in Kentucky and manages a team of graphic artists. She is a member of the Romance Writers of America, is married with two sons, writes dirty books, and couldn’t be any happier. 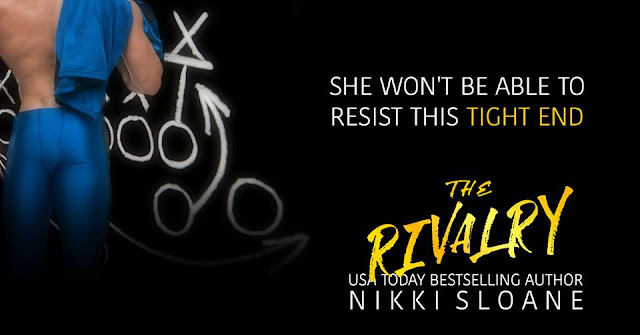