Cover Reveal & Giveaway ~ My Enemy Next Door by Nicole London and Whitney G.

"You are a cocky, arrogant asshole and I sincerely wish you misery for the rest of your life...PS--You weren't *that* damn sexy... "

Those were the last lines I wrote in Jace Kennedy's yearbook before graduating high school.

Enemies from the moment we met, we went out of our way to avoid each other whenever we could. And in the moments that we couldn't? Our heated arguments were strong enough to light the world on fire.

He was an all-star prick. Plain and simple.

I was a "band geek with fugly-ass braces." (Not true at all.)

Needless to say, I couldn't wait to leave him and our small hometown of Blue Harbor behind.

Now that it's ten years later, I've graduated from Harvard Law at the top of my class, and I'm working at the firm of my dreams. I'm happier than I've ever been, surrounded by new loyal friends, and ready to compete for the lead lawyer position.

Until I find out that Jace Kennedy graduated from law school, too.

Until I realize that he'll be working at the same exact firm, in the office right across from me.

And if that isn't unfortunate enough, he's far sexier and way more arrogant than I originally remembered. (Oh, and last night he moved in next door...)

Also in the Series

I should’ve never agreed to this arrangement…

Thirty days ago, my boss—Mr. Wolf of Wall Street, came to me with an offer I couldn’t refuse: Sign my name on the dotted line and pretend to be his fiancée for one month. If I agreed, he would let me out of my employment contract with a “very generous” severance package.

The rules were pretty simple: No intimate kissing, no actual sex. Just pretend to love each other for the press, even though I’ve secretly wanted to knock that sexy smirk off his face since the first day we met.

I definitely didn’t need to think twice about this. I signed my name and started counting down the seconds to when I would never have to deal with his special brand of ass-holery again.I only made it to one minute…We argued the entire four-hour flight to his hometown, failed to make a convincing impression with the welcoming press, and right when I was about to knock that arrogant look off his face in real life? He purposely dropped his bath towel in front of me, distracting me with his nine-inch cock to “show me who the bigger person was” in our relationship. Then he gave me his trademark smirk once again and asked if I wanted to consummate our marriage.

Tragically, this is only day one.
We still have 29 more days to go…

Whitney G. is a twenty-eight-year-old optimist who is obsessed with travel, tea, and great coffee. She’s also a New York Times & USA Today bestselling author of several contemporary novels, and the cofounder of The Indie Tea–an inspirational blog for indie romance authors.

When she’s not chatting with readers on her Facebook Page, you can find her on her website or on instagram. (If she’s not in either of those places, she’s probably locked away working on another crazy story.)

Don’t forget to sign up for Whitney’s monthly newsletter.

Nicole London is a hopeless dreamer, author of Resentment and the co-founder of The Indie Tea, an inspirational blog for indie romance authors. When she's not at Starbucks chatting books with her best friend, she can be found plotting her next travel adventure with her husband. 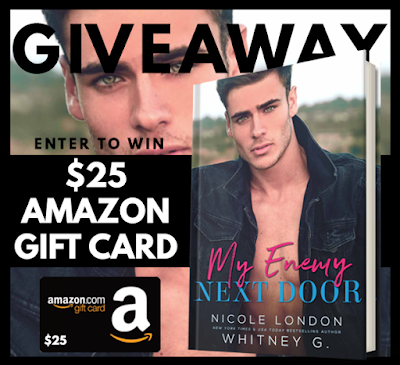