Work Me Up by Sasha Burke is now available!

Nicole is without a doubt the oddest creature I’ve ever met.

As far as counselors go, she seems pretty damn good, even though her methods are way the hell out there. And I actually like that she uses my gym for her afterschool sessions. That is, until she starts sticking her nosy—albeit gorgeous—butt into my business. It’s bad enough the sexy little smarty has wormed her way into my head. There’s no frickin’ way I’m letting her psychoanalyze the rough patch my kid’s going through. I don’t care how much the woman knows about this stuff; my daughter is my life. We’ve been doing just great on our own, no outsiders needed.

The only problem? The persistent menace apparently has a set of keys to get in…

Logan is without a doubt the most fascinating man I’ve ever met.

As far as billionaires go, he’s far from typical. Practically allergic to the indoors and stubborn to the extreme, but an absolute teddy bear—of the gruff, burly, mountain-climbing variety—when it comes to his daughter. And for some reason, I seem to rub him the wrong way. Unsurprising, since I’ve never really been good at rubbing men the right way…pun entirely intended. What I am good at though, is working with kids. The man needs my help, even though he doesn’t think so. He may be the most loving father I’ve ever encountered, but this here is my domain.

The only problem? My clothes seem to keep falling off whenever we’re alone together…

Note: This is a quick, steamy romance with lots of chemistry and very little drama for the on-the-go reader looking for some frisky, feel-good fun. Contents include: a big, rugged single dad being driven crazy by a quirky, head-shrinking heroine, copious hot, dirty, descriptive sex, and a swoony instalove plot complete with a sweet HEA. No cheating, no cliffhanger.

Sasha Burke has been reading romances ever since she discovered her local library would let her borrow whatever kind of books she wanted…probably far younger than she should’ve started.

Possessive and protective alpha heroes have long been Sasha’s biggest weakness. Reading and writing about them, especially when there’s a feisty heroine involved, has resulted in her staying up many a night over the years.

You’ll usually find Sasha out and about spoiling her many dogs, or trying to perfect the world’s greatest mac & cheese recipe (and tirelessly taste-testing practice runs in that pursuit), or hosting outdoor fajita nights for her friends as often as she can.

To get alerts on her new releases along with surprise bonus content and other goodies throughout the year, join her Email List. 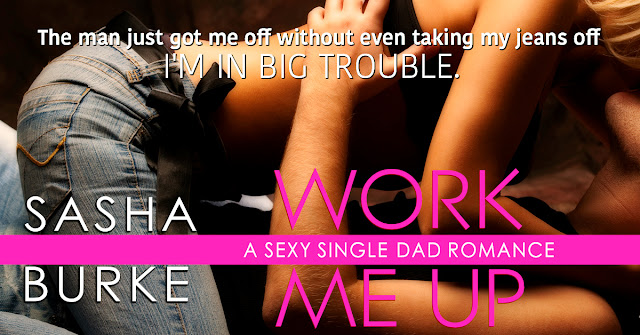