Fall in love with seven sexy and irresistible soldiers who find their courage and heart tested like never before in the battle for love! This multi-author collaborative series of contemporary romance novels is brought to you by bestselling authors Barbara Freethy, Roxanne St. Claire, Christie Ridgway, Lynn Raye Harris, Julia London, Cristin Harber and Samantha Chase. You won't want to miss a single one! 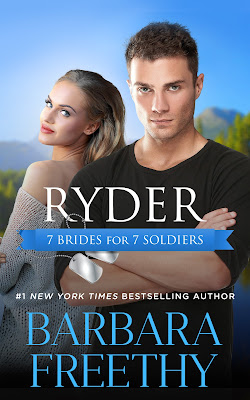 When Navy pilot Ryder Westbrook is shot down, his only thought is making it home—to the place he left behind a long time ago. But dreaming about the small town of Eagle's Ridge and going back are two very different things, and upon arrival Ryder finds himself in the middle of another battlefield—an old family feud between the Westbrooks and the Tuckers. To complicate matters, he needs disputed land to start his second career at the local airfield. He decides to enlist the help of beautiful Bailey Tucker, but the chef soon has his senses spinning in another direction…

The last person Bailey is interested in helping is golden boy Ryder Westbrook. After a painful personal betrayal, irresistible attraction to another man, who is probably too good to be true, seems like a terrible idea. But she also needs something from the Westbrooks, a chance to start over and build the restaurant of her dreams.

Ryder and Bailey make a simple plan—work together to get what they both want, but what happens when they find out what they really want is each other?

Navy pilot Ryder Westbrook heard the panicked words of his copilot, Michael Valdez, but he was too busy trying to regain control of the SH-60 Seahawk helicopter to reply. They were coming back from a humanitarian mission—having dropped food, water and medical supplies into the rugged and remote villages of Afghanistan—when they'd taken enemy fire.

They weren't going to make it back to the carrier in the Persian Gulf. They were going to have to set down somewhere, hopefully far from the rebel forces that had just shot at them.

His heart pounded against his chest, but he remained calm, his training playing through his head as he went through every option to retain control of the twin-engine helicopter.

Flying was in his blood. The helo had always felt like an extension of his own power, but now that power was crumbling, and he was being forcibly reminded of just how fragile life could be.

But he couldn't quit. There had to be a way out.

Unfortunately, his optimism was dampened by the fact that the ground was getting closer by the second, and his crew was depending on him to get them down safely.

His copilot had a wife and a baby back in the States. Colin Forbes, the sensor operator, was getting married in a month. And he…well, he still had things he wanted to do.

He had to keep them all alive.

Searching the ground for a viable landing site, he spotted what appeared to be a flat, open rural area. Not only did he want to protect his crew, he didn't want to hurt anyone on the ground.

Glancing over at Michael, he saw his friend making the sign of the cross.

"We're not going to die," he said emphatically, drawing Michael's gaze to his. "Not today. Not this time."

He could see the hope in Michael's eyes. His friend wanted to believe him.

Hell, he wanted to believe himself.

He'd been in tight spots before, and he'd always come out on top. It had been that way his entire life. Growing up in Eagle's Ridge, he'd been the golden boy—the one who set new records, who made things happen, who achieved whatever he went after.

But this was real life. This was happening now, and he was the only one who could save all their lives.

In ten years of naval service, he'd never encountered a situation exactly like this. He'd never felt so worried that his number might really be up.

He shook the negative thought out of his head, squaring his jaw, tightening his hand on the controls, as he rode the bird down to the ground.

The impact was harder than he'd expected, the helicopter shattering into pieces of fiery metal. And when everything went black, he fought against the idea that this might be it.

He had more he wanted to do, people he should have made peace with a long time ago, a home that beckoned to him—the Blue Mountains, the Snake River, the people of Eagle's Ridge—a life still to be lived.

He needed more time… He just didn't know if he was going to get it.

Barbara Freethy is a #1 New York Times Bestselling Author of 60 novels ranging from contemporary romance to romantic suspense and women's fiction. Traditionally published for many years, Barbara opened Fog City Publishing in 2011 and has since sold over 7 million books! Twenty-three of her titles have appeared on the New York Times and USA Today Bestseller Lists, including one title, Summer Secrets, which hit #1 on the NYT. In 2014 Barbara was named the Amazon KDP Bestselling Author of all time! She was also the first Indie writer to sell over a million books on Barnes and Noble.

Known for her emotional and compelling stories of love, family, romance and suspense, Barbara is a six-time finalist and two-time winner in the Romance Writers of America acclaimed RITA contest for her novels Daniel's Gift and The Way Back Home.