Blog Tour ~ A Baby for the Viking Wolf, A Howl Romance, by Gwen Knight 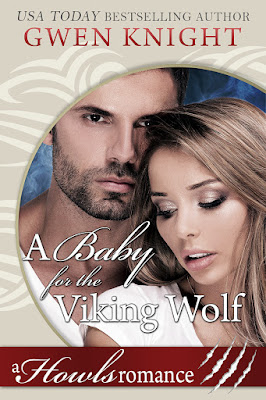 Lucy Tullet's entire world has imploded, thanks to the two soft pink lines staring back at her. As a professional party-girl, she never considered settling down and having kids. Until she meets the blood wolf—a renowned Viking vampire hunter with a mysterious past—and spends the night in his arms. Now, thanks to him, everything has changed. Not only are there vampires running amok in town, hunting Lucy and her unborn child, but the blood wolf has staked his claim, determined to both protect her and take her as his mate.

"Lucy," he repeated as he studied my face. "A lovely name for a lovely woman."I cleared my throat and stepped back, putting space between us. "Are you here as a bachelor then?"Bemusement tugged on his mouth. "I'm flattered. But no."

"So, if you aren't here as a bachelor, and you're not part of the European pack…" I let my sentence dangle with the hope that he'd answer my unspoken question. What other reason could there be for his presence? Unless…understanding dawned. "Are you here to bid on one of the bachelors?"

Surprise widened his dark eyes, and he choked back a laugh. "Uh, no. While I'm sure they're fine men, they're not the one I'm interested in."

Heat spread through my cheeks.

"Um. We'll just…be elsewhere," Bailey said. "Like, over there. Yeah, over there works."

"Come on, dummy." Bailey grabbed Evelyn's arm and wrenched her toward the bar.
The blush spread down the back of my neck. Within five minutes, the entire pack would hear about this. Those two women were the absolute worse sort. Gossip was like air to them.

"So." I shot him another look, my tongue suddenly heavy in my mouth.

This was ridiculous. I wasn't the sort who gummed up in front of a man. I was the sort who took initiative, who dragged them out onto the dance floor for a good time, who used them, then ditched them the next morning. Yet, here I stood, nervously fiddling with my glass, my mouth drier than the desert. All because Mr. Europe was hotter than hell itself.

I cleared my throat and tried again. "What are you here for then?"

His brows furrowed. "I came to see someone. But they didn't show."

A woman someone? I wanted to ask. Except, the words died in my throat. "And you're really not part of the European pack?"

"No." He chuckled, the expression lighting up his face. I loved the sound of it, deep but gentle, as though he laughed a lot. "In fact, I only arrived in America this afternoon."

My lips parted. "Wow. You even managed to score a sweet tux, too. Impressive."

He bowed his head. "I aim to please."

"Did you come to America to meet this friend of yours?"

"I did. Guess that won't be happening tonight, though."

"And this friend…" Just ask! "A female friend?"

His smile broadened, flashing a pair of dimples. "No. Just an old friend. But he's not here, and you are. So, I call that a win."

I ducked my head, the bunnies in my stomach launching into full-blown butterflies. Damn it, stop playing coy! Reagan often called me a man-eater. Time to put up or shut up.

"Well then." I handed my empty glass to the next server who strode by and grabbed two fresh drinks, handing him one. "If you're not from the European pack, then I offer you my sincerest apology for the way I spoke to you earlier."

"That so?" His mouth ticked upward. "I'm honored. I get the impression you don't apologize often."

"I'm not often wrong," I said with a playful wink.

"Ah, beauty and brains, then?" Before I could respond, he plowed onward. "I take it you're here to bid on one of these fine gentlemen tonight?"

"Yup." Not that I wanted to anymore. The only devilishly handsome werewolf I wanted to play with was the one standing in front of me. "You sure you're not supposed to be up there?"

Most definitely. I'd bid every last cent on him. Problem was, from the many hungry glances sliding his way, I wasn't the only one interested. And I wasn't known for sharing. After a moment's consideration, I shook my head. "No, you don't belong up there."

He clutched at his chest. "You wound me, madam!"

"It's for your protection, and everyone else's too. I wouldn't want to have to kill everyone who bid on you just to get what I want."

He stepped closer, his scent overwhelming my senses. "I'm intrigued. What is it you want?"

"You tell me," I murmured, my voice taking on a husky note.

His fingers brushed against mine, teasing, taunting…playing the game. I gave a slow blink and lifted my gaze to his, my mouth curling into a sensuous smile.

Without warning, he cupped the back of my head and brushed his lips against mine. Slowly at first, tasting what I had to offer. Teasing me with the promise of something more. I'd expected him to ravish my mouth, but instead, he took the time to seduce me. Heat spread through my body, and my damn knees buckled. His touch feathered against my bare back, eliciting a shiver unlike anything I'd ever experienced. My whole body attuned to his, and he'd done little more than offer a chaste brush of our lips.

We parted, my chest heaving beneath my dress. His gaze dipped to my plunging neckline, his eyes sparkling at the sight of my flushed skin.

"I have a room upstairs," he rasped.

Hallelujah. Because we sure as hell wouldn't make it back to my place.

Screw the auction. Gabriel had sent me to smooth over the press, and to donate money to a good cause. Neither of which I'd done. But I'd already won the night as far as I was concerned, without spending a single cent. I could easily donate the money without bidding.

I licked my lips, excitement dancing in my stomach. "Now," I murmured. "Right fucking now."

He flashed me a grin. "A woman after my own heart."

Gwen Knight is a Canadian girl currently living in Jasper, AB. She graduated from the University of Lethbridge with a degree in Archaeology and Geography. Her interests consist of playing in the dirt, designing elaborate snow forts, boating, and archery. 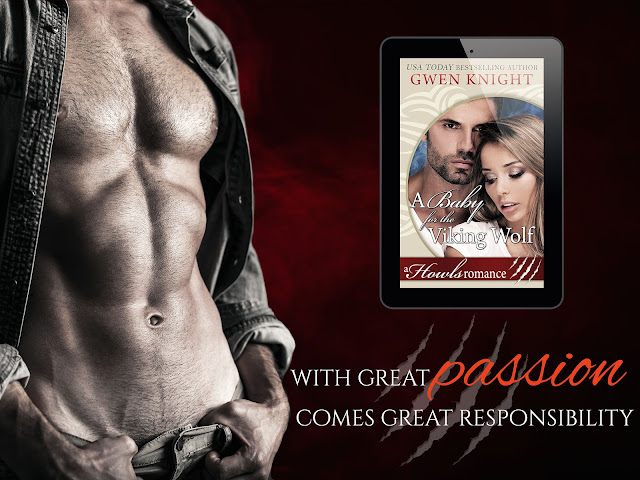