Book Tour ~ No Holds Barred, In The Heart of Valentine #1, by Stephanie Nicole Norris

Love was no longer on the menu for Camilla Augustina. After her fiancé calls off the wedding not once but twice, Camilla's had enough. In a brazen move, she takes a new position in the windy city of Chicago; leaving her parents, friends, and ex in a bittersweet goodbye. Adapting to her new surroundings isn't easy but as Camilla settles in a chance encounter with an infamous playboy throws her off balance and rattles her world. She hadn't expected to be drawn so meticulously to another but denying the magnetism that lures her is a futile fight.

As President of VFC Energy, a fortune 500 company, Hunter Valentine is at the top of his game. The renowned bachelor holds no secrets about his risqué rendezvous, and his allegiance is saved for family only. However, when Hunter spots Camilla Augustina, dining alone at the breakfast hut in his building, he can't explain the adulation that runs through his core and shakes his entire world. Lust never weakened him like this, and the inclination of love at first site was silly. But when Hunter decides to prove the sudden rapture is unreal, he may find himself enamored by love.d 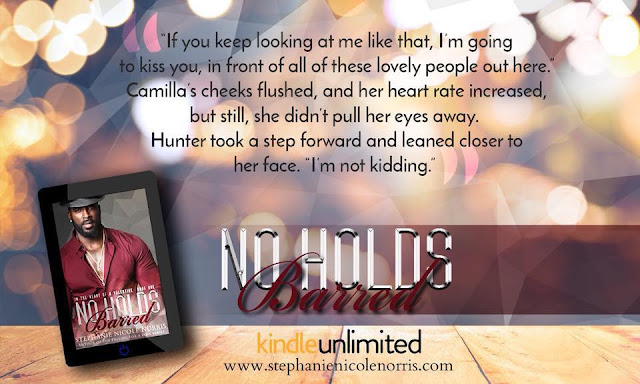 Subscribe to Stephanie's newsletter and receive a free teaser 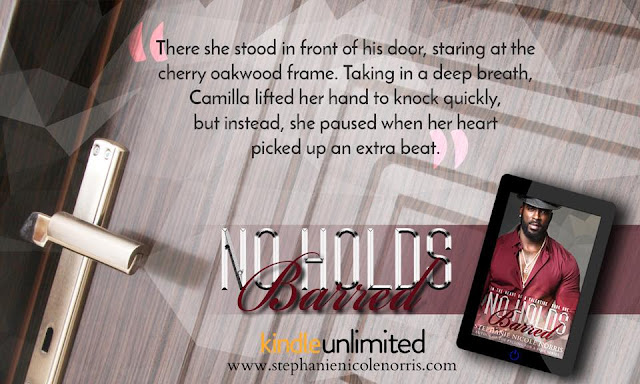 
“Good morning,” a hostess chimed as she entered.

“Good morning,” Camilla replied. She glanced around the bistro, noting the bustling activity. “It seems you have a full house.”

The hostess looked around as if she hadn’t notice.

“I have a special spot just for you,” the hostess sang.

The hostess put on a bright smile. “Right this way.” She turned with a sharp twist and meandered easily through the restaurant.

A few busboys passed them as they headed for a table to the far right of the eatery. “Excuse me,” one said as he scurried around Camilla, wiping a hand on the neatly folded apron tied around his waist.

“How’s this,” the hostess said, stopping at a small table.

“You did have the perfect spot,” Camilla said, staring out the window to the hustling Chicagoans who strolled through the downtown streets. “Nice and tidy, too,” she continued taking a seat at the short table.

“Yeah, we’re always crowded this early. Are you new to The Regency?”

The hostess’ eyes popped. “In that case, let me be one of the first to welcome you to Benjamin’s Breakfast Hut. I’m Alicia, it’s nice to meet you.”

“Camilla, your server will be with you in just a second.”

“Thank you again,” Camilla responded. She set her briefcase down and pulled out her cell phone. Camilla could sit for thirty minutes before she made her way to work. The beauty of being on the staff at WTZB was that it was within walking distance of The Regency, which was another plus when Camilla decided to rent a space in the luxury towers. It had only cost her a small fortune to lease the mini penthouse suite, but it was well worth the security and convenience.

She strolled through her missed calls. Two of them were from her friend Corinne Thomas whom Camilla had worked with for five of her seven years at News 12 before Corinne left the studio to become a stewardess. Camilla was also supposed to call Corinne for safe check-in as well, but she’d yet to do so. The other five missed calls were from Stephen her ex-boyfriend, the last person Camilla wanted to talk to.

After being engaged to Stephen for three years, Stephen suddenly decided marriage wasn’t for him. He called it off the minute Camilla began bridal shopping. Six months later, Stephen was back, begging for a chance to show Camilla he’d changed. For three months, Camilla let him fester and beg like the dog he was, but she eventually took him back. Another two years of her life later and Stephen was doing it again, calling off the wedding. Camilla had had enough, letting Stephen know there would never be another chance for them. That was eight months ago, and now he was back again, ringing up her phone, probably wondering why there was a for sale sign in her yard.

Camilla skipped right over his number and hit send on Corinne’s. “Pony” by Ginuwine cruised through the receiver, and Camilla frowned.

“I was just getting ready to put an ABP out on you,” Corinne answered.

“Before we can move any further with this conversation, I need to know why Ginuwine is singing to me when I’m calling you. Is that seriously one of those ringback tones?”

Corinne cleared her throat. “Oh, so you didn’t have Missy Elliot singing when someone called you?”

Camilla’s lips thinned out. “Yeah, like ten years ago.”

Camilla laughed in whispered tones. “What happens when your boss calls and ‘Pony’ plays in his ear?” Camilla continued to laugh.

“I like how you just flipped this whole conversation around to me,” Corinne said. “I suppose you’re safe.” Corinne’s voice was stern, and Camilla knew she’d upset her.

“Aww, okay, I’m sorry. There’s nothing wrong with your ring back tone,” Camilla lied. She dropped her head in her hand and shook it slightly. “I’m okay. Thank you for calling to check on me.”

“Yeah, you did. And I wish we could’ve come up on the weekend together.”

“Ooh, that would’ve been nice. Then I could get all up in your Chicago business.”

Camilla chuckled. “I don’t have any Chicago business. Yet, anyway—”

The timbre of his voice not only sent a shrill of heat cascading over Camilla’s body, but it also caught her by surprise and threw her off balance. Bringing her eyes up to the mystery man himself, Camilla’s heart skipped a beat as her sight took in the magnificence of his stature. Black suit pants laced around his powerful thighs and what Camilla knew was probably a taut ass. A leather Christian Dior belt buckle aligned through the loopholes of his pants, holding a pristine shine.

The maroon long sleeve button-down shirt stretched up the barrier of his grandiose wall of muscle and waved slightly over the pecs in his chest. With his collar flipped down and the first two buttons undone, his unblemished coffee brown skin was displayed. Camilla swallowed so hard she could’ve ingested her tongue. Her heart binged in her chest, and Camilla had a hard time trying to recover.

As if the palpitations weren’t bad enough, Camilla’s gaze locked with her mystery man, and immediately, she felt pulled toward him. With piercing dark brown eyes, he held her stare just as his tongue cruised across his lips to wet his mouth.

“I don’t mean to interrupt you, but, there’s nowhere else to sit while I have my breakfast, so I was hoping you’d have mercy on me and allow me to dine with you.”

“Corinne,” Camilla said, speaking into the phone, “I’m going to call you back.”

Stephanie Nicole Norris is an author from Chattanooga Tennessee with a humble beginning. Always being a lover of reading, during Stephanie’s teenage years her joy was running to the bookmobile to read stories by R. L. Stine.

After becoming a young adult, her love for romance sparked leaving her captivated by heroes and heroines alike. With a big imagination and a creative heart, Stephanie penned her first novel Trouble In Paradise and self-published it in 2012. Her debut novel turned into a four book series full of romance, drama, and suspense. As a prolific writer, Stephanie’s catalog continues to grow. Her books can be found on Amazon dot com. Stephanie is inspired by the likes of Donna Hill, Eric Jerome Dickey, Jackie Collins, and more. She currently resides in Tennessee with her husband and two-year-old son.

Write Now Literary is pleased to be coordinating a blog tour Stephanie Nicole Norris.
Book your own tour here.