The Ash Brothers—they know how to handle their wood

They call me Big Johnny, and they’re not wrong. I’m big all over, and burly, too. But when it comes to her, I’m a freaking pussycat.

There’s never been a time when she wasn’t on my mind, not even when she left Rockbridge for college. Those four years were the hardest of my life. Literally.

Saving myself for her has never been the problem. It’s telling her how I feel.

She’s back now and it’s painfully obvious to even a lumberjack like me: Flora’s not a teenager anymore. She’s a woman who knows what she wants.

They called me Big Johnny because of my size. At six foot seven I was a beast compared to most men—even my brothers, who were well over six feet themselves. But there was one woman who made me feel even bigger than that.

I stared off as the car pulled away from the lumberyard. Flora was in there, and yet I didn’t have the balls to go and speak with her. She was too young for me, too innocent. At only eighteen she had the entire world at her fingertips, her future so damn bright I wasn’t about to muck it up because I had feelings for her. I was twenty-five, seven years older, far too old to want anything romantic with her.

She’d bloomed into a woman. Before this summer I hadn’t paid much attention to her. She was just the daughter of family friends, not someone I’d even thought about. But shit, this past summer when we’d had that big cookout and she had come over with her folks, she was all woman. But I still wasn’t going to touch on that, wasn’t going to go after her. That would have been crossing a whole lot of fucking lines.

I wiped the sweat from my face with a rag I’d gotten out of the front of my truck. I stared off as the car disappeared down the road. I felt someone watching me and glanced at Noah. The look he gave me told me maybe he had a suspicion about what I felt for Flora, or maybe I was reading too much into it. Maybe I was feeling guilt over it all. And I kind of did feel guilty. I couldn’t understand why I felt this way, but the emotions were right there at the surface, wrapping their hands around my neck and refusing to let go.

Shit, it was good she was going off to college. She’d meet a nice guy her own age. But the very thought of that pissed me off. I felt rage boil up in me at the very thought of her with another guy, of some asshole touching her, holding her. I wanted to be the one to do that, to make sure she was safe.

Fuck, get a grip.

I finished wiping the sweat off and got back to work. No, her leaving was a good thing, even if it fucking sucked. And if she did meet some guy, had a nice life with him, well, she deserved that and I’d deal with it. I had no choice. 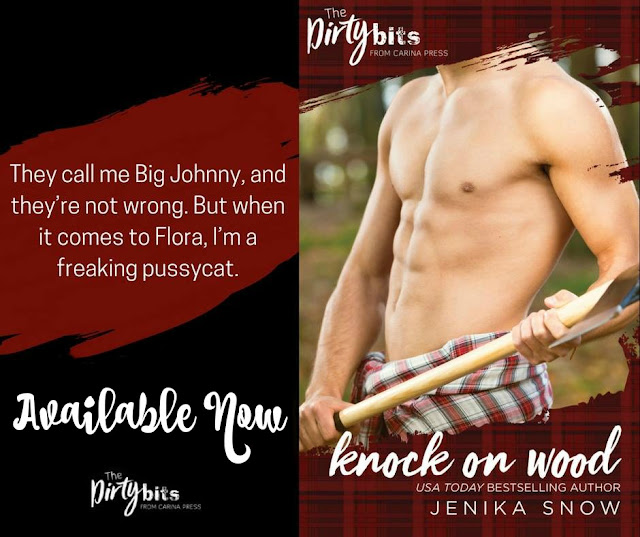 Flora Beaumont fell in love with Big Johnny so many years ago, but has never had to courage to tell him. Now back after going away for college her feelings have only strength. Can she finally tell him her long held secret or will she keep it to herself?

Johnny Ash fell hard for Flora but didn't act on those feelings because she was too young and getting ready to leave for school. But she's back now and he knows now is the time to make his move.

Fate takes a turn and brings these two together, and once that line is crossed, their lives are forever changed.

Knock On Wood is a fun, sultry, captivating read from start to finish.

I really love how Flora and Johnny are both virgins because they knew beyond a shadow of a doubt the other was their "One". Their connection is intense and only grows deeper and stronger once they finally admit their feelings.

I enjoyed Knock On Wood and the storyline that Jenika wove made time fly. Now I really can't wait for what will come next with Liam.

So do yourself a favor and knock on some wood and fall in love with Flora and Big Johnny.

Jenika Snow, a USA Today bestselling author, lives in the northeast with her husband and their two daughters. She prefers gloomy days, eats the topping off of her pizza first, and prefers to wear socks year round.