Beau LaForte felt an internal pull to the beautiful, innocent Alexa Davidson. Oh, this was not the typical boy-meets-girl story. This was anything but typical. You see, Beau was a shifter – a panther – and the alpha of the pack. What his panther wanted, his panther got. And together, they wanted Alexa.

But when Alexa finds the pretty kitty lolling on her bed, she is determined to get him out -- before he sheds more on her brand new sheets! Can Beau convince Alexa that she is his mate for life? 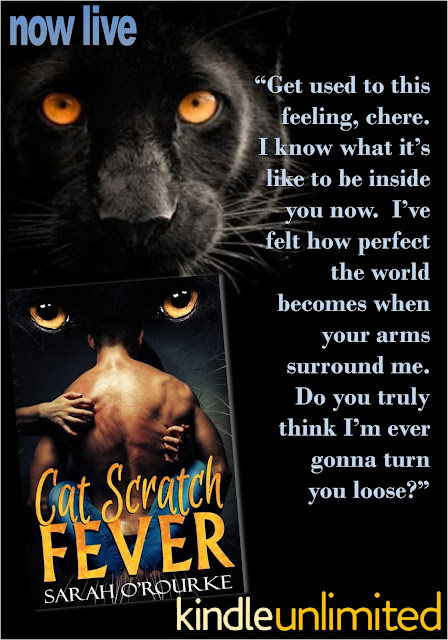 Taking a deep breath, Alexa drew herself up to her full height and steeled herself for a battle. Although, since she stood just an inch over five feet, she knew her intimidation factor was virtually non-existent, but she had to start somewhere. It was time for her to quit stewing over decisions she could no longer change and instead concentrate on the concrete facts regarding her current situation.

And the fact was there was a flipping cat in her bed! A gigantic feline fiend apparently intent on wrecking what was left of her birthday. Because, yes, there was a cat in her bed, and it was stinkin’ immense. Since when did ordinary cats – even if they were frickin’ panthers - get that big?

The simple answer was they didn’t. EVER.

And an even better question was – Why wasn’t she scared of it?

God knew, it had fangs that promised grim death to anyone that provoked it. Oddly enough, though, she felt not a single ounce of fear or distress standing in front of it. It was like she instinctively knew this animal would never cause her a single second of harm. In fact, the longer she looked into its eyes that glowed in the darkened room, the more convinced she was that the purring beast would do whatever was necessary to protect her. It was like she and the animal had some kind of weird, unspoken connection. It was a bond that she didn’t want and had never asked to share, but one that she couldn’t deny and wouldn’t change even if she could.

How fucked up was that? Maybe this was some kind of voodoo curse one of her disgruntled customers had wished on her when she hadn’t served their coffee quickly enough. Personally, she thought that might be a bit of overkill, but caffeine addicts were serious in Louisiana, and one did not play around when it came to providing quality coffee in the bayou.

“Why couldn’t you be a dog? I could have handled this if you were a dog,” she muttered as she rolled her eyes toward the ceiling and hugged herself. “Especially since I’ve always been a puppy person,” she continued to babble as she shut her eyes and continued chafing her hands up and down her arms as a bizarre electrical charge seemed to ripple through the air inside the tiny bedroom.

“Well, I think it’s safe to say that you are now very much a cat person. Or, at least this cat’s person,” a deep, sexy voice rumbled from the bed. “More specifically, you’re this panther’s person.”

Alexa’s eyes popped open as that rich, deep voice seemed to vibrate through her being. Screaming as she spotted an extremely real -- and from what she could tell (even in the darkness) was an oh, so very naked man in her bed -- she quickly lunged for the nearest makeshift weapon she could find. Sadly for her, the closest missile she could find was only her television remote, and that merely bounced off her interloper’s sculpted chest.

“Ouch!” her prowler growled, batting away the remote as she continued to screech, blindly searching for another weapon in the mostly dark bedroom. “Alexa, chère, settle down!”

Wait a second? Why did her trespasser know her name? And why did that southern drawl sound so familiar? Making a half-turn on her not-so-steady feet, Alexa fumbled for the light switch on the wall, relieved when her searching fingers found what they were looking for. Flicking the switch, she squinted as her unfocused eyes tried to adjust when the room was suddenly flooded with bright, artificial light. Finally able to see a few seconds later, she couldn’t help emitting a small squawk as she saw the nude man lounging in the center of her bed. 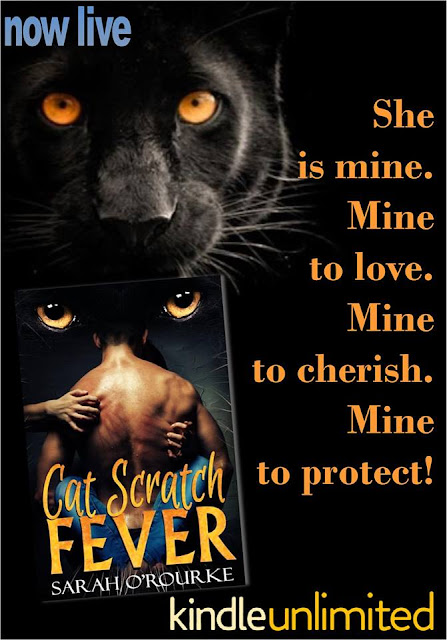 What would you do if you were to walk into your bedroom and saw a black panther laying on your bed? Run away scared or be intrigued and stay.

When Alexa walking to this exact situation there is something about that beautiful panther that keeps her in the room. Maybe it's the eyes that speak to her, but whatever it is she knows this big cat would never hurt her.

Beau has been waiting to claim his mate for several months, but the time has come to make his move. He's not going to let anyone or anything stand in his.

Will Alexa feel the pull to Beau as strong as he feels the pull to her? When a woman from Beau's past tries to scare Alexa away, will she walk away or fight for her man? And if Alexa does walk away, what will Beau do to convince her to stay?

If you want a fast, saucy, sultry read to unwind with at the end of a long day, then Cat Scratch Fever is just want you need.

Sarah O'Rourke brings the readers a story filled with love, humor, sexiness, and heart. The chemistry between Beau and Alexa sizzles right off the pages. What I love most about Beau is that he's so confident that Alexa is his mate that he lets her take the lead of their relationship. He wants her but he doesn't push her. I admire Alexa's courage to take the leap with Beau. She doesn't let her fear of the uncertain keep her away from a love of a lifetime.

I enjoyed Cat Scratch Fever from start to finish and didn't want to let them go in the end. The writing is sultry, enchanting, and satisfying. I highly recommend this naughty little tale to awaiting the kitty in you. 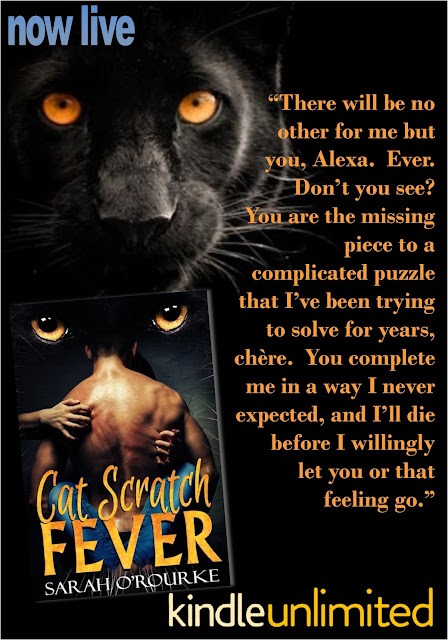 Sarah O’Rourke is actually TWO besties who live three states apart and write at all hours of the day and night! Born and raised in the Southern United States, they are overly attached to their one-click accounts, can’t make it through the day without copious doses of caffeine, and spend way too much time on the phone with each other.

Between them, they have four children and twenty-four years of marriage. They hate empty chocolate wrappers and writer’s block, love to talk to readers . . . and oh, by the way, they write about strong, kick-ass women and hot alpha heroes! 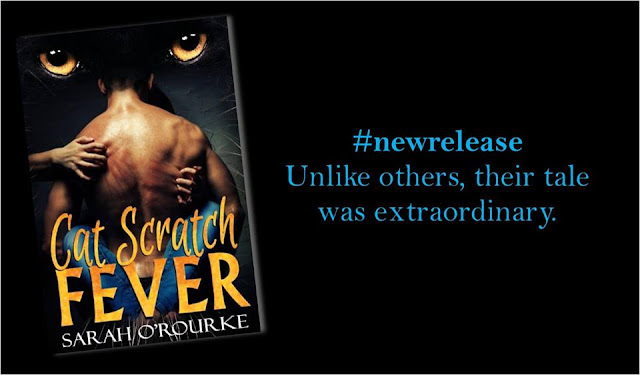 A Creation of Sarah O’Rourke Productions