Blog Tour ~ Where I Found You, Heart's Compass #1, by Brooke O'Brien

How do you protect your heart?

Build a wall.
Lock it away.
Let no one in.

Everyone should have a childhood worth remembering. Only I remember mine for all the wrong reasons. Starting over in a new town is hard enough. When you are running from your past, it doesn't get any easier.

I was ready to say goodbye to the burdens I have carried. The pain I’ve experienced is more than anyone should have to face.

He takes my breath away. I can’t ignore the way he makes me feel. I know he has the power to destroy me.

And that's what scares me the most.

Listen to the Playlist 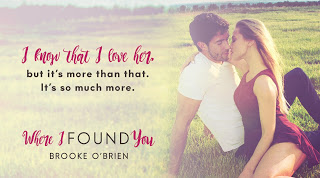 It’s a few minutes after three o’clock when I hear his pick-up truck pull into my driveway. After doing a quick check in the mirror, I open the door to greet Callum.

Once again, there are no words to explain how handsome he looks dressed casually in a black t-shirt, jeans, and his Chucks. Taking a minute, I let my eyes wander over his body. Admiring the way his hair is pulled back beneath his backward baseball cap, how the cotton showcases his incredible chest, and his muscular arms fill out the sleeves as my eyes roam back up to meet his stare.

His eyes are bright with amusement, appreciating how I just blatantly checked him out. He doesn’t even try to hide his smile.

“You ready, sweetheart, or do you need a minute for a second look?” He chuckles.

“I mean, you won’t see me objecting,” I retort, raising my eyebrow as I flash him a smirk of my own. I can tell by the smile on his face he is enjoying our banter just as much as I am.

“As much as I’d love to see that delectable look of desire on your face again, baby, I have plans for you. C’mon!” he says, holding his hand out, ushering me onto the porch as he takes the keys from my hand.

After he safely locks up the house, he takes my hand again and leads me out to his truck. Helping me into the passenger seat, he leans over and secures the seat belt.

After double checking that I’m safely buckled in, he leans back to meet my eyes again. Searching my face, I wait for him to say whatever he so clearly wants to say. My eyes trace along his sharp jaw down to his lips as I peer back up to him, hoping he feels this pull between us and will finally put me out of my misery.

“There will be plenty of that later. Just you fucking wait,” he says as if reading my mind, grunting as he steps back down to the ground and slams the passenger door shut. Letting out a heavy sigh, I follow him as he walks around to the driver’s side and quickly climbs into his seat.

Leaning over, he turns on the radio as he backs out of the driveway. It doesn’t take me long to realize we’re heading out of town. The excitement sets in, wondering where he could be taking me.

“You going to tell me where we’re going or what our plans are when we get there?” I ask, looking over at him.

For a minute, I think he is ignoring me until he looks over at me.  He smiles smugly, and I know without a doubt it’s his way of telling me, “not a chance.”

The song changes to a tune that I know so I turn it up and settle back into the seat with a huff, hearing him chuckle to himself. The lyrics of the song are about a girl teasing a man by making him want her and it spurs something inside me.

Turning my head to Callum, I let my eyes roam over the side of his face, down his chest to the slight bulge in his pants. Seeing how his body reacts to me has me fighting my own arousal. Making the path back up to his face, I can see his jaw clench, resisting the urge to look at me, his eyes focusing hard on the road.

The tension in the cab of the truck has quickly changed. The air charged with the connection between us strong, it’s pulling us together. Resting my elbow on the center console, I lean in closer so we are touching, causing Callum’s arm to tense as I use my index finger of my right hand to trace along the inside of his forearm.

Leaning in closely, I release a slow breath along his jaw until my mouth is just next to his ear.

“You look so sexy driving this truck, Callum,” I whisper softly as I run my tongue along the shell of his ear, nipping softly on his ear lobe. It’s an action so very unlike me, but I can’t hide the way he makes me feel.

Slowly blinking his eyes, I watch for a second as he closes them just before he forces them open as if forgetting where he was. Smothering a smile, I remove my arm from around his, leaning back against my seat.

Grunting to himself, he quickly moves his right hand down to his lap, working to conceal his reaction to me, grumbling, “Just you wait, sweetheart, I’ll get you back for that. Just wait!”

“Where I found You by Brooke O’Brien was emotionally intense, and heart-achingly beautiful! This book left me breathless and wanting more. From start to finish you will have tears in your eyes.” ~ Julia, The Romance Rebels Book Blog

“Brooke O’Brien touches all the bases in her debut novel; romance, angst, laughter, a touch of steam, mystery, intrigue, and a sweet Happily Ever After.” ~ Barb, Goodreads Reviewer

“It’s extraordinary that this is Brooke’s debut novel because if you hadn’t known right from the beginning I would have never expected it. She has a pure talent with words and did an amazing job at developing her characters. Instantly within the first few pages I was hooked and quickly found myself falling in love with Ellie and Callum’s story.” ~ Aurora, Whoo Gives A Hoot Book Blog

Brooke O’Brien is the author of the Heart’s Compass series.

Brooke lives in the Midwest with her high school sweetheart and their three children (both human and furry). Growing up Brooke always had a love of writing; she started out writing poetry when she was young and began journaling her thoughts as she grew older. Diving head first into a good book has always been therapeutic for her. Now her two passions have collided.

Brooke believes that you can cure any bad day with chocolate and a good book. She enjoys spending time with her family, collecting signed paperbacks, going to the movies, and watching basketball and football.

B&B Promotions
Posted by Unknown at 02:00