Book Tour & Giveaway ~ A Doorway Back To Forever: Trust by Nanette O'Neal

Forbidden … and yet. The black vial calls to you. 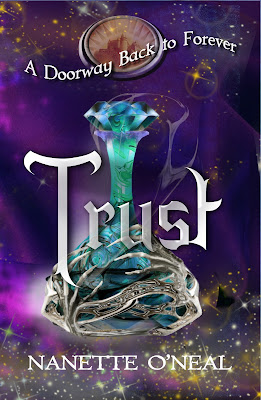 “Mark my word,” Dr. du Monique said, “One third of your team will fall to Midnight—and this black vial will be the cause of it.”

Robyn, Kit, and Cam are called to be on the Elite Skyborn Warrior Team, but the Legend’s prophecy points a guilty finger—three of the nine are destined to turn on the prince. They swear none of them would ever fall, but the vial has a secret, mesmerizing appeal.

While learning to control their powers, their younger siblings, Shirley, Grace, and McCoy, are taught to spy on suspected magic-users and turn them in to the police. When the older kids discover a plot to kill Mr. Fischer, they must use advanced skills they’ve secretly cultivated—skills that could push them over the edge into Midnight.

Will they be the ones to fall to the dark side, or will their younger siblings have them arrested before their mission is complete?

A Doorway Back To Forever: TRUST, is the perfect sequel to BELIEVE. It takes two families on an adventure to Midnight and back that challenges their ability to trust who they are, why they are here, and what they’ve been chosen to do. Do you have the courage to join them?


“Nanette O’Neal spins another great tale of faith, this time asking who can resist temptation—would you pass the test?” Kary Oberbrunner, author of Elixir Project. 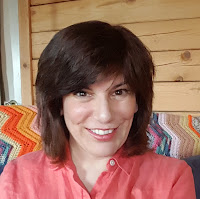 Nanette O’Neal has had a long time passion for the idea behind the Doorway series, stemming from her faith and her love of story.

Her interests have always been strong in various creative endeavors, such as music, martial arts, science fiction, and fantasy. Having studied music in college, she made a career of teaching and directing various ensembles in the public and private fields for years.

When she decided to tackle writing, she began an intense process of study and research in the craft, through the use of text books, online tutorials, chat and critique groups, as well as various workshops, conferences and retreats.

The Doorway series consists of seven novels about faith, courage, and the power within the human soul. She contributes regularly to an inspirational column for a religious website, Ldsblogs.com, and maintains her blog, Nanette O’Neal’s Doorway, found at NanetteONeal.blogspot.com.

Feel free to subscribe to her blog posts and to like her author page. Nanette loves her husband and family, her faith, the mountains, aviation museums, Star Trek, and dogs.

An Interview With Nanette

1. When did you first realize you wanted to be a writer?

It was the magic of story that hooked me—even as a little girl. To read of fantastic worlds, exciting adventures, amazing heroes that rescued the fallen and helped them find their true worth—there is a power inherent in the art of storytelling. Thinking back on my favorite stories as I child, I now realize something—the best of them went beyond storytelling. They spoke of eternal truths about who we are, where we came from, our eternal potential, and how to find our way home. This is no coincidence. I believe good stories come from God, speaking directly to our spirit, to remind us of things we have forgotten. I’ve always wanted to help people find answers to these questions, and the art of storytelling is a marvelous way to do so.

2. If you could tell your younger writing self anything, what would it be?

Dear Younger-Writing-Self: Imagine you’re holding a pitcher of ice water, and a man with parched lips, sunken eyes, who is dying of thirst, crawls over to you with an empty glass. Would you deny him the water because you felt a need to polish the pitcher first? No—you would give him the life-giving water to save him. Your story is like that life-giving water to people who have been looking for spiritual and emotional completeness. It’s not simply a children’s story. It has a message that can awaken people to remember what they’ve forgotten. Someone needs your story to sustain their spirit. Don’t hold it back thinking it’s not good enough.

I think classic fantasies for children that have deeper messages are under appreciated. The Wizard of Oz, Hans Christian Andersen, Charlotte’s Web and a Wrinkle in Time are a few. We may recommend them for children, but we neglect their teaching value. If families would talk more about the eternal messages deep within the pages, more families would be closer.

4. How do you select the names of your characters?

Some of my characters are based on people I know. My next door neighbor for years was a kindly old man named Mr. Fischer. The name Eeberheem is a variation on my maiden name, and the six young children are based loosely on nieces and nephews of mine, although their names are different. McCoy’s name is based on a beloved character from my favorite science fiction series, Star Trek.

5. Do you hide any secrets in your books that only a few people will find?

The question should be, “How many secrets have you hidden!” I have several Star Trek “Easter eggs” in both BELIEVE and TRUST. There are also references to my childhood in BELIEVE that long-time friends of mine might notice (street names, the name of the bakery, etc.) And since the books are allegorical in nature, anyone with a spiritual background can find comfort in whatever eternal message they hear.

“Draw a picture of everything you saw last night in the office—leave nothing out,” Shirley said.

McCoy dropped the cereal from his fist and grabbed the best markers. Shirley and Grace went for the colored pencils. They buried their heads in their paper and didn’t come up for air for a long time.

Finally, Shirley placed her pencil on the floor. She held up her drawing. It was a clear and accurate picture of what she had seen last night—the medallions, the portal of light, the coffin-lid doorway.

She looked over at Grace and McCoy. Grace placed her pencil down and flipped the picture over for Shirley to see. It was as meticulous as hers.

McCoy practically bit through his tongue as he vigorously colored in the final details. He held it up. It was the same as the girls’, except for one very distinct difference.

“Who are they?” Shirley asked. She grabbed the picture from his hand and pointed to the two people McCoy had drawn standing at the office door. His figure drawing was not as sharp as the girls’, but they were definitely two people—male and female, holding swords.

“How should I know?” McCoy asked.

“Well, why are they in your picture then?” Shirley’s voice rose like a distress signal. This was no time for her brother’s artistic pranks.

McCoy snatched his picture back. “Because you said to draw what I saw. And that’s what I saw.”

McCoy clenched his fists and squished his face. “I am serious! I saw them last night!” He thrust his arm out, pointing to the bedroom door. “And there they are again!”

The girls whipped their heads around in time to see a man and a woman—cloaked in white, with swords drawn and held straight to the ceiling in a ready stance—guarding their bedroom door.