From international best-selling author, Jeanne Bannon, comes the story of Jack O’Hurley, a man who's protected his broken heart by running away and refusing to open himself to love. After years of hiding behind any excuse not to let his walls down, he can’t help but be intrigued when he meets the most unusual woman he’s ever set eyes on. Star is certainly not what he’s been looking for but she just might be what he needs.

As Jack begins to fall in love with the eccentric Star, another woman vies for his attention. Torn between the two very different but equalling alluring ladies, he puts into play his tried and true system for determining whether he will continue to date a woman — introducing each to his dog, Phil.

Crazy as it may seem, Jack trusts Phil’s instincts more than he does his own. The only problem is that none have yet to pass the Phil Test.

Jack noticed the fur on Phil’s back stand on end and then it came, the low growl and bared teeth he’d expected. Though Phil would never bite, those who didn’t know her were sure to be petrified by this display.

Denise was no exception. She backed up, plastering herself against the now closed front door. “Is he going to attack me?”

Jack stood between Phil and his date and tried not to smile. “She. Phil’s female.”

Denise just failed what Jack liked to call “The Phil Test” as so many other women had before her.

“She won’t bite. She just doesn’t like you,” Jack said, then turned to Phil, pulling her by the collar a few feet down the entranceway hall. “Go on now. Go to bed, Phil.” He pointed the way, but the dog didn’t move. Her eyes were trained on Denise. She lifted her head and smelled the air, her fur still at attention. Then the dog sneezed and shook her head.

“I don’t think she likes your perfume,” Jack said. “Think we’d better call it a night. This isn’t going to work out.” He opened the door and without a word, Denise fled, fishing her car keys out of her purse as she made her way down his walkway.

Denise was the sixth woman this month alone Phil had sent packing. Jack flipped on the outside light and watched as she got in her car and hoped she wouldn’t drive too fast and end up nose first in one of the dips along the laneway. Once she was out of sight, he locked the door, made his way to the living room, and plopped into his easy chair beside Phil’s bed. Phil turned in a circle and plopped into her own spot, nudging the duvet until it covered her. 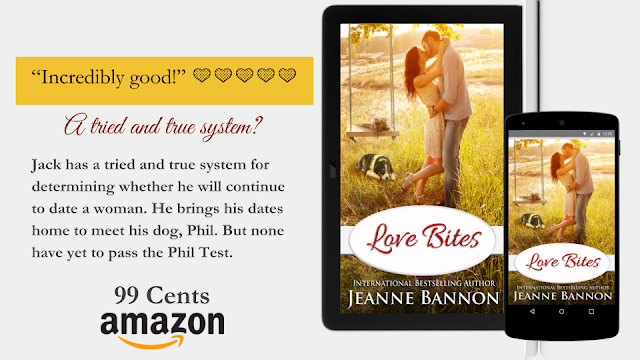 Jeanne Bannon is an internationally best-selling and award-winning author and editor. She lives in Caledon, Ontario, Canada with her husband and two daughters.

Jeanne is giving away PDF copies of three of her books: Love Bites, Lost and Found, and Nowhere to Run. For your chance to win, simply enter via the Rafflecopter below. The contest closes at midnight EST on May 27, 2017, and is open to entrants worldwide.

Underneath the Covers
Book Lovers 4Ever
Books, Dreams, Life