Indulge in the temptation in the breakout series The Hunted by Ivy Smoak.

When Penny Taylor runs into a handsome stranger in a coffee shop, she believes her luck has finally changed. After having her confidence unwound by her ex, she falls hard for a true gentleman. But once she realizes that her crush is her communications professor, her world is turned upside down.

Haunted by dreams of the alluring Professor Hunter, Penny can't seem to dismiss her fantasies and the temptation to have him grows deeper. Will the excitement, danger, and mystery surrounding Professor Hunter bring her to her knees?

This book is intended for mature audiences.

The drizzle turned into rain as I made my way onto Main Street.

"Miss Taylor, is that you?"

My whole body froze at the deep voice. I was wearing the most inappropriate outfit I had ever worn, and now my white tank top was drenched and completely see-through. "Um...no. You have the wrong person." I quickly started walking again, but my high heels prevented me from moving too fast.

I turned around and stared up at Professor Hunter, who was as unbelievably sexy as ever. He was wearing a pair of jeans that hugged him in all the right places, and a leather jacket with a plain white t-shirt beneath it. He looked the same as he did in class, except that he had a 5 o'clockshadow and an umbrella.

"Professor Hunter, I'm sorry..." I let my voice trail off and I folded my arms across my chest to help hide my most likely exposed breasts.

He lowered his eyebrows when I said his name, just like he had in his classroom. "You like to apologize when you've done nothing wrong."

I probably imagined it, but it felt like his eyes lingered for a moment on my legs. He moved toward me so that I'd be under his umbrella with him. "Is everything alright, Penny?"

My eyes were probably red from my angry tears. I was hoping he wouldn't be able to tell in the rain. "I'm fine."

"Then what are you doing out so late all by yourself?"

"I could ask the same of you." I rolled my eyes at myself for being so immature.

"I was just going for a walk."

"Me too," I responded quietly.

He laughed. It was an enticing sound. I drew a little closer to him and let my arm brush against his.

Cold and mortified. I nodded up at him. I liked the way my name rolled off his tongue.

He handed me the umbrella as he slid out of his jacket. Then he held his jacket out for me and I slipped one arm in and then the other. The leather held the scent of his cologne. He took the umbrella and held it above both of us again. He was such a gentleman.

"Well you really shouldn't be out alone this late, Penny," he said. "Especially in those walking clothes."

He laughed again. "Is your dorm near here? It would make me feel much better if I escorted you home."

"This way then," he said, and placed his hand on the small of my back for just a second.

We walked in silence for a few minutes. Every now and then I'd stumble a little in my heels and his hand would briefly touch the small of my back again. Each time he did, I felt like my heart would beat out of my chest.

"I'm not good at giving speeches," I said, finally breaking the silence. "I feel like I should just drop your class."

"I wish you wouldn't. If you ever need extra help, I have open office hours. I really am a fairly easy grader for Comm."

"It's going to be extra painful when you fail me, though."

"Because you...I mean I. Well, you're..." I let my voice trail off. I wanted to say, "Because you're gorgeous and I have a huge crush on you." I can't believe I almost let him hear me say that.

"Well it does seem that you aren't great at giving speeches," he laughed again. "Like I said, you can come by any time."

We walked along the length of the green. I had dreamt of having a date escort me back to my dorm room. But I only dated immature boys, not men. Professor Hunter was a man. I found myself once again wondering how old he was.

"Have you been a professor here for long?"

"Not long at all. I do love it here, despite how much it rains. Besides, you never know what you'll find during a long walk in the rain." He smiled down at me.

Before I knew it, we were at my dorm. I stepped out from under his umbrella and let the rain fall on me again.

"Here," I said and pulled off his jacket.

His eyes drifted for just a second to my wet tank top. "No, you can keep it."

"I've been stealing all your clothes. Soon you'll have nothing left."

"That does seem to be your plan." He had a mischievous look in his eyes.

"I insist," I said as I held out the jacket to him.

He took it reluctantly.

"You're a senior, you're of legal age to drink, and you're allowed to wear what you like. Why would you be in trouble?"

But I wasn't a senior, I was a sophomore. And I wasn't over 21, I was only 19. I took a deep breath. He didn't need to know that. "You're right. And I was only walking, after all. Thank you for escorting me home, Professor Hunter."

He lowered his eyebrows when I said his name, just like he always did. But this time the action made me hold my breath. I was wrong about how he looked. He didn't look angry, his eyes looked hungry. I had to remind myself to keep breathing.

"It's a date." My eyes got huge and I put my hand over my mouth. Had I really just said that out loud? I turned quickly away from him and fumbled with my sensor pass to open the door. Finally it clicked. I threw the door open and quickly went inside. I turned around at the last moment to see Professor Hunter staring at me intently, surprisingly not at all perplexed. The door closed with a thud. 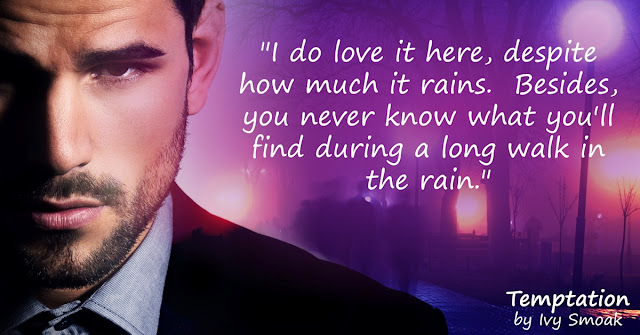 Discover the addiction...find out what happens next in the sequel to The Hunted - Temptation by Ivy Smoak.

Temptation has quickly turned into addiction. Penny Taylor fell hard for the sexy, mysterious, exciting, and dangerous Professor Hunter. But scandalous affairs are meant to go down in flames. Now that he's not speaking to her, she feels numb. And what hurts the most is that he appears to be completely fine. As she struggles to accept that their relationship is really over, her best friend's crude advice is in the back of her mind- the best way to get over someone is to get under someone else.

Will she be able to move on, or is her addiction to her alluring professor only just beginning?

Two and a half years later, Penny and James are living happily in New York City. Their love is stronger than ever. Penny is graduating from NYCU, James is growing his new business, and the two are getting married at the end of the month.

But graduation, starting an internship, and planning a wedding is a lot for Penny to tackle. Especially when mysteries from James' past are clawing at the surface and his scheming ex and unsupportive parents threaten to destroy the happy couple.

Will their own insecurities make them question everything and sway them from the altar?

Tick tock. One day before the wedding of her dreams, Penny is in a city that is no longer her home. Alone. Heartbroken. Lost. Could the past few years really mean so little to a man that became her world? To a man she'd do anything to protect? There is no future without him. There is no her without him.

With only 24 hours until the wedding, is there enough time to repair the damage? Tick tock.

And even if Penny and James do come back to each other, Isabella is still out there plotting. The world is still against them. Darkness still lurks in the shadows of James' past. A student and her professor were never meant to be forever. They thought it was an everlasting love, but it was doomed from the very start. Tick tock.

Temptation led to addiction, which exploded into an eruption of chaos. And when the pieces settled, only one thing became clear...devotion. One great love. A love worth fighting for. Because the only thing that lasts forever is love.

Penny and James defied the odds. A professor and his student were never supposed to become husband and wife, let alone a father and a mother. The couple created a foundation in NYC that is held together with love, family, and friends. A foundation that they believed was impenetrable.

But what happens when the life they know is threatened? If a struggle that should bring them closer together begins to tear them apart? All it takes is - One. Single. Slip. Foundations crumble. Will Penny and James continue to defy the odds? 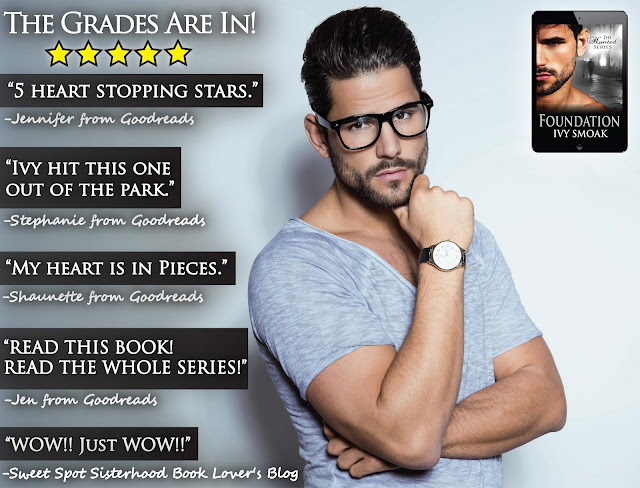 Ivy Smoak is an Amazon bestselling New Adult Romance author. When she's not writing, you can find her binge watching too many TV shows, taking long walks, playing outside, and generally refusing to act like an adult. She lives with her fiancé in Delaware.