It's been a sexy year of quick, filthy, taboo reads, and the final novella is here!

Bedding The Billionaire by London Hale is live! 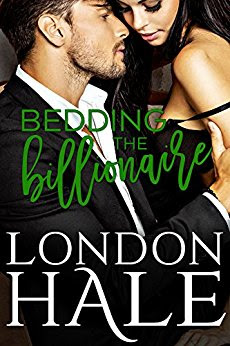 Get your copies exclusively on Amazon

She thinks they’re a mistake

I've spent my whole life working toward my goals, being the best I can be at my job. Arrogant, persistent, pain in the skirt billionaire Colin Huntley isn't going to change that, even if he is the hottest man I've ever had the pleasure of working with. And pleasure is definitely something the man can deliver, without question. Our single, mind blowing night together was a mistake, though. A one-night stand brought on by a lapse in judgment. One I won't make again, so long as I stay strong as he starts his chase. Because when Colin decides he wants something, he gets it. And he's decided he wants me.

He always gets what he wants

Sloane McLaren may be the best VP I’ve ever had, but she taunts me every day in her tight little skirts and her librarian-fantasy glasses. Especially since that night. The one when I had her in my bed, in my shower, bent over my kitchen counter. I thought we were finally on the same page...until I woke up to cold sheets and an empty bed. She may assume it’s business as usual in the office, but I didn’t build my billion-dollar company on assumptions. I want her back in my bed, and I’m willing to play dirty to get her there. 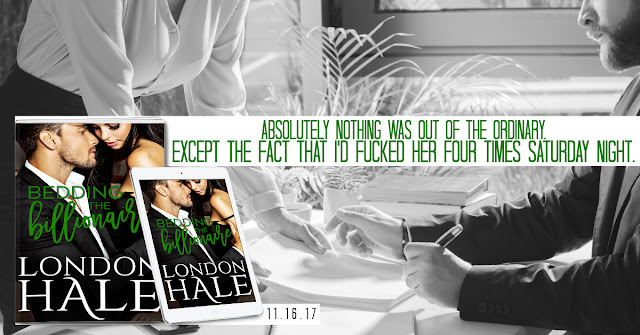 When Sloane McLaren walked into his office Colin Huntley knew she'd get the job done. What he didn't expect was to be so taken by her beauty. Their sexual tension grows leaps and bounds as the days, weeks, and months pass by. Then his opening finally appears and he's her just where he wants her. It's a weekend he won't soon forget.

Sloane has never crossed the line between business and pleasure but when it comes to Colin, she can't seem to help herself. But the harder she tries to push him away the harder to pulls her close.

Just as their relationship is heating up, Sloane makes a mistake that could effect Colin's project. Will she be able to make things right before it's too late? How will Colin react when he finds out? And more importantly, will their new relationship be able to survive?

Bedding the Billionaire is sassy, fun, and off the charts hot. The flames from Colin and Sloane's connection fly off the pages and continue to burn from start to finish.

Colin is a man that is used to getting what he wants and what he wants is Sloane. The lengths he goes to to get her... wow! And all those sweet, dirty words he whispers.... damn!

Sloane is a strong, independent woman that isn't afraid to kick butt when needed. I love how passionate she is about her job but also about her feelings towards Colin both in and out of the bedroom. She's a woman that know how to make her man want her and she does it so well.

But seriously, Bedding The Billionaire is smoking and will require the reader to seek a cold shower once or two while reading this provocative story. London Hale always brings the heat and this a perfect final read for the year from them.

If you only read one London Hale, I highly recommend you make Bedding The Billionaire the one you pick up. But be warned, Colin has the tendency to make panties melt and woman swoon.

London Hale is the combined pen name of writing besties Ellis Leigh and Brighton Walsh. Between them, they’ve published more than thirty books in the contemporary romance, paranormal romance, and romantic suspense genres. Ellis is a USA Today bestselling author who loves coffee, thinks green Skittles are the best, and prefers to stay in every weekend. Brighton is multi-published with Berkley, St. Martin’s Press, and Carina Press. She hates coffee, thinks green Skittles are the work of the devil, and has never heard of a party she didn’t want to attend. Don’t ask how they became such good friends or work so well together—they still haven’t figured it out themselves. 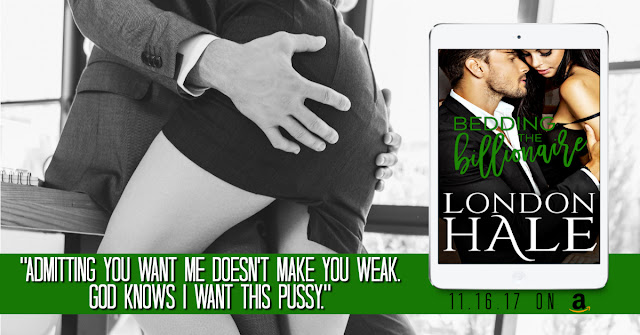