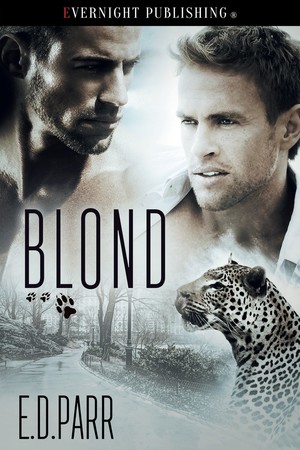 What would you think if the guy you were dating raced off every night before midnight and would never say why? Would you succumb to the urge to follow him one night?

Liam Hale can’t believe his luck when he meets the man of his dreams, Karl Oberon. Hunky Karl is the sexiest man Liam has ever met, but his mysterious disappearances start to tease. 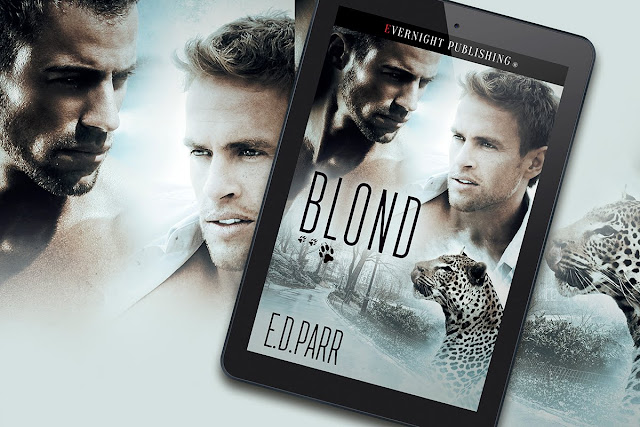 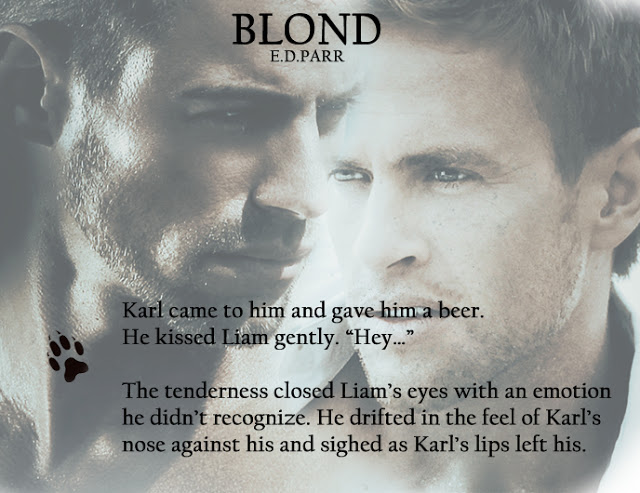 Liam stared at Karl, looking delectable in a black polo shirt that showed off his muscled chest. Waves of emotion took his voice for a moment and then he came to his senses.

Karl passed between Liam and the door. A soft scent of woody cologne drifted over Liam. He gazed appreciatively at Karl, whose chinos fit his muscled backside like a soft glove.

He closed the door. “Go through. The downstairs is open plan.” He followed Karl.

Karl turned as he reached the couch. “Hey, I brought wine and beer.” He held out the bag.

Liam took it. “Thank you, but you didn’t need to bring anything. Can I get you a beer, or something?”

His visitor smiled softly. “I’d like a kiss. I’ve wanted to kiss you again since the last time. I had to hold myself back from it earlier today.”

Liam experienced a surge of desire that tightened his stomach muscles. He brought the paper bag to the kitchen counter and put it down. With his heart thumping, he turned to find Karl immediately behind him. The man’s proximity sent his desire soaring as he gazed into the darkening eyes watching him, expectation shining there.

Karl pushed his arms around Liam’s neck and grazed his lips on Liam’s mouth.

Liam craved the deep melting kisses they’d shared before. He slid his hands around Karl’s hips and grabbed his ass. The move hardened his dick and brought Karl’s mouth down on his in a kiss that made him moan softly as he returned it and thrust the hard column of his cock along Karl’s body.

Karl broke the kiss and smiled against Liam’s mouth. “Fuck, you feel good. I’d like you naked in my arms. I’d like your cock sliding in my ass. I need to fuck badly.”

Liam closed his eyes tight and kissed Karl frantically. His balls were tight and high, his cock just about throbbing, and he pressed onto Karl’s body as his heart raced. “You’re hot as hell. I want it. Fucking hell. Let’s get naked and fuck hard.”

He wrenched away from Karl and dragged his t-shirt off over his head. His breath coming in gasps, his eyelids drooped with lust as he saw Karl pull off his shirt and reveal the perfect abs and flat stomach where his chinos hung low on his hips.

Karl reached for him and drifted cool palms over Liam’s fevered skin.

A shock of sensation leapt to Liam’s cock from the touch, and he groaned. He fumbled at the opening to Karl’s chinos.

Karl put his fingers over Liam’s, and helped, until his huge cock sprang free.

Karl held Liam’s hips. He bit softly on Liam’s bottom lip. “You don’t need to be daring—you’re hot as hell. Do you want to let go of my dick and take off your pants?”

A grin sprang to Liam’s mouth. “Nu-huh—I want your cock leaking on my fingers first.”He pumped Karl’s cock and took kiss after kiss until Karl moaned and thrust spreading pre-cum on Liam’s hand.

“Now I’ll take off my pants.”Liam slipped his hand from Karl’s hard column and pulled away from their kiss.

Karl’s groan rumbled like a growl as he wrenched his chinos down his legs.

Desire tore into Liam afresh at the sight of Karl’s muscled thighs. He pulled off his boots and dragged off his pants and underwear in one. When Liam’s cock bounced away from his stomach, on display and ready for Karl, waves of desire surged through his balls and shot pre-cum from the slit. His stomach clenched tight and between his legs zinged with sensation as his balls lifted high. Liam raised his head from kicking away his clothes, to see Karl naked and watching him at the same time as stroking his huge dick. The head glistened again with pre-cum.

“Who’s fucking whose ass first?”Liam’s voice came out in a whisper as he stepped close to Karl.

Karl traced strangely sharp fingernails along the base of Liam’s tightened stomach.

Tingles traveled down Liam’s thighs, and he groaned in pleasure.

“The condoms are in my bedroom,” he gasped.

Karl’s dark gaze followed Liam’s wave toward the stairs in the open plan room. “Hell, I might not be able to get up the stairs my balls are so tight.” He grinned mischievously.

In his haze of lust, he took Karl seriously and then relief flooded Liam as he recalled the pharmacy bag of condoms and lube he’d thrown in the downstairs half-bath wall cupboard after shopping a couple of weeks ago. His voice throaty he murmured, “Wait. I have stuff down here.” He walked quickly to the small room, his cock extended and his own balls aching. Inside, he practically wrenched the cabinet door open. A plastic bottle of shampoo fell out that he’d stuffed on the shelf alongside other supplies. It made a dull clunk in the hand basin. Liam grabbed the paper bag containing a pack of condoms and sachets of lube. He spun around to race back to Karl.

Karl had followed him and stood in the doorway. He smiled. “I’m desperate. Come here, babe.” 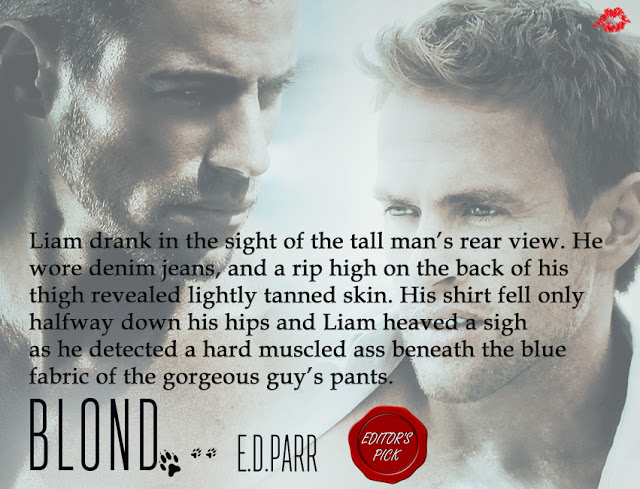 Liam works hard and hasn't had the time to find that special someone to spend his life with. He's had flings here and there but finding the one was put on the back burner.

All that changes when Karl walks into his life.

Liam is immediately taken with Karl's looks, but the more he gets to know him the deeper her falls. But Karl's secret threatens their budding relationship.

So when the truth finally comes to light, will Liam walk away never looking back? Or will Liam accept Karl and all his surprising attributes?

Blond is a quick, intriguing, sexy read that will keep the reader captive from start to finish.

The relationship between Liam and Karl is hot right from the start and only gets hotter the longer they spend together.

Even though Karl is hiding his shifter side, he opens up to Liam about everything else. And Liam is the same way. They are good together in and out of the bed room.

What I love most is how Liam reacted when he comes face to face with Karl's leopard. He can't explain it but just knows he's in no danger.

I would recommend Blond to anyone looking for a quick read that filled with heat, passion, romance, and intrigue with a touch of the paranormal. 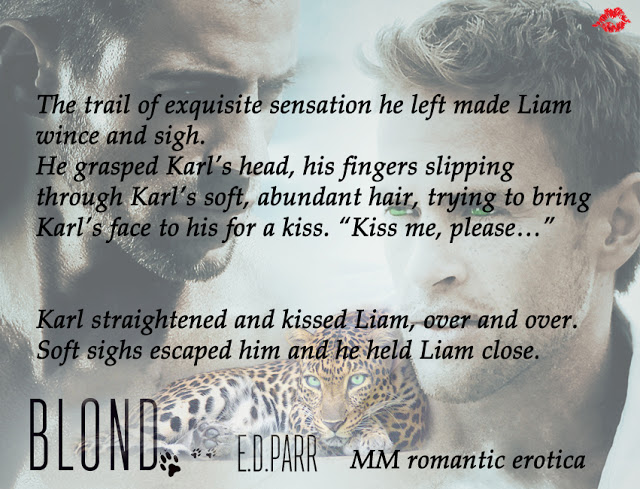 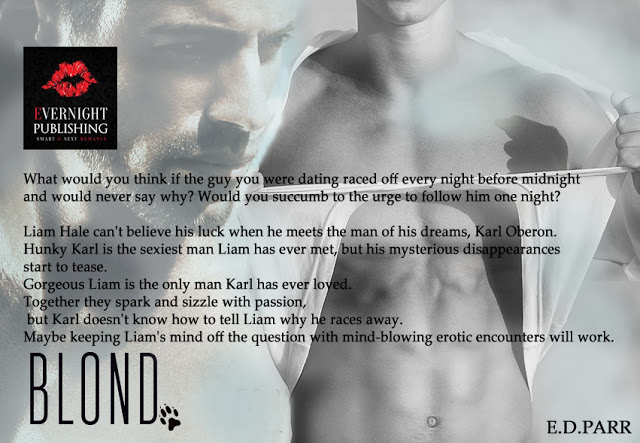