What if the one person who's all wrong for you turns out to be exactly who you need?

Mr. All Wrong by R.C. Stephens is coming December 4th!

Check Out The Sizzling Excerpt

“What’s going on in that pretty little head of yours?” he asks and presses his nose to mine briefly causing my breath to hitch before he pulls away.

“Your suit reminds me that you are the governor,” I say and I know it sounds weird, but somehow in my head on the last few dates, I tried to convince myself that he was just a regular guy.

He chuckles, and again I wish I knew the sound of his laughter. “I’m still the same guy whether I’m in a suit and tie or a pair of jeans,” he replies. I want to tell him that he looks hot as sin in his suit but something tells me that his ego is inflated enough.

“Yes, the governor’s mansion is in Springfield, and I do occupy it in a way, but I hate it there. It’s big and empty. I much prefer my apartment here in the city. Truth is since I met you I’ve been spending more time in Chicago than I have in Springfield,” he says, and his blue eyes blaze as he makes the admission. My chest turns warm and saliva pools in the back of my throat. Fuck! I am so turned on by him.

“Oh,” is the only word I can formulate right now.

He walks toward me at such a slow pace, and I feel like someone has pressed a slow-motion button. I take a large gulp as he closes the distance between us. He pushes a stray strand of hair off my face. “I’ve been thinking about kissing the hell out of you all day,” he says. My knees buckle, at least they feel like they do because the next thing I know his lips are on mine, hot and wanting. He kisses softly at first before his tongue begs entrance into my mouth. His taste is as intoxicating as I remembered. Our lips meshed together in a way that tells me, we fit. This is more than perfect. This kiss is everything. 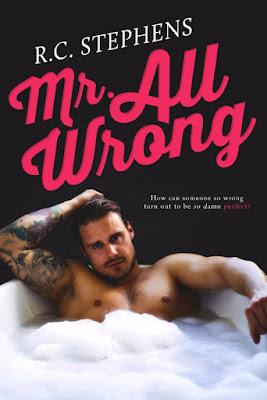 R.C. Stephens was born in Toronto, Canada. She graduated from York University with a master's Degree in Political Science.

R.C. is an avid reader, so when she isn't cooking for her clan or on her laptop writing, she's snuggled tight with her Kindle devouring any romance novel she can. Okay, with the exception of Thursday nights. She makes time for Scandal and Vampire Diaries. She's a fan of drama and suspense but she's also a sucker for a happy ending.

Her husband was her first teenage love. They live together with their three children in Toronto. Loving Canadian winters she could never think of living anywhere else.