Today I am celebrating the release of an incredible holiday set featuring 5 All-New, Never-Before-Published Holiday Romances! This set includes titles by Jennifer Ashley, Erin Quinn, Calista Fox, Mary Leo and Jennifer Probst. You can purchase this set for just .99¢ right now! You won't want to miss these hot romances!

Starlight Bend is a cozy Montana town nestled between glacial lakes and snow-capped mountains. This Christmas, holiday magic is in the air and wishes can come true--all it takes is believing. Visit us in Starlight Bend and meet five sexy, heartwarming heroes and the women who steal their hearts...

Haley McKee is furious to find herself stuck in the tiny town of Starlight Bend so near Christmas, helped out by the handsome Maddox Campbell, a cowboy who's not impressed with her fancy job titles and parents' money. In fact, no one has given her this much crap her entire life. But there's a lot more to Maddox than at first seems--he's a hard-working man who gives much of his time and patience to help those who have little. When a spark of Christmas magic promises Haley all she wants, will she make her wish with her head or her heart?

Kari has big plans that are about to pay off, and she doesn’t have time for tall, dark, and amazing Ty Timberlake. Ty knows he’s in trouble as soon as he meets smart, beautiful Kari. He understands her goals, but knows the rat race won’t make her happy. Kari is hell-bent on making her mark and moving onto the next challenge; Ty is determined to win her love and make her stay. As Christmas approaches, Kari begins to question what she wants. Should she stick to her plan and be long gone by the New Year, or choose the man who’s stolen her heart?

Anna Voss and Nick Hoffman are Starlight Bend’s star-crossed lovers. They were inseparable growing up, but destined for different paths. They haven’t seen each other in over a decade, but this Christmas, Nick returns home—with some startling surprises that turn Anna’s world upside down.

Love and desire have always burned bright between these two, but they’re both haunted by the past. Yet there’s a mystical entity working in their favor this time around—if they can open their hearts and minds to a destiny rewritten, with the help of family and a little holiday magic…

Jolie Shepherd didn’t want to spend Christmas alone. So when she accepts an open invitation for a visit to Starlight Bend, Montana from her best friend, Jolie expects to pass most of the holiday season holed up inside a rustic cabin, not playing cowgirl with quite possibly the most adorable cowboy in the entire state. Red Weisman is a man who prefers to ride alone . . . that is until he meets Jolie Shepherd. Once they team up to grant a Christmas wish for a needy child, something magical happens between them. Now all they have to do is believe . . . but can they?

Noah used to be a beloved member of the Starlight Bend community, until a tragedy turns to betrayal and drives him into solitude. His face horribly scarred, he retreats to his mountain top mansion—until a stubborn social worker asks for a Christmas wish to help a sick child. He never expects to fall for the spitfire, do-gooder, but when she offers love as the solution, can he let go of the past? When Josephine convinces Noah to host a Winter Carnival, she’s intrigued by the fascinating man hiding a bruised heart. But will her love be enough for him to take a chance on a brand new future?

Read an Excerpt From Snowbound In Starlight Bent by Jennifer Ashley

Two huge hands covered with leather landed on her driver’s side window. Haley stared in frozen shock as they slowly slid down the glass.

They were a giant’s hands, likely belonging to whatever crazy man lived in the middle of nowhere alone, waiting for city girls like her to blunder into snow banks. He’d haul her out of the car and drag her into this silent landscape, never to be seen again.

The hands returned to scrape off another layer of snow. Then a head, covered except for its eyeballs, bent to peer inside her car. Haley shrieked.

The gloves dragged a wool scarf away from the man’s nose and mouth, and his words came to her through the thick glass.

“What the hell are you screaming for?”

Haley’s cry died away. The man who looked through the cleared snow had a hard face tanned from sun and wind, and very blue eyes. He had dark hair and was far younger than the madman she’d expected, his features attractive in an outdoorsy way.

She sat up in her seat, pushing her hair back from her face. “Who are you?”

The man grinned, which lit up his eyes and made him all kinds of handsome. 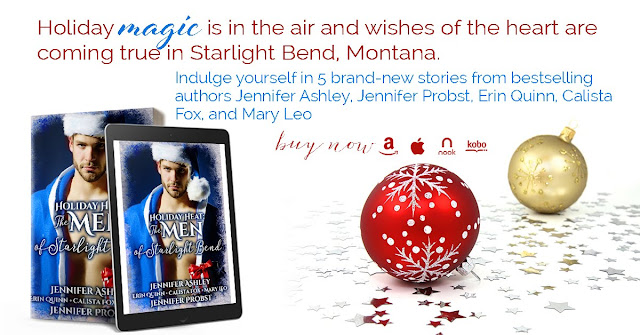