Harmony in Laguna
by Bogna Maslanka

Allison Shaw swore she’d never let a man distract her again. Stuck living with her gossip queen of a mother after a bitter divorce from her high school sweetheart, Allison is ready to forge a path by herself. Life decides to throw a wrench in her plans when a night out with an old friend turns steamy.

Benjamin Diaz’s life is just the way he likes it; quiet. But it hasn’t always been that way. After his mothers Alzheimer’s diagnosis threatened to change everything, Benjamin worked hard to return balance to his life. But a chance encounter with a high school crush threatens to change everything. 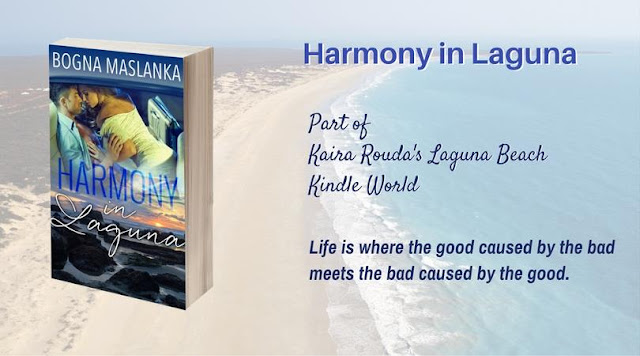 Hidden in Laguna
by Cheryl Phipps

Ballet dancer, Tania Patterson had the world at her feet until a terrible accident destroyed her career. Alone and devastated, after her boyfriend deserts her, she finds her way to Laguna beach, determined to start a new life as a wedding planner.

Braden Dorn was once a sought after piano player. Everyone wanted a piece of him, especially his grasping step-father, and then his world shattered. Now he must pick up the pieces of his life and start again.

For two wounded souls, love might be too much to ask when hearts have been shattered, and self-protection means everything.

‘The one’ can sometimes be hidden in plain sight. 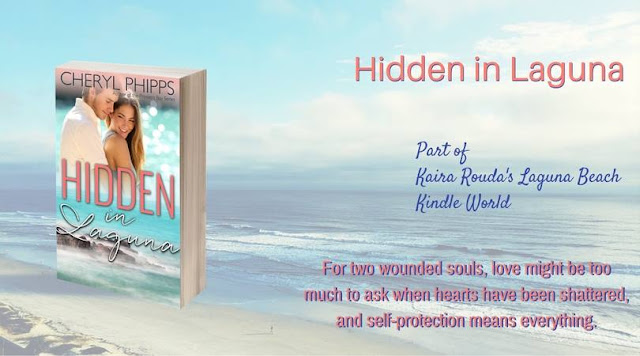 That Gold in Laguna
by Heather Hiestand

Treasure hunter Thor Erickson stars in California Gold, a reality TV show. An outdoors buff, he wants to dig for buried gems in the wilderness, not in a rich girl’s Laguna Beach backyard.

Rachel McHughes is an art expert looking for a new challenge. She wants her wealthy father to sell his property so she can leave her job curating the family art collection and take a fulfilling museum position.

The California Gold producers insist the hunt for missing Hollywood Golden Age jewels is good television. The show must go on despite friction between the cast and the McHughes family.

Thor and Rachel can’t avoid each other, or the incredible, sexy chemistry they generate. The treasure they discover might not be gold, but each other. 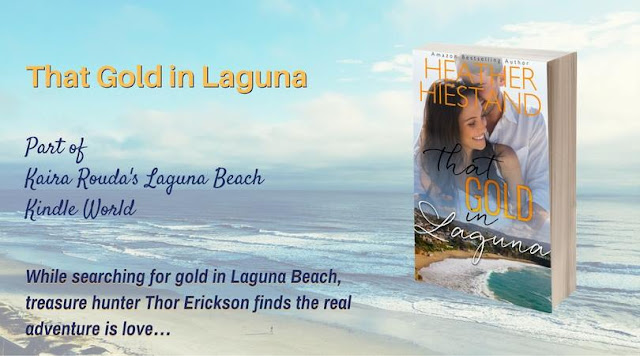 Jake Cooper has built homes for families in Laguna Beach for years, watching other’s make their dreams comes true. Now it’s his turn to settle down, or so he thought. When his long-time girlfriend breaks up with him, he’s left with the perfect family home, just without the family.

Erin Johnson grew up with very few possessions, the glamorous lives of her high school classmates out of reach. Right as she prepared to start her life, a family tragedy forces her to derail her plans. Ten years later, with her college diploma in hand, Erin’s ready for adventure and freedom from responsibility.

When she meets Jake, she questions everything she thought she wanted.

Is it possible to build new dreams when the right person comes along? 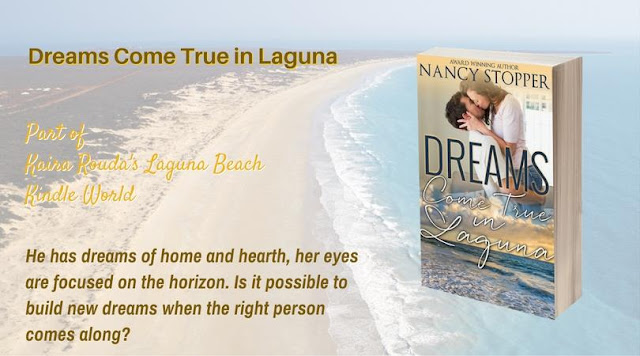 Wed by a Seal in Laguna
by Zoe York

Julie Collins fell hard and fast for Lt. Jason Steyner, but actually marrying the guy is proving easier said than done. First the winery they’d picked in Napa burned down, then his next tour of duty got moved up. Now they have four weeks to find a new venue, tell everyone about the change of plans—and oh yeah, get married.

A whirlwind trip to Laguna Beach gets the wedding plans back on track, and gives the Navy SEAL and his flight attendant fiancé a much-needed weekend away from the chaos of work and planning. The countdown is on. One month to go until Julie is wed by the SEAL…

The countdown is on to the first day of the rest of their lives! A SEALs Undone reunion story. 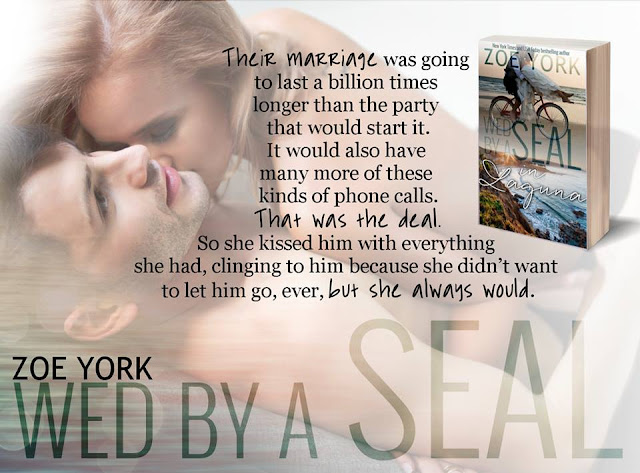 Excerpt From Dreams Come True in Laguna by Nancy Stopper 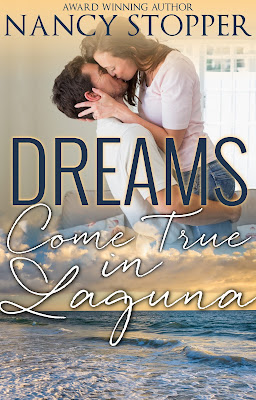 They walked for a long time, talking about nothing and everything. Her voice rang with joy when she talked about getting her degree, and sadness laced her words when she spoke about her family. She had taken on so much so young, and he admired the hell out of her. She was committed to her family. Something important to him, too. And his first priority when looking for a woman.

He wanted to know about her dreams for the future. He opened his mouth but closed it again because they’d reached an outcropping of rocks at the base of the large, majestic cliffs jutting out into the ocean. This was the end of the walk. But he wasn’t ready to go back, because he wasn’t ready for his night with Erin to end.

He took a chance, hoping she felt the same. He shifted with his back to the cliffs and leaned against the rock, pulling her to him. She came willingly.

He cupped her cheeks with his hands, his mouth only a breath away from hers. Tilting his head, he closed the distance between them and slid his mouth over hers. She kissed him back, her lips soft beneath his. He pulled back, skimmed her upper lip and then her lower before taking her mouth again. Give and take, push and pull, they kissed each other, the kiss sweet and sensual at the same time. He ran his tongue along her closed mouth, asking for entry. She hesitated a moment, and then opened to him.

He took full advantage and plunged his tongue in, swept around and tangled with hers The flavor of sour lime, sweet cranberries and something uniquely Erin burst on his tongue. The sound of the waves crashing on the rocks faded away and it was only the two of them, alone in this dark corner of the world.

He slid his fingers into her long hair, the silky strands caressed his hands. And then he made love to her mouth the way he wanted to make love to her body. Slow and languid, fast and frenzied. Erin responded, her hands stroked up his arms and clung to his shoulders, her fingers digging in his back muscles. She leaned into him, her warm body pressing into his. He felt her hard nipples against his chest, her body heaving against his. His erection thickened, pressing against his jeans. He nudged his crotch against her, showing her exactly what she did to him. 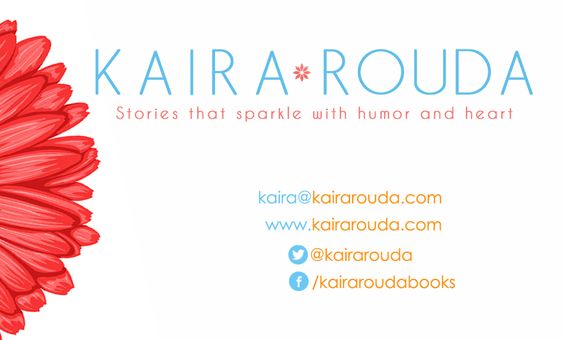 Kaira Rouda is a USA Today bestselling, multiple award-winning author of contemporary women's fiction and sexy modern romance novels that sparkle with humor and heart. Her women's fiction titles include Here, Home, Hope, All the Difference and In the Mirror. Her bestselling short story is titled, A Mother's Day. Kaira's work has won the Indie Excellence Award, USA Book Awards, the Reader's Choice Awards and honorable mention in the Writer's Digest International Book Awards. Her books have been widely reviewed and featured in leading magazines.

Her sexy contemporary romance series set on Indigo Island includes: Weekend with the Tycoon, Book 1; Her Forbidden Love, Book 2; The Trouble with Christmas, Book 3; and The Billionaire's Bid, Book 4. Each of these novellas can be read as a stand alone, or enjoyed as a series. Her new series is set in Laguna Beach and includes: Laguna Nights, Book 1; LAguna Heights, Book 2; and Laguna Lights, Book 3 coming winter 2015. She also helped launch Melissa Foster's The Remington's Kindle World with her bestselling novella, Spotlight on Love, and is part of Carly Phillips Dare to Love Kindle World with The Celebrity Dare.

She lives in Southern California with her husband and four almost-grown kids, and is at work on her next novel. Connect with her on Twitter, Facebook at Kaira Rouda Books and on her website, KairaRouda.com.