Book Blitz & Giveaway ~ All the Way to Shore by CJane Elliott

Jonathan Vallen has never felt good enough. A gentle musician who loves to garden, he’s woefully unsuited to running Vallen Industries, the family business. When his father hires a hotshot executive, Marco Pellegrini, to save the company, Jonathan moves away and leaves his humiliation behind. A year later and forty pounds lighter, Jonathan runs into Marco on an LGBT cruise. Marco doesn’t recognize him, the sparks fly, and Jonathan pretends to be someone else for the week—Jonah Rutledge—someone good enough to be loved.

Marco Pellegrini has always been driven. He rose from poverty to the pinnacle of business success, and he’ll do anything to protect his reputation—including hiding his bisexuality. Having saved Vallen Industries, he’s weary of the rat race and ready for a more meaningful life. When Marco meets his soul mate for that new life—Jonah Rutledge—on an LGBT cruise, he prepares to stop hiding and start living.

Back on land, the romance crashes when Marco discovers his perfect man is not only a lie but the son of his boss, Frederick Vallen. Jonathan resolves to win Marco back, but Frederick takes vengeful action. Jonathan and Marco must battle their own fears as well as Frederick’s challenge to get to the future that awaits them on the horizon. 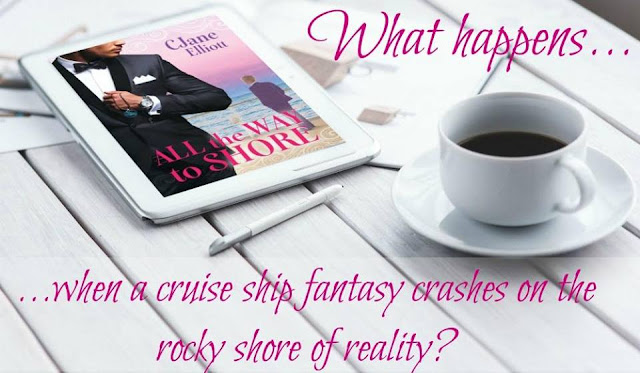 Jonathan eyed the moon and waited for Marco, who was getting something from the bar to bring back with them to his stateroom. He smiled up at the stars, heart full, ready to ride the wave of this fairy tale all the way to shore. Then a hand caressed his neck, and he turned to smile at his handsome prince. Marco smiled back, his pendant glimmering on his chest and a bottle in his hand.

“I thought it’d be nice for an after-dinner drink as we listen to Debussy.”

They strolled along the deck. “We are almost too fancy for words.”

Marco chuckled. “I’ve never been accused of being fancy before.”

Jonathan eyed him, tall and elegant with his black curls and Roman nose. “You seem fancy to me. Or, well, sophisticated is more like it.”

“If only Mama could hear you. She’d know her bambino had made it in the world.”

Jonathan followed Marco into his stateroom, letting his Jonah Persona take the lead lest he pass out from sheer nervousness. “Nice digs.” Digs? Where’d that come from?

“Thanks.” Marco picked up a large envelope that had been shoved under the door, glanced at the front of it, and tossed it to join a pile of others on the desk. “Work faxes. They don’t seem to get I’m on vacation in the middle of the ocean. They can wait.”

A shiver took hold of Jonathan, thinking of Father and how totally like him it was to be bugging his CEO in the middle of his vacation.

“You aren’t cold, are you?” Marco asked.

“Oh, okay. Good. Let me get the Debussy up on my iPod. They have a docking station with pretty decent speakers in here.” Marco sounded a little nervous himself.

As Marco fiddled with the iPod, Jonathan opened the Courvoisier and poured each of them a moderate amount, thinking they could both use some loosening up. “Do you want yours over ice?”

Marco turned. “No. That’s okay. There should still be some ice in the bucket if you like it that way. Here we go.” He pushed a button and Debussy’s La Mer started to play.

They sat in two armchairs at one end of the large room, listening to Debussy’s sensual and passionate music while sipping the brandy. The music swelled and crashed down in eerie imitation of the ocean all around them. With the curtains drawn back, they stared out at the real thing, moonlight dappling the midnight waves. Everything about this moment was surreal—a beautiful dream.

After a time, Marco set down his glass, his eyes burning into Jonathan’s. Jonathan gulped down the rest of his drink for courage and put his glass next to Marco’s. Marco held out his hand, and they rose from their chairs. As Jonathan followed Marco to the bed, his palms grew clammy and his heart raced so much he thought he might pass out. Now that his Jonah Persona had been successful in luring Marco to bed, performance anxiety crowded out everything else. God. It had been so long since he’d had sex. Did he even know what he was doing? Anthony’s voice chimed in on the proceedings. Relax, doll! It’s just like riding a bicycle. You never forget. Now, hop on that man and ride!

After years of hearing characters chatting away in her head, CJane Elliott finally decided to put them on paper and hasn’t looked back since. A psychotherapist by training, CJane enjoys writing sexy, passionate stories that also explore the human psyche. CJane has traveled all over North America for work and her characters are travelers, too, traveling down into their own depths to find what they need to get to the happy ending.

CJane is an ardent supporter of LGBTQ equality and is particularly fond of coming out stories.

In her spare time, CJane can be found dancing, listening to music, or watching old movies. Her husband and son support her writing habit by staying out of the way when they see her hunched over, staring intensely at her laptop.

Giveaway
One lucky winner will receive an ebook of their chose from CJane's backlist.