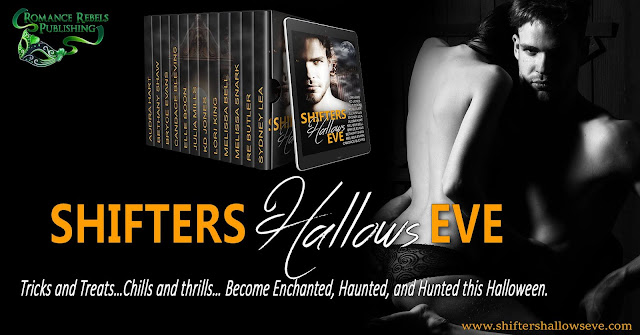 “A box set full of women with grit and the sexy, alpha men who love them.” – A One-Click Book Addict

“Each one was different and completely unique. They were all very captivating..” – Marie’s Tempting Reads

“Not only did I enjoy the twelve stories that this boxset includes, but I found twelve new authors!” – Once Upon An Alpha

Featuring:
Joker's Trick or Treat by: Audra Hart
The Wolf's Ghost by: Bethany Shaw
The Haunted Mate by: Bryce Evans
Hallowed Destiny by: Candace Blevins
Dark Lovers by: Elle Boon
Tears For Her Dragon by: Julia Mills
Once Upon A Hallow's Eve by KD Jones
Haunted By Love by Lori King
The Valley of Shadows by: Melissa Bell
Hunter's Mark by: Melissa Snark
The Tiger's Bride by: R.E. Butler
Mate Hunt by Sydney Lea

As All Hallows Eve approaches, the veil between realms wavers, tempting many magickal beings to seek dominion over mortals. However, there are those who watch over mankind. The Twin Ravens Outlaw MC are one such group of protectors. Joker, a former slave turned blood wolf, a guardian who relives the pain and heartache of losing Jenniene, the only woman he ever loved, every year as All Hallows approaches. Until the night when the lover he long believed dead walks through the door of the MC with enemies in tow. Will the return of the mysterious Jenniene be Joker’s Trick, or Treat? 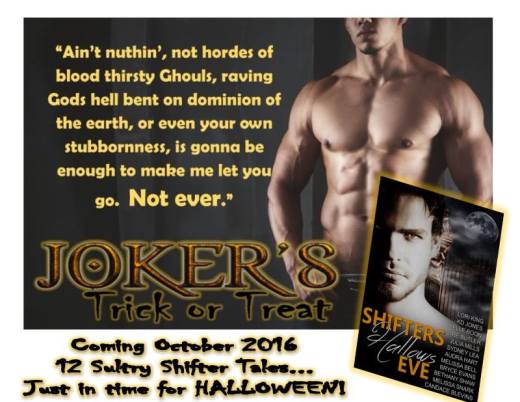 The Wolf’s Ghost
By: Bethany Shaw

Jace has spent his long, werewolf life searching for his true mate. He never expected to run into her while on the run from a malicious pack. Now all he has to do is keep her safe, evade the bloodthirsty wolves, and convince her that they are fated mates.

Trapped inside her home for decades, Eva is determined to set herself free of her prison this All Hallows Eve. That is, until a wolf crashes into her library through the window. Eva feels compelled to help the handsome stranger, especially when she learns they share a common enemy, but will helping him cost her the one time a year she has to break the spell? 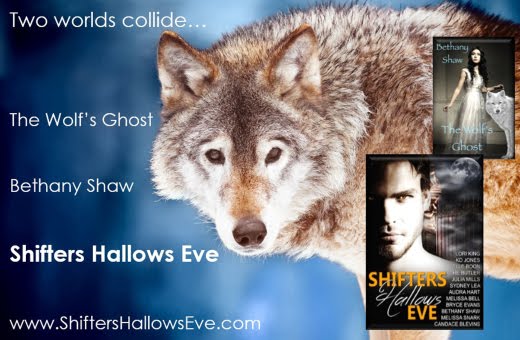 The Haunted Mate
By: Bryce Evans

With her world blowing up around her, Bloom Scott is feeling lost. She has no job, family, or future…until a strange letter arrives from a place called Mystery. Could she really be the beneficiary of a will from a grandmother she’s never known?

Freeman Butler has no desire to share his family’s legacy with a woman he’s never met; much less a human who doesn’t know anything about shifters. Surviving a year without giving in to his desire for the sweet smelling Bloom, will be anything but easy, but he’s determined to keep what’s his.

Surrounded by strange people, who believe in strange things, and spirits that seem to have it in for her, Bloom might just lose her mind before the year is up. 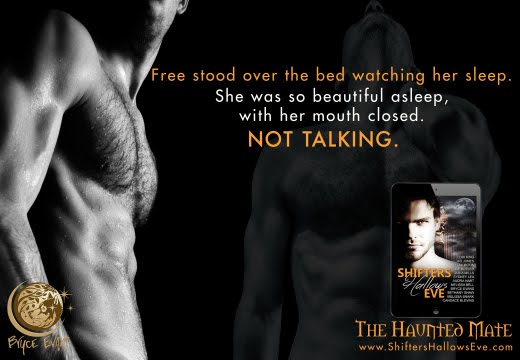 A year ago, Destiny was abducted by sick demon worshipers who intended to use her as a human sacrifice. They’d already carved evil-looking symbols all over her body when she somehow managed to escape.

Tonight is Halloween — the one-year anniversary of her abduction — and she’s determined to return to the woods where she nearly lost her life. She doesn’t expect to see a white lion waiting for her.

Aren’t black cats supposed to be bad luck? Perhaps a white lion will be the opposite of evil. Or, maybe she’s finally lost her mind, because lions are not indigenous to Georgia. 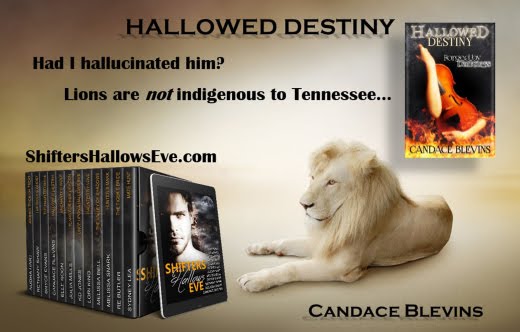 Raina wanted what every female did…

The only daughter of the vampire king, and a shifter, Raina had everything she could ever want, except the HeartsLove she craved. When Satan kidnaps her to be his consort she comes face-to-face with the possibility of never finding it.

Creed was equal parts good and bad…The son of Satan and an angel, he lives a life filled with death and battle, excelling at each. Until he found his Chosen in his father’s chamber.

What would you do to save those you love? Creed will give up his soul in order to save Raina. She realizes he’s her other half and can’t live without him. Will they both be willing to sacrifice for the other 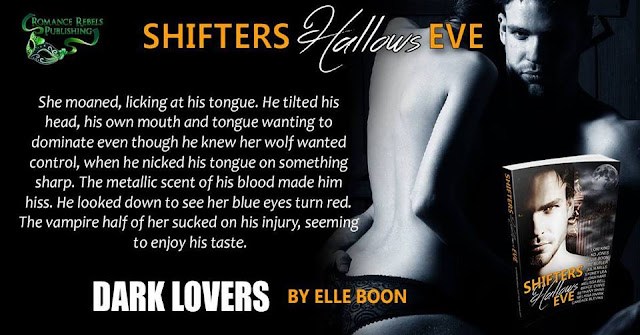 Tears for Her Dragon
By: Julia Mills

Escaped from hell on earth, lost and alone, a wail in the night calls to not only his beast but also his heart. Finding this tortured woman is all that matters.

On the run, hiding in plain sight, the icy fingers of doom invade her soul. The pull of the world she fled tears at the fiber of her being.

Lovers from different worlds, fighting a common enemy, thrown together by the Reaper himself, helpless but to do as he bids.

Can these two souls find peace when the Devil himself is demanding his due? 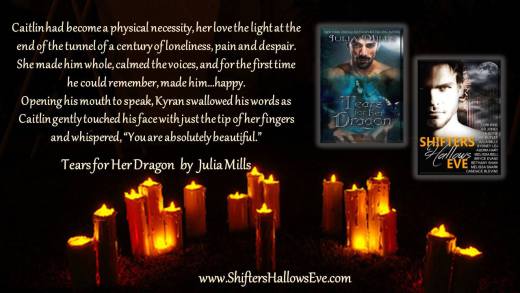 Once Upon A Hallows Eve
By: KD Jones

Halloween is the busiest time of year for Rita Russell and her little shop. Then Luke Conrad shows up and thwarts her happiness. She’s refuses to let him ruin everything she worked for.

Luke Conrad is the alpha of the local werewolf pack and has to track a murderer while keeping their secret safe from the humans. Standing in his way is a curvy spitfire shop owner who his wolf wants to claim, and she happens to be his number one suspect.

Nothing will ever be the same for these two when the pack runs . . . once upon a Hallow’s Eve. 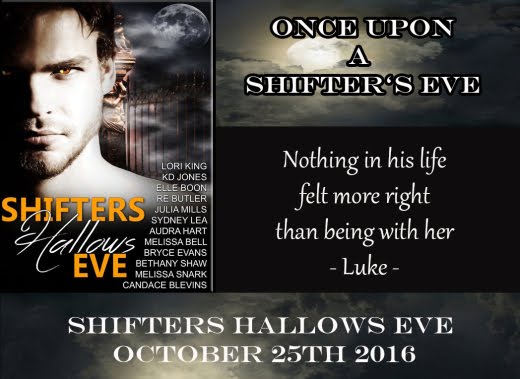 Haunted By Love
By: Lori King

It was the dare to end all dares, and she didn’t have the option of backing down. Spend Halloween night in the haunted castle in the forest. She figured it would be easy enough; after all, she didn’t believe in ghosts.

A hundred years trapped in an inescapable hell had twisted his heart into a black rock of despair and loathing for everything human. Many had tested his limits over the centuries, but none had reached into his soul the way she did.

To overcome, he was to reach her, but she doesn’t believe. Will they both spend the rest of eternity haunted by love? 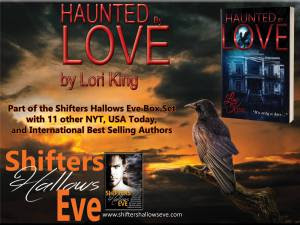 The Valley of Shadows
By: Melissa Bell

Steeped in centuries of tradition and in accordance with the Laws of Lupine. When the daughter of an Alpha comes of age, she stands before her pack as the prized female. Held in the Valley of Shadows, on All Hallows Eve is a twisted game of survival. Only the eldest unmated son of the Alpha’s may compete for if they fail it means they are dead. It is part of an ancient ceremony one that will bring packs together from far and wide. It’s an honor to be chosen to run the gauntlet, and a disgrace not to accept.

ER nurse Victoria Storm anticipates a joyous Winter Nights ceremony with her wolf-shifter pack, but a determined hunter upsets all her plans. Daniel Barrett wants her help because he suspects a ghost is behind his friend’s disappearance. As a pagan priestess and spirit-speaker, she can discover things he can’t. He’s as sexy as he is persistent–she finds him impossible to refuse. Throw in a trip to a remote Arizona town, a haunted hotel, and a lost gold mine, and their evening is about to get interesting. 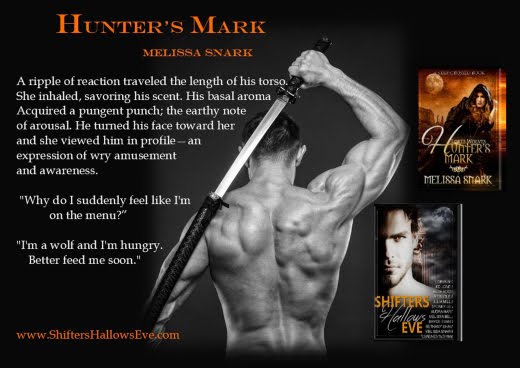 As the last golden-furred tiger shifter in existence, Charisma knows that the only opportunity he has to find his soulmate is to wait for the All Hallows Eve full moon. With an enchanted medallion in hand, Charisma casts the spell for his soulmate, hoping that the necklace will find the one woman meant to be his. Unless he finds his other half, his beast will slowly take over and he’ll go feral. What he doesn’t expect is interference from the very Wiccan who helped him, and for his soulmate’s life to be on the line. When Eva finally returned home she had three goals. Find a place of her own, get settled into her new job…and avoid Jackson Hollinger at all costs. Little did she know that the man in question had very different plans for her.

When a rogue wolf kidnaps the alpha’s new mate and sends a human hunting party in Eva’s direction on the eve of her first shift, it’s up to Jackson to make sure he finds her first. Will Jackson get there in time?

It’s Halloween, and it’s time for a mate hunt. 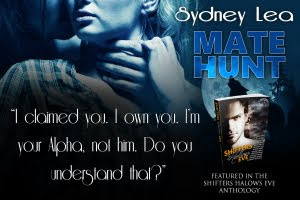