Sneak Peek ~ Dear Bridget, I Want You by Penelope Ward and Vi Keeland 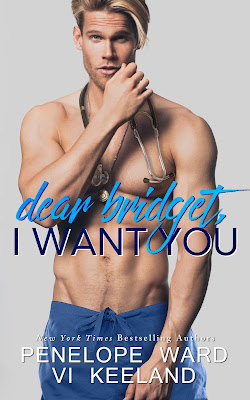 I’m writing this letter because it’s highly doubtful I’ll ever garner the courage to say this to your face.

We’re totally wrong for each other. You’re the proper single mum with a good head on your shoulders. I’m just the carefree British doctor passing through town and temporarily living in your converted garage until I head back to England.

But here’s the thing… for some bloody reason, I can’t stop thinking about you in very inappropriate ways.

The only reason I’m even admitting all of this to you right now is because I don’t believe it’s one-sided. I notice your eyes when you look at me, too. And as crass as I appear when we’re joking around about sex, my attraction to you is not a joke.

So, what’s the purpose of this note? I guess it’s a reminder that we’re adults, that sex is healthy and natural, and that you can find me just through the door past the kitchen. More specifically, it’s to let you know that I’m leaving said door cracked open from now on in case you’d like to visit me in the middle of the night sometime.

It’s doubtful I’ll even end up sliding this letter under your door anyway.

Dear Bridget, I Want You will be available on all platforms on September 18th!

There is no Amazon eBook preorder. Will go live on Amazon on release day.
Sign up for mailing list now and be the first one notified when it goes live

Every time I considered leaving my room, I would grab the framed picture of Ben and stare at it. The urge to go to Simon was so strong; I basically hadn’t put down the framed photo of my deceased husband in an hour. I was lying in my bed, holding a picture of a dead man while fantasizing about one who was very much alive and in the other room. With the door cracked open waiting for me. There was one part of Simon’s note that I just kept reading over and over.


I want to make you come. Hard. I want you to get lost in me and I want to hear you say my name over and over while we fuck.


I was pretty sure that Ben had never used the word fuck like that before. Did we even fuck? We made love, sure. Our sex life was normal—at least, I think it was normal. Don’t get me wrong, the passion wasn’t the same as when we first got together. But after ten years, both of us working full time and raising a child, it was normal to have some of the desire dwindle, wasn’t it?


I looked at the picture of my husband and sighed. We didn’t fuck. Not even in the beginning. And I felt guilty for that now. Maybe we should have been fucking. I certainly didn’t do anything to entice him to want me the last few years. Was it my fault our sex life had gotten boring? I rested the picture of Ben over my heart and laid my hand over it. I could feel my heart beating out of control beneath my fingers.


Shutting my eyes, I tried to force thoughts of Simon from my mind. But it was no use. Visions of his hard, sculpted body hovering over me had infiltrated my brain. So, here I was, a thirty-three-year-old, single mother lying in my bed all alone with a picture of my dead husband held to my heart while I visualized fucking another man.


I needed my head examined.


After two hours and no sleep in sight, I decided the only way I was going to be able to get any rest was if I got everything I was feeling off of my chest. Flicking on the light, I carefully set the framed photo of my beloved Ben on my nightstand and then opened the drawer and dug out a pen and piece of pretty stationery. I would write down my thoughts to clear my mind. I had no intention of actually giving the letter to Simon, so there was no reason to filter anything I said.


We hope you enjoyed this preview!

Penelope Ward is a New York Times, USA Today, and #1 Wall Street Journal Bestselling author of thirteen novels. With over a million books sold, her titles have placed on the New York Times Bestseller list seventeen times. She is the proud mother of a beautiful 12-year-old girl with autism (the inspiration for the character Callie in Gemini) and a 10-year-old boy. Penelope, her husband, and kids reside in Rhode Island.

Vi Keeland is a #1 New York Times Bestselling author. With more than a million and a half books sold, her titles have appeared in over eighty Bestseller lists and are currently translated in seventeen languages. She lives in New York with her husband and their three children where she is living out her own happily ever after with the boy she met at age six.