Tempting the Domme by Golden Angel is available now!

Come and meet the Domme of Stronghold...

It takes a strong man to win the heart of an even stronger woman.

Luke Evans is a confident, commanding man who happens to really like a bossy woman in the bedroom, so it's no surprise when he's immediately drawn to Stronghold's bossiest Domme, Olivia Williams. Unfortunately for him, while he's just Olivia's type in a lot of ways, she's not happy that he's in a position of professional power over her, a decision she was not privy to when it was made. She's determined not to mix business with pleasure, no matter how appealing putting Luke Evans on his knees in front of her would be. But Luke's just as much a go-getter as Olivia and he's perfectly happy to join the class of new submissives in order to show her just how far he's willing to go.

When it becomes clear Olivia has attracted the attention of someone else - and not in a good way - the tension among the entire Stronghold group goes through the roof and Luke can't help but feel protective no matter how Olivia resists him.

With two strong personalities both used to winning, who will come out on top in the end?

Seeing the desire flaring in his eyes as she stripped down, taking her time to shuck off her shirt and pants, then her matching lace bra and panties, was more than a little satisfying. His cock bobbed as his lower muscles clenched in response, a visceral reaction she luxuriated in.

"Lower your arms to your sides," she ordered. As soon as he did so, she planted one foot on either side of his head, enjoying the way his expression lit up, his eyes most definitely not fixed on her face. From his position, he'd mostly be able to see her pink pussy, fringed with neatly trimmed dark red curls and the triangle of hair she preferred on her mound.

Olivia knelt down, one knee on either side of his head, her pussy hovering inches above his lips. She could feel his hot breath panting on her sensitive folds, his blue eyes almost incredulous and wild with excitement.

"Okay, cupcake," she said, smiling down at him. Her hands gripped his hair firmly, pulling his head up to meet her lowering cunt. "Show me what you can do."

She didn't object when his hands came up, arms curling under her legs and then over to hold her thighs. The hold gave him a little more leverage to reach her—and she liked the way he felt, clinging to her legs to please her. She sighed with blissful enjoyment as she felt his tongue sliding through her folds, tasting her... learning her... flicking against her swollen clit so that she pressed down more firmly against him.

From the way he'd been looking at her, Olivia doubted he'd ever had a woman riding his face quite like this... His own cock unsatisfied and straining while the cold remnants of an ice cube trickled from his clenched ass, a rubber band wrapped around the base of his balls to keep them sensitive. All of which she ignored entirely, making him wait for his orgasm while he tongued her to hers.

"Oh yes..." she moaned, arching her back, her breasts thrusting out as his mouth worked.

He definitely did know what he was doing, already adjusting to the subservient position she had him in—and when she moaned her appreciation, his efforts redoubled, his hands tightening down on her thighs, helping her to hold in place over his lips. Luke was a pleaser, and the more she wriggled and verbally encouraged him, the more excited he became. He licked and sucked, alternating between the two, paying attention to her sensitive lips and clit, finding all the ways she best liked to be orally pleasured. 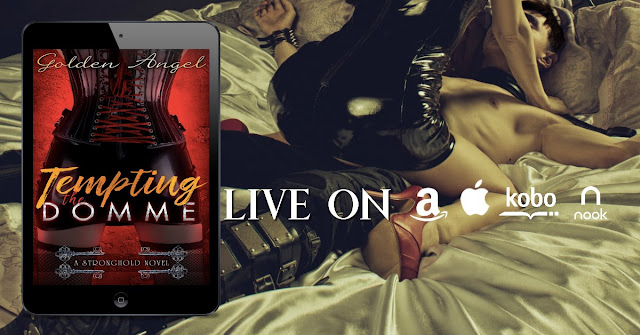