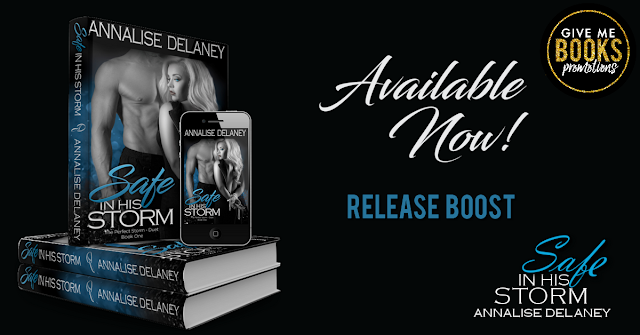 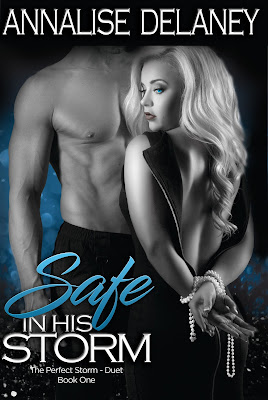 Hiding from childhood horrors, Gabrielle Adams has struggled to keep herself safe. When the superficial world she's created is challenged, she strives to maintain her tenuous control while keeping the past buried where it belongs.

After a numbing year mourning the death of his wife, Jake Thornton is ready to live again. An unapologetically dominant man with specific needs, he resolves to find a woman seeking to surrender control, without expecting what he can never offer—love.

A chance encounter awakens desires neither expected and both resist. Fate steps in for a second time, and they succumb to an onslaught of lust and need, convinced they can overcome any challenges. But when darkness approaches and, with it, the very things they fear the most, do they have the strength to weather the storm? 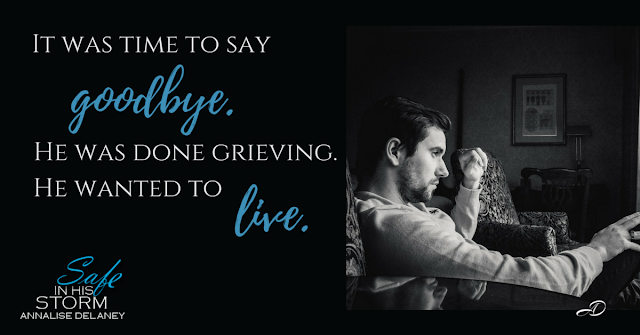 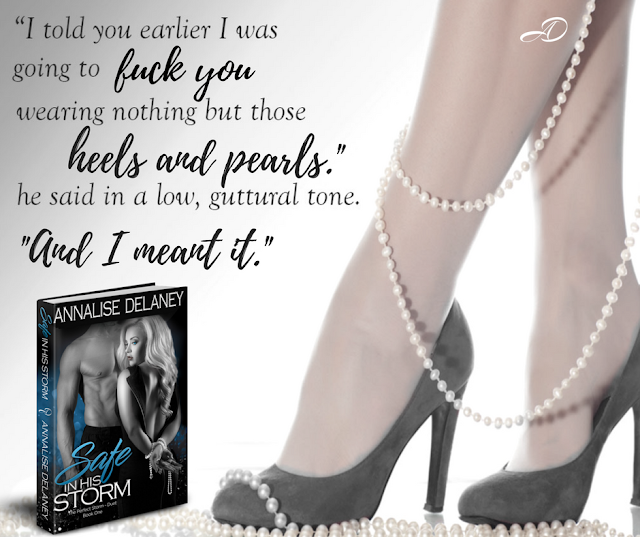 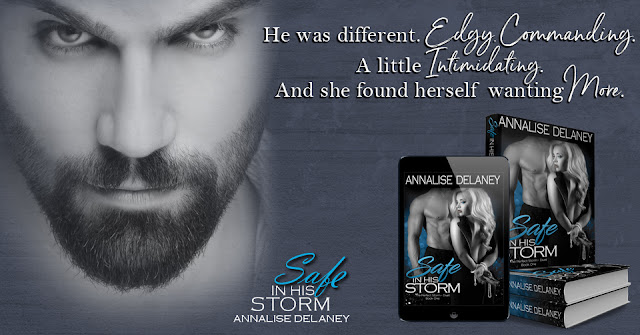 “Do you swim?” he asked, looking a little sheepish.

He loosened and dropped her sarong next to their shoes, then scooped her up before sauntering out toward the water.

Ignoring her pleas, he kept his stride and pressed through the waves until they were about chest deep in the ocean rising up and down with each swell. Still clinging to his neck, she began splashing him with her free hand.

“I can’t believe you did that!” she bellowed, stifling the giggle threatening to escape.

“Then you probably won’t believe this,” he mocked, as he released her into the next wave.

“Ahhh!” She held her breath as a wave rolled over her and pulled her under.

She knew he’d be waiting for her to surface, so she stayed under as long as possible, intending to make him worry. Finally, her hands shot up, and she gulped for air. He moved faster than lightning, plucking her upward, and pulling her out of the water.

Just then, her foot came around his leg and pulled it from beneath him, throwing him off balance and into the surf. Trying not to laugh too hard, she broke free and swam as fast and hard as she could back toward the shore. She could hear him behind her, cursing and laughing in annoyance. Just as she stood up to run, his arm wrapped around her waist from behind and he swung her back up into his arms.

Kicking her feet and laughing uncontrollably, Gabi yelled, “Let me go! Put me down!”

Smirking, Jake dropped down to his knees, setting her on the sand and covering her yells with his mouth. He kissed her deep and rough, and she tasted the salt from the ocean on his lips. He was intense in the way he possessed her mouth, and she began to relax into his kiss. Remembering what he’d just done, she bit his lip.

Suddenly, she was hauled over his shoulder, butt up in the air as he stood, and then…

“Are you still talking to me like that?” he admonished.

“Jakey, pleeeease put me down,” she taunted.

“Let me know when you’re finished.” 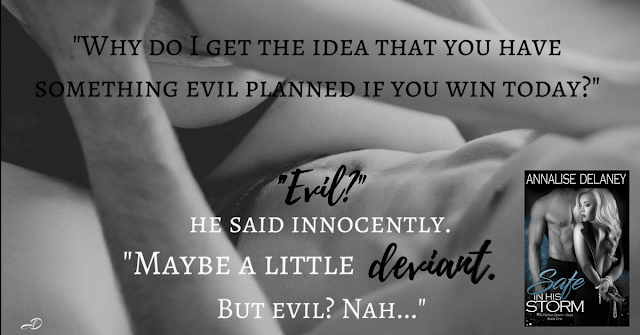 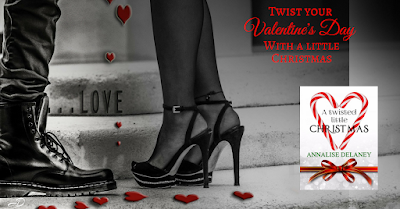 Free for a limited time! 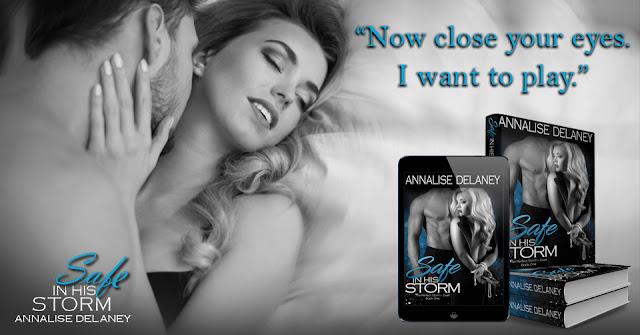 Annalise Delaney’s love of romance spans from tales of knights in shining armor bravely rescuing the girl to those of damsels who need rescuing but put up a fight—because what fun would it be otherwise?

Writing occupied her time when age-appropriate books put her to sleep. However, the books tucked in the bottom drawer of her mother’s dresser overflowed with love, lust, betrayal, and revenge—making for far better reads. VC Andrews’ imaginative and twisted stories started it all.

Annalise juggles a busy schedule, adhering to the age-old maxim, 'Work hard, Play hard.' When she's not working, she might be found anywhere on the beach, under a palm tree, or where chips & salsa and margaritas are served. But always laughing with family or friends until her cheeks hurt.

As for what she writes today, let's just say it's come a long way from sweet. Welcome to the place where sweet meets spicy. A place where stories come to kiss and tell. 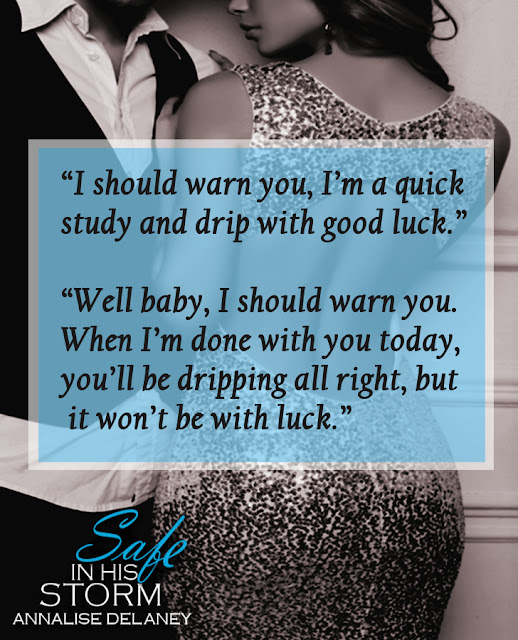 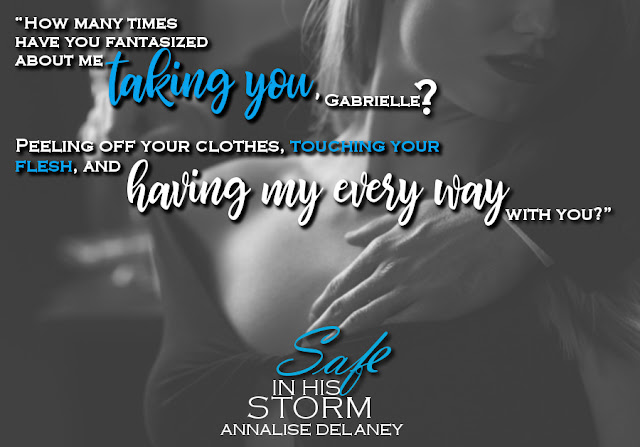