King Williams has seen the other side of hell, his tortured solitude hiding pain behind the cut of his marble jaw. Stubborn fortitude has gotten him this far, but one night with Piper at a club party is all it takes to unravel the walls he's built. Now he can't get her out of his head. His obsessive need rages before he pulls her in so deep both of their lives land on the line. The only thing that matters might be the only thing he can't protect.

When Piper Parish spots King, high-ranking member of the Sinister Knights MC, nearly naked late one night, it isn't the first time he’s caught her eye. It is, however, the first time she's set eyes on the cobblestoned abs and chiseled lines etched into this bad boy's body. Like a flash of lightning in the darkness, Piper finds herself thrown into a whirlwind ride with the brooding biker...a ride he will never let her forget.

Warning: King is one sexy, moody Harley ridin' bad boy. he's Piper's idea of devilish, dark, attractive and so off-limits. Until now. He'll stop at nothing to make her his, but is she ready to buckle in for the ride of a lifetime?

Piper Parish knows who she wants but doesn't know how to make her desire a reality. He's shown signs that he may feel the same but he's never made a move. But the chance she's been hoping for is about to come in a very unexpected way.

King Williams has had is eye on a certain girl for years now, but he doesn't think he's the type of man she needs. He tries to fight his feelings but the draw to her only grows stronger as time goes on. So when he sees her one night and brings her home, he knows he'll do whatever it takes to keep her in his arms.

King is a fast, sultry, and exciting read that will get your heart pumping faster and faster with each passing page.

I love how King is always there for Piper even when she doesn't know it. King has never wanted love and all that comes with it until Piper walked into his life. He tries to fight his attraction because he thinks she deserves better, but once those flood gates open he knows there's no going back. He'll always make sure to protect, love, and worship Piper with every fiber of his being.

Piper is a strong, independent woman that knows what she wants. She may not know how to get him, but once she does, the last thing she'll do is walk away from him. I love how protective she is of him and loves all sides of him. She's passionate, kind, and loyal. She's really an incredible person through and through.

I really enjoyed King and couldn't get enough King and Piper. Their passion radiates off the pages and will cause the reader to need a very cold shower when finished.

If you love it dirty, naughty, and everything sexy, then I highly recommend you pick up King today. This is one Sinister Knight you don't want to let get away. 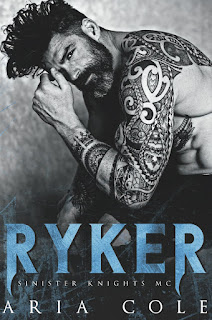