Claiming Their Mate from Kallista Dane

“From the moment we first saw you, Delta Greystone, Zhynn and I were bewitched by your essence. We hunger to taste your juices.” 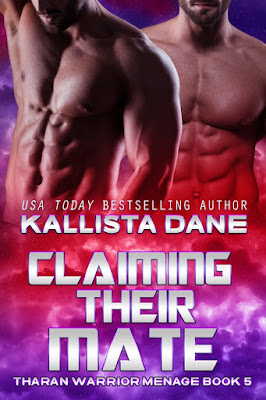 Delta thought her life was over…

until she was given for a night to dominant alien twins who made her feel more alive than she’d ever felt before.

Zandyr and Zhynn are Tharan Warriors, sent to the desert planet of Borvaan. Their mission – uncover the barbarian ruler’s plan to wage war on neighboring worlds…and rescue the human female sold to his harem.

Delta Greystone served as First Mate on the Earther ship Luna and the Tharans have been ordered to find and free her. But they’ve been warned that the pheromones of a human female will stir their gyron, awakening a savage need to dominate her and claim her as their mate. Together, as is the Tharan way.

Back on Earth, sex with her ex-fiancée was just one more thing for Delta to tick off her to-do list. But the hot alien twins awaken wicked desires she’s never had before and their thrilling mastery drives her wild.

When Delta finds out their spying has been discovered and their lives are in danger, she sets out across the burning sands to save the twins. Alone and on foot. Will Zandyr and Zhynn track her down in time – or will the merciless desert kill all three before the twins can claim her as their Tharan mate?

Author's Note: Claiming Their Mate is a standalone full-length MFM menage romance with a HEA featuring one feisty human female and a pair of hot alien warriors. It’s Book 5 in the Tharan Warrior Menage series and features all new characters.

She hesitated. It was hard being so near to both of them. She didn’t know how she’d be able to stand having them run their fingers through her hair without grabbing one of their hands and putting it on her breast.

She’d never been so aroused in her life. It was easy to tell the twins apart. Zhynn’s scent was so different from Zandyr’s. Neither was a cloying artificial fragrance, like the one Lloyd had always worn. The Tharan twins each had his own smell, musky aromas that got her mind imagining all kinds of hot, sweaty sex. The kind of sex she’d never had with her fiancé.

Zandyr’s was subtly sensuous, while Zhynn’s had a dark edge to it. That’s what made her agree to this silly game. Every breath she took seduced her further. Zandyr’s scent filled her head with thoughts of brazen things she wanted to do with them, Zhynn’s with wicked, dirty things she wanted them to do to her.

She combines eroticism with adventure and intrigue, weaving tale of strong, independent women tangling with the hot Alpha and Omega males who appear in their lives when they expect it least but need them the most.

Kallista loves gardening, chocolate, traveling, chocolate, scuba diving... and did we mention chocolate? She likes to say she's a little like Goldilocks - she's lived in northern Michigan, where it is way too cold and the Florida Keys, but that was way too hot. Now she makes her home in North Carolina where it's (usually) just right!